Is Third Base Cursed Land for the Pittsburgh Pirates? And Man-Games Lost. 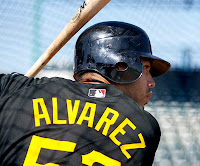 Pirates 3rd baseman Pedro Alvarez continues to toil away in AAA ball, having come off the disabled list a few days before the All-Star break. It is important to remember who Alvarez is -- the guy who was supposed to be the power bopper the Pirates have long needed, the guy drafted to be the savior of the franchise. I screamed, you screamed, we all screamed for Pedro.

The numbers:  Before going on the DL, Pedro had been to the plate 125 times. He had two dingers and 42 strike outs. And yes, for all of you Douglas Adams fans, that's forty-two strikeouts. So yeah, he was whiffing about a third of the time at the plate. The strike-out rate is no better in his brief stint in Indianapolis where, in the course of 10 games, he's been to the plate 34 times and struck out 13 times, with zero home runs.

The Pirates drafted him to be the guy. In fact, I recall fans saying that if the organization didn't draft Pedro, it was a sign that they weren't trying, that it would be a replay of the draft wherein they showed how scared they were to draft a potential star -- so scared that they selected Daniel Moskos rather than Matt Wieters. So, I think we can all agree that, when the picked Pedro, they did draft the guy for whom there was universal acclaim and hope.

Third base has been a giant miasma of whiffs, salary dumps and suck in Pittsburgh. Before Pedro was called up, Andy Laroche was on the hot corner; nobody thought he was a long-term solution.

Before that, of course, it was Jose Bautista, who they Pirates just ... just ...whiffed. A whiff of such monumental proportions that I get a pain in my lower abdomen every time I flip on SportsCenter to see that Joey Bats launched another long-ball for the Blue Jays.

And, of course, when we discuss despair at 3rd base, we can never forget David Littlefield's lasting gift of shit to the City of Pittsburgh:  his trade of Aramis Ramirez to the Chicago Cubs for a bag of used jock-straps and batting practice balls.

I took the time to look at who has worked 3rd for a significant period of time, other than the aforementioned Alvarez, Laroche, Bautista, and Ramirez. It's a who's who of 'who the hell is that guy?' Ready?

Joe Randa, Jose Castillo, Ty Wiggington, Bobby Hill (Bobby Hill???), Chris Stynes, Ed Sprague, Doug Strange (wasn't he the keyboard player for The Doors?), Charlie Hayes (they would have been better off with Isaac Hayes in there), Jeff King, and Steve Buechele.  Phew. That just gets us back to 1993. I just can't keep going now.

The Pirates have been so bad for so long, that its hard to stick by young guys who are struggling. How do you know when a guy is a bust? How long can you tolerate his strike out percentage? Particularly if you, as the Pirates inexplicably do, find yourself in the middle of a race for a division title? You have to win and win right now. If the Pirates were in the middle of another crapulous season, they could just toss Pedro Alvarez out there and let him work through his struggles, right?

But we have to face the harsh fact -- there is no guarantee that the success the battling Buccos are having this year will repeat next year or the year after that. They have to try to win the division this year. Can they do it with Pedro's rally killing every-third-at-bat strike out percentage?

He creates a distinct problem. They can't give up on him like they did Bautista, that is for certain. At this point, he still is the future of the franchise, the 'instant offense' guy they so desperately need. The fact is, Pedro is one of the keys to the club's long-term success. They don't need to shop for a big bat if Pedro ever learns how to hit major league breaking stuff.

I have no idea what to do with the kid. Maybe lots of at-bats at AAA will help, so they should just keep him there and continue with the status quo? Maybe they should have the batting practice pitcher throw him nothing but curveballs until he learns how to freaking hit one? Maybe, like Ricky Vaughn, they should get him some new eyeglasses?


Meanwhile, I love the hockey stat of 'man-games lost,' so here's the baseball version, for your battling Bucs:

Starting pitcher Ross Ohlendorf has been on the DL longer than I can even remember (did anybody even remember he was supposed to be the fifth man in the rotation?), but with pitchers you can't count every game as a man-game missed. Let's just say that he's missed every game that Karstens has started, which is to say, 16 games for Ohlendorf.  [I'm on record as saying I think this ended up being a positive for the team (no offense, Ross) because Jeff Karstens is maybe the most reliable guy on the staff.]

Alvarez went on the DL following the April 30th game versus the Colorado Rockies and has missed 65 games. 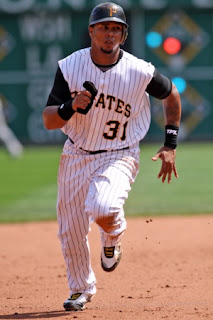 Then, they lost catcher Ryan Doumit (missed 42 games), and then the other catcher, Chris Snyder (29 games missed). I think they've had six different guys behind the plate, none of which are very exciting prospects at the plate mind you.

Throw in Evan Meek -- unavailable to the Pirates out of the pen for much of the season. He has appeared in 17 games this year, and been unavailable for the rest. According to the Post-Gazette, he'll be out at least until late July. For what all that is worth. They sure could have used a healthy Meek last night in Houston when Jose Veras alternated between trying to nibble around the strike zone and just throwing big grapefruits up there. But your mileage may vary.