Back at Bucco Central ... 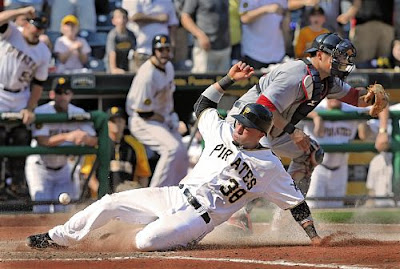 The excitement is just so intoxicating, so, dazzlingly, temptingly intoxicating. The Pirates winning -- and sitting on top of (or close to the top of) the NL Central  -- it's like a blend of Proseco and crystal meth for 'Burgh fans. We've waited so long.

Now, the question you have to ask yourself as a fan is:  do the Pirates have to win a title this year to satisfy you? Because these Pirates? They're not built for that kind of battle. Not yet.

As was well established on Friday night here, if the Pirates pitching isn't perfect, and things start to turn into a dinger-o-rama, they're screwed. They simply are not constructed to win games which turn into home run derbies, a fact which was doubly reinforced on Saturday, when they endured a 9-1 thumping (ouch) from the squad lead by the haircut that's one part Pete Rose, one part Neil Diamond and all parts hideous. Or as other people call him, Tony LaRussa. It was a series which, appropriately enough featured Albert Pujols going yard -- his 27th homerun at PNC Park, more than anybody in the history of that ballpark.

It was the kind of three-game stretch (including the bummer of a loss to the Reds), that reminded me of the past 18 years of putritude and, I couldn't help it -- I had a knee-jerk reaction and I found myself waiting for the other shoe to drop on the Pirates. It was downright Pavlovian.

But these Pirates reminded me on Sunday that they are the kind of team that can battle and that will battle, no matter how much they play the part of David to the Cardinals Goliath. (I'm not sure there's a better 3-4-5 batting order than Pujols-Matt Holliday-Lance Berkman. Talk about an un-level playing field.) They did it by holding the Cards batters inside the park (except for a solo shot by Colby Rasmus in the 6th innning), playing small ball, playing defense, and using their speed to eek out a 10 inning win. While right field has been a giant vortex of disappointment, Xavier Paul has been the single bright spot out there, twice winning big games for this team with this kind of electric hustle.

It is the perfect blueprint for them. It is how they have to win games against the elite hitting teams in MLB. It is a style of baseball I enjoy, but they are limited. No doubt.

I'm on board. I believe in these Bucs, If they keep the core together -- Andrew McCutchen, Neil Walker, Jose Tabata, Pedro Alvarez, Joel Hanrahan and, yes, little Michael McHenry -- I'm on the bus. I am infatuated. With this group and Clint Hurdle at the helm, I can think of worse ways to spend my summer evenings than watching young players (the prospects we've heard tell about for 'lo these many years), and ride along with them as they win and lose, fall down and get back up, and witness a team learning now to win.
Sunday's win was the kind of win that reminds me of why baseball is still fun, and it deepens my attachment to these battling Buccos daily. Still, I need to remind myself from time to time that these guys are over-achieving. They are thrilling and captivating, but they are over-achievers.

For now, that's good enough for me. If they lock up 'Cutch, and Walker, I can believe that Ogden Nutting is serious about keeping the main ingredients together for a long run. If they do that, and if they show patience with Alvarez, and if we see the other young guys like Chase d'Arnaud and Alex Presley being coached up and mentored, if they keep battling and playing exciting baseball, I can wait another year or two or three for a title.  If they fall short of the division title, will that be good enough for you?

Still, I'm keeping up my division title ticker, though.