I am on record wanting Jagr to come back. I think he can still be a productive player and I stand by that. My mistake was thinking that he had matured some in last decade. I guess not.

Meet the new Jagr. Same as the old Jagr.

Wednesday was supposed to be decision day. Then Thursday was decision day. Then this morning was decision day, or at least decision morning, because I'm pretty sure that when Ray Shero wasn't busy working out a two-year deal with Tyler Kennedy (huge, by the way), he had his eye on the clock thinking, if I don't hear from that guy by noon, it's over. You gotta draw a line in the sand somewhere, don't you? He can't keep waiting on the capricious winger to make up his mind. He's working under a snug salary cap and the Penguins (assuming Evgeni Malkin and Sidney Crosby are healthy) are poised to make a run at the Cup as constituted without Jaromir.

I guess Jagr is still the guy we knew before, the player we had a love-hate relationship with -- supremely talented, capable of wondrous things on the ice, but just as capable of throwing fits of pique and drifting into deep existential chasms.

It's too bad for everybody. Jagr could have contributed here, if nothing else on the power play. From his perspective, I think this could have been a good fit for him. It's a team that doesn't need him to lead --  they're full up on leaders in the Consol Center home club dressing room. All he would have to have done in Pittsburgh is shown up and fired wristers on net on the power play, which seems like a pretty good gig go me.

But he couldn't meet a simple deadline. He couldn't make a simple phone call. I'm not sure if he intended to play headgames with the Pens or if he's just really unsure himself. Is he in one of those eastern European funks he's prone to? Is he still just really immature? Who the hell ever knows what goes on in the head of Jaromir Jagr? I think half the time, he doesn't even know himself.

But I can tell you this, there's no room on a roster put together by Ray Shero for a guy who doesn't want to be here, whose number one priority isn't bringing the Stanley Cup back to Mario's pool.

No hard feelings, but somebody else can baby-sit the guy.

UPDATE:  10 minutes after posting, this came across the wires:  Philadelphia Flyers sign Jaromir Jagr. This is the contractual agreement of taking a dump in Mario's pool.

Ooooooooh, this is going to make Pens-Flyers games even more fun. Is it hockey season yet? 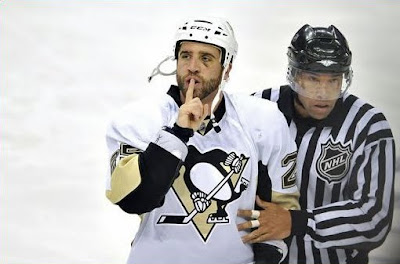 We had a good run, didn't we Max? Two Stanley Cup Finals appearances. Your heroics in 2009 (some of which you can see above.) You were a mensh, a fun guy, a penalty killer extraordinaire. But now you wear the Flyers orange. I'm filing for divorce today. You should get the papers shortly.

Thanks for all the fun times. You will be missed.
Posted by JODY DIPERNA at 10:19 AM