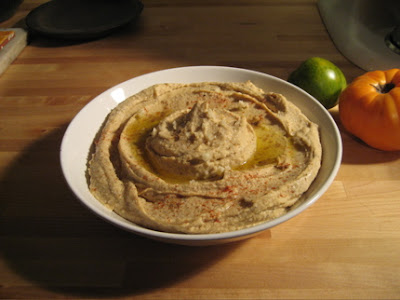 It's the regular season! There is much rejoicing in the land. For this week, I decided to do a spread of dips and snacks we could munch during the game and my buddy UConnFan is promising to bring dessert. (Lord, please let her go to Vanilla Pastry Studio for the world's most delicious cupcakes.)

Meantime, I'm working like a dog this morning, making hummus, lebanese flatbread and an eggplant and cheese spread, meant for crostini, but I think it will be fine on the flatbread. On to the recipes:

HUMMUS:
Don't ever buy hummus. Making it is world's cheaper and it's very easy. Here's how I do mine.

2 cans chick peas, drained and rinsed
1 clove of garlic (I only use one, but if you like more, use more. I find that most hummus relies too much on garlic, though.)
1 tablespoon of tahini (I don't use a big measuring thing, just a regular old soup spoon)
the juice of 2 to 3 lemons (I like a lot of citrus)
1 teaspoon cumin
1 teaspoon chili powder
healthy pinch of kosher salt (you really need the salt to bring all the flavors out)
a couple shakes of tabasco
several tablespoons of olive oil

Put it all in a food processor and let the processor go to work. Typically, I add the olive oil at the end and pour it in until the hummus is nice and creamy. I hate chunky hummus.

Place the slices on the grill after you have preheated it for a few minutes. Cook on both sides until the eggplant is soft and has a nice char. Remove from grill and let cool. When the eggplant is cool enough to handle, coarsely chop and reserve in a large mixing bowl. Add the ricotta, vinegar, oregano, Parmigiano and crushed red pepper and stir to combine. Season with salt and reserve.

This is a fantastic, delicious, simple dish.

1. Whisk together the salt, sugar, yeast and 1 cup warm water in a large bowl. Let the mixture sit until it begins to froth, about 5 minutes, then add the flour and mix until well combined. (If the dough is very dry, add more warm water a tablespoon at a time to moisten it.) Cover and let rise somewhere warm for about an hour.

2. Meanwhile, prepare a grill; the heat should be medium-high and the rack about 4 inches from the fire. When the dough has puffed up, transfer it to a well-floured surface and knead until soft and silky, 5 to 8 minutes.

3. Cut the dough into 8 equally sized pieces and roll each one out until it’s about 6 inches in diameter; don’t worry about making these perfectly round, but try to keep them relatively even in thickness. Brush one side of the breads with olive oil and put as many on the grill, oiled side down, as will comfortably fit at one time. While the first side cooks, brush the side facing you with more oil; when the breads begin to brown and puff up, flip them. When the second side is nicely browned, remove from the grill and sprinkle with the za’atar, if you’d like. Serve immediately.

CAVEAT: This is my first attempt at this and, also, this is a Mark Bittman recipe. I think Bittman's a really good food writer, but pretty much every one of his recipes that I've tried has been, frankly, meh. So, I'm not responsible for the delicious factor on this one.
Posted by JODY DIPERNA at 6:11 AM