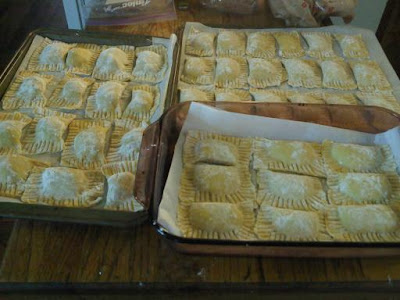 Yesterday, as always on Christmas Day, I made traditional ravioli. Well, they're a tradition in my family and growing up, I always felt sorry for kids who ate turkey on Christmas Day. How boring! Our Christmas tradition was always ravioli, a tradition started by my great-grandmother who left her tiny village in Abruzzo to make her way in America. Gram's traditional ravioli are filled with cheese and served with a rich, savory tomato sauce, one that is often flavored with a beef shank or some pork ribs or both. [My recipe for that sauce -- which I call Aunt Fulmay's Sauce -- is coming henceforth in a later post.]

Meanwhile, I made my traditional cheese filled ravs as family obligation dictates, but my feeling is that getting the dough right and then doing the assembly of the ravs is the hardest part, so every holiday (Christmas and Easter), I try another filling. This year, I made a mushroom filling and I have to say, for a recipe I basically made up on the fly, they were amazing -- Top Chef worthy ravioli.

Read more »
Posted by JODY DIPERNA at 9:08 AM No comments:

Sometimes I Close My Eyes and Dream of Hip Checks 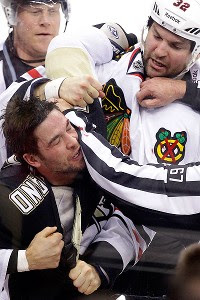 Last night, I dreamed that NHL disciplinarian Brendan Shanahan suspended Penguins defenseman, Deryk Engelland. For a couple of games. As he should.

In the first period of the Pens thrilling 3-2 win over the Chicago Blackhawks last night, Engelland left his feet and drilled Chicago's Marcus Kruger with a high hit along the boards. I'm not sure if Eggo was targeting Kruger's head, but it doesn't matter what his intentions were. He aimed high and leaped into his check. Somehow the officials missed it. Kruger left the game and I haven't seen a report on his status this morning. If, as predicted by people much smarter than I, Shanahan hands Engelland a two game suspension for the hit, Eggo should take it and say,  "Thank you, sir. May I have another?"

Read more »
Posted by JODY DIPERNA at 2:49 PM No comments:

It’s that time of year when AMC has “White Christmas” on a constant loop, which might account for the fact that I believe that movie has a running time of about 28 hours. But it made me think -- if I ran a movie channel, which Ten Christmas movies would I put into rotation this time of year? (Sadly, not on the list is The Hebrew Hammer -- mostly because I haven’t seen it, so I couldn’t consider it.) Without further ado, the Top Ten Christmas movies. 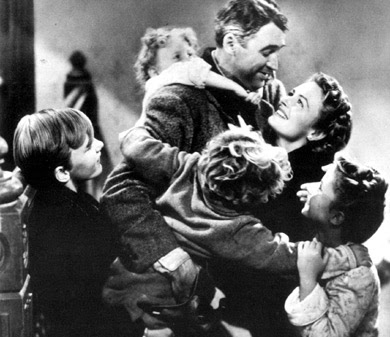 
"From now on, the only person who gets to yell is me. Why? Because I have a gun. People with guns get to do whatever they want. Married people without guns - for instance - you - DO NOT get to yell. Why? NO GUNS! No guns, no yelling. See? Simple little equation."

Read more »
Posted by JODY DIPERNA at 9:51 AM No comments:

Email ThisBlogThis!Share to TwitterShare to FacebookShare to Pinterest
Labels: a christmas story, bad santa, christmas in connecticut, christmas movies, frozen river, it's a wonderful life, scrooged, the bells of st. mary's, the bishop's wife, the man who came to dinner, the ref 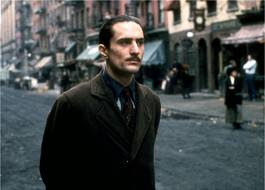 It started, simply enough, with a stale hunk of bread. Really.

I had purchased a loaf of rustic Italian bread from Breadworks and used about two-thirds of it. There it sat on my butcher's block in it's paper bag. It was too hard for sandwiches, yet I left it there. Finally, that stale hunk of bread taunted me. Silently, I could hear the bread whispering recriminations as I tried to catch up on my viewings of Top Chef and Parks & Rec. I tried to get on with some writing assignments, but the bread was almost shouting at me. This went on for a solid day. The next day I woke up and thought -- meatballs.

Read more »
Posted by JODY DIPERNA at 8:41 AM No comments: