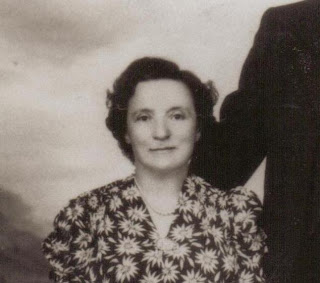 My great-grandmother came from the village of Pietranseri, in the Abruzzo region of Italy, to America when she was just a teen. My cousin Pete has done amazing work in going back and finding old relatives, visiting the village, and even found the house where she grew up. We all, several generations removed, still feel a very close connection with Gram. One of the many things she brought with her from the old country was her family's tradition of having ravioli on Christmas Day (also Easter.) It is the gift that keeps on giving.

Gram's ravioli tradition was passed down to her daughter Vera (my grandmother) and then skipped a generation to me. [My mother is the designated family taster, but I was apparently born to be a sous chef.] I think I'm the only one in the family who still makes ravs, but as long as I can tolerate getting flour caked in my fingernails and kneading the dough until it's 'like silk,' Gram's Christmas (and Easter) ravioli tradition will live on.

I was taught to make the dough by making a flour well and then slowly whipping the eggs with a fork, being careful not to break the well, then bit by maddening bit, working the flour into the well. You can do this if you like, but I have to warn you, it is labor intensive. And, did I mention, maddening? Yeah, that too.

So while I know how to make pasta dough that way, I choose not to. None other than the magnificent Lidia Bastianich now uses a food processor to plow through the first part of the dough making process and, you know what? If it's good enough for Lidia Bastianich, it is good enough for me. You will still have to put some elbow grease into it by kneading the dough by hand for about 10 to 15 minutes afterwards, but the tedious flour well is not necessary. Beyond which, I think I have PTSD from my grandmother telling me every time, "don't break the well." "Yes, Grammie, I know. I've only been doing this since I was 4 years old and I am well aware that terrible things will happen if I break the well." But those days are behind me as the food processor makes the dough process much less labor intensive, less daunting and I've found that I can crank them out these days.

The Abruzzo region of Italy is very mountainous and in Gram's village, there was little accessibility to a port, so they didn't eat much fish, but sheep are common. Also, they were poor. So, the ravs she grew up with were stuffed with ricotta and despite Laura Schenone's assertion that cheese ravioli are the training wheels of ravioli, I'm gonna defend them. I think that people cook with what they have at hand and lots of sheep + poverty = ricotta stuffed ravioli. Beyond which they are fucking delicious.

Enough with the history lesson, on with the cooking.

The Labor:
Spoon 2 2/3 cups of the flour into a large food processor fitted with metal blade. Beat the eggs (plus the extra yolk), olive oil and salt together in a small bowl until blended. With the motor running, pour the egg mixture into the feed tube. Process until the ingredients form a rough and slightly sticky dough. If the mixture is too dry, drizzle a very small amount of warm water into the feed tube and continue processing. Scrape the dough out of the bowl onto a clean, lightly floured surface. (I do it right on my kitchen counter.)

Knead the dough by gathering it into a compact ball, then pushing the ball away from you with the heels of your hands. Repeat the gathering and pushing motion several times. You want to stretch it as you roll and alternate between kneading and sort of stretching. The dough will take on a smooth, silky texture after 10 or 15 minutes. It should be elastic, too. Test it by pressing your fingertip into it and if the imprint springs back up, you've probably achieved delicious dough. Flour the work surface and your hands lightly any time the dough begins to stick while you are kneading.

Roll the dough into a smooth ball and wrap it in saran wrap. Let the dough rest 45 minutes to an hour at room temperature. (It can rest longer if you put it in the fridge, but if you refrigerate it, let it stand at room temperature for about an hour before rolling and shaping.)

While the dough is resting, mix up the filling. It's easy as pie. Mix the ricotta, the parsley, the romano and parm cheeses, the eggs and a pinch of salt and pepper. Taste it and adjust for salt. However, do not let my mother taste it, because she can eat the entire bowl as is. Refrigerate the filling until you need it.

The Assembly Line:
It should be noted that I use a pasta maker like the one below: 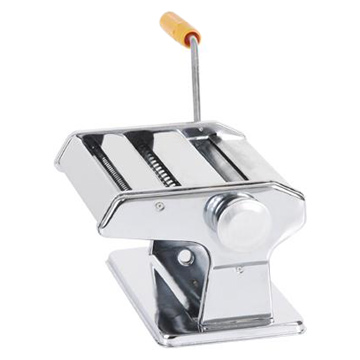 If you don't have one of these, borrow one. You really don't want to be rolling the dough with a rolling pin, unless you have (a) a huge work surface and (b) a huge rolling pin and (c) a helper.

With this handy-dandy machine, you roll out long strips of dough (about 2 inches across) and as thin as you like (I like the pasta dough on the thinner side, but not so thin as it breaks too easily.) I make one at a time with this method. On the long strip of dough, giving yourself about 1 1/2 inches from the start of it, put a dollop of the filling. Fold the dough over and press around three sides. Cut that with a knife. Then press the sides down more firmly with the tines of a fork (pressing in and rolling the fork out.) This seals them so they don't leak in the water when you cook them. Then it's just lather, rinse, repeat. I line them up on floured cookie sheets and set them aside until I'm ready to cook.

Note: you can use an edger, to make perfect crinkled edges like you might get in a frozen variety of pasta or in a restaurant. But mine are rustic. Also, I leave an generous portion of dough at the edges, so when I've finished a tray, they look like this: 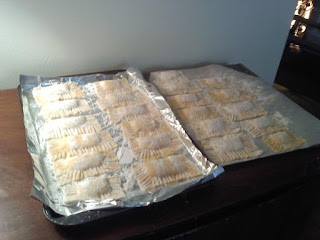 Once all the ravs are made, bring a large pot of water to a boil. You want to use a ginormous pot because you want the ravs to have lots of room to move. Salt the water well when it hits a rolling boil. Add the ravs and stir gently, so they don't stick. When they start to float, they're nearly ready (about 5 minutes). Of course, I have the fail safe tester of my mother, but you want the dough to be al dente, not mushy ...

I serve them with a basic tomato sauce (my sauce recipe is here) and freshly grated romano cheese.

Happy Christmas and thanks Gram.

[Pictured above is my great-grandmother, Marie Petracco, as a middle-aged woman. She was in her mid-60's when I entered the picture.]
Posted by JODY DIPERNA at 4:00 AM