She was right, of course, but somehow, with the ESPN guys, the Washington Post guys, several TV crews, anywhere from six to ten photographers on the ground and god knows how many print journalists ringing the track around the field, plus an HBO camera crew with prominent boom mike following Randolph's every move from pre-game warm-ups through the handshake line, it was easy to forget it was a high school football game.

It is a principle of physics that the act of observing will influence the phenomenon being observed. And so it was with the inaugural game of the Natalie Randolph Era for the Coolidge Colts.

I'm lucky enough to be working on a feature about Randolph and the Coolidge program. I spent all of last Friday at the D.C. high school, wandering the halls with the coach, with vice-principal Vernard Howard, meeting with the staff and principal Thelma Jarrett. That day? It felt special. It was undeniable.

The first week of school always feels different, but a big part of the reason this first Friday felt special was the anticipation of the Colts football game that evening. Typically, the first game for Coolidge would go unnoticed by all except the students, faculty, staff and alumni, but nationally the Natalie Randolph story has been treated as anything but typical.

The attention has been swift, overwhelming and unexpected, particularly by Randolph herself. In fact, when I asked her if she saw this attention coming, she said, "No, No!" and then had to laugh about it all.

Mostly because the school, the administration and the football players are known to Randolph, an environmental sciences teacher at Coolidge, she didn't really have to introduce herself to her team -- most of them already knew her. 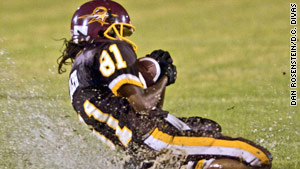 I 'knew' her only as a football player. I first saw Randolph play in the 2006 NWFA championship, a game that her team, the D.C. Divas, won handily over the Oklahoma City Lightning. The Divas and the Pittsburgh Passion were respected rivals and Randolph's name has come up often in conversation with many of the Passion players I've interviewed over the years.

Walking the halls with her last week in search of a color printer she could use, one of her players came up to her with an effusive "Coach!" and gave her a big hug. Her response? "Where's your tie?" It was a good natured, warm admonition, as her players were all to wear shirts and ties last Friday and I sub-conciously spent the remainder of our walk picking out tie-clad young men.

Still in search of a printer, we passed some students on the stairwell, one of whom cussed in conversation with the other. I didn't even hear it but Randolph, like all teachers, has a singular ability to pick up on those kinds of transgressions and quickly correct them, which she did with a sharp, "Watch your mouth." The coach Randolph story may be all the rage and she, a young African-American woman coaching boys playing the manliest of sports, may be the media's darling, but she is still a science teacher trying to impart some knowledge and maybe plant the seed of interest in science in a few Coolidge students.

That is a fact not lost on Principal Jarrett, who chose Randolph not for her Divas resume or her years as a track star at the University of Virginia, but for her vision of athletics working hand in hand with academics. Her players attend a mandatory study hall every day for an hour when school lets out. Football is the carrot to get them there and the hope is, once there, with appropriate support, the boys can be successful student-athletes, with the emphasis on student.

When we picture a football coach, we have a certain image in mind. Grizzled. Square jawed. Male. But Randolph is none of those things. She is petite and pretty and young. Well, she is square-jawed and her jaw was set through much of Friday night's loss, prompting one of the photogs next to me to say, "She's so non-emotive. This is frustrating."

The game itself started almost too perfectly, as junior Calvin Brown took in the opening kickoff from the Carroll Lions and raced up the field into daylight. He had a pretty clear lane the whole way into the endzone, but slipped around the 46 yard line. The Colts put together a nice drive from there, but they made it hard for themselves, as they were penalized early and often. At some point in the game, I lost track, but there were three or four pre-snap penalties on Coolidge in their very first drive which I believe were directly attributable to nerves, the packed house and the throng of media rabble. After all, these are high school kids accustomed to several hundred people in the stands, not several thousand.

That first drive fizzled at the Lions' 3 yard line and the game remained scoreless into the second quarter before Carroll scored to make it 7-0 at the half. The Coolidge squad is young and undersized, they lost their best offensive player, Calvin Strong, to injury early in the first half and eventually they gave way to Carroll, which dominated the second half. With the score 21-0 late in the game, I made a note to myself that coach Randolph's biggest challenge at this point was to keep frustration and resignation at bay for her players.

The challenges are great for the coach. Her team is fast, but raw and small. It always takes time for a coaching staff to coalesce, and for the team as a whole, staff and players, to come together. It'll be interesting to see how Randolph handles it all, now that the initial rush of enthusiasm and commotion has passed.

I can hardly wait to get down to Coolidge again.
Posted by JODY DIPERNA at 6:26 AM