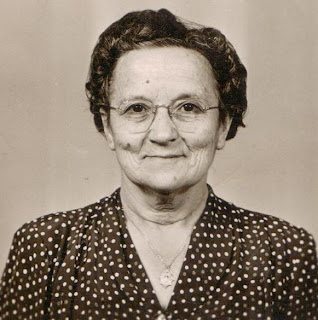 Every year, at both Christmas and Easter, I make ravioli and frankly, the Petracco tradition of ravioli are more sacred to me than the actual holidays. In sum, I cannot imagine Easter without them. Gram (pictured here as a middle-aged woman) lived to be 93. Might have been 94 or 95 -- we were never clear on her exact year of birth and I was 20 when she died. I grew up in a little house across the street from her little house and spent countless childhood and adolescent hours with her. I'm luckier than most people. The years I had with Gram I consider to be one of the great gifts of my life.

Gram and I did a lot of cooking together, but as to the actual ravioli, I grew up making those with my grandmother, Vera because by the time I came along, Gram was tired of the prep work and just let her daughter Vera do the rav making for our wing of the clan.


I learned every step along the line, bit by bit. When I was really young, it was my job to turn the dough cranker. Then I was allowed to seal the ravs with the tines of a fork. As I got older and stronger, I would knead the dough. As my knife skills improved, I finely chopped the parsley for the filling, then I was allowed to make the dough. You get the picture -- I had to master each step before I was allowed to move on to the next step.

I believe it is my duty and privilege to carry on the family food traditions, so I've spent this morning prepping for Easter dinner. Me being me, I like something new to do in the kitchen, a bit of variety. In addition to Gram's cheese ravioli, I make something else. At Christmas, I made mushroom filling as the 'second rav,' and this Easter, I'm revisiting what is basically Lidia Bastianich's pear and marscapone filled ravs. These are served with a bit of butter, rather than a tomato sauce. It's almost a dessert pasta -- so do restrain yourself from eating all of the filling before you get to filling the dough. Just. Put. Down. The. Pears. (And really, it is quite hard to do.)

You will need:
2 ripe bartlett pears
3 to 4 tablespoons of marscapone cheese
2 to 3 palmfuls of freshly grated parmesan cheese
several tablespoons of butter

The prep:
Peel the pears and grate with a hand grater. Grate a block of parm.

In a bowl, mix up the pear, parm and marscapone. Give it a taste. You should really taste all three ingredients. -- you want a balance with no one note over-riding. The pears I had were particularly juicy, so my filling was a bit on the thin side. Several hours in the fridge helped to tighten that up. My advice? Do make the mixture in advance, so that you can refrigerate if needed.

Otherwise, it's that simple. Assemble the ravs using the instructions above. Cook in well salted water at a rolling boil (again, check the christmas recipe for specifics.)

To serve:
In a sautee pan, melt the butter with about 1/2 cup of the pasta water. Toss the cooked ravs in the sautee pan with the butter and a couple of cracks of black pepper for just a minute or two. Serve with pecorino romano cheese.
Posted by JODY DIPERNA at 9:05 AM