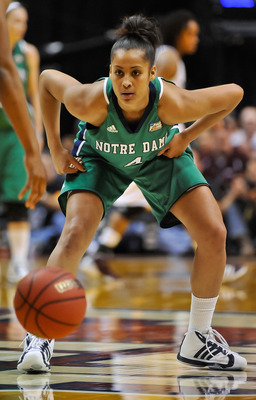 It's become an annual event around here -- my listing my top players in the tourney. It should be noted that these aren't necessarily the best players in the tournament, but the players I'm watching, for a variety of reasons. In some cases, it's because I've seen them numerous times and I never tire of watching them. With a few others, it's because I've spent the season reading about them without getting a chance to see them. To think, when I started watching women's hoops, I probably couldn't have made a list of 10 players I wanted to watch; now, I find myself working hard to cut the list down to just 10. I could easily go to 15.

1. Skylar Diggins, Notre Dame. What could I write about this junior guard for Notre Dame that I haven't already written? From the moment she arrived in South Bend, she was a leader on the team. She has handled everything the media can throw at her with aplomb. She led her team to the Finals last year by upending the behemoth UConn in the Final Four on the way. She has hit buzzer beaters, made impossible dishes, created steals and willed her team to victory. Oh, and she even turned L'il Wayne into a fan. So whatever it is? She's got it. The kid can play in any kind of game. I think because of her looks (she is undeniably beautiful), her toughness is sometimes underestimated, but few in the game are as tough and as scrappy as is Diggins when her team is in a dogfight.

Notre Dame faces Liberty in the 1st round on Sunday at 2:30 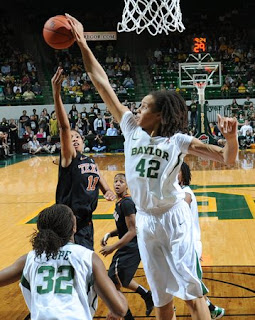 2. Brittney Griner, Baylor. All those things that Diggins has -- Hollywood good looks, freakish charisma, grace in front of a bank of cameras and microphones? Yeah, Griner doesn't have that. But then, how many people do? And how many people are that composed in the spotlight at the age of 20 or 21?

What Griner does have is game. Flat out, right now, Griner is the best player in women's hoops. As a freshman, she was one of the most talented players I'd seen in a long time, but she was also a hot-head, easily goaded into a stupid foul or even throwing a punch. She sometimes acted the part of the bully on the court and that made it kind of hard to root for her to succeed. Clearly, she needed to do some growing, and I don't mean physically.

I honestly think that she didn't really like wearing the black hat, being the bad guy, so I'm glad to see she's grown into herself and her game. She now plays with controlled emotion. And she just owns the court. She swats down balls. She makes it neigh on impossible to get into the paint. She forces teams to play the game from the perimeter and even then, she alters their shot selection. You want to see the best player in the game? Tune in to Baylor. It's just that simple. [As a bonus, you get to watch coach Kim Mulkey, who is perhaps the most entertaining and endearing in the game.]

Baylor takes on the University of California Santa Barbara in the 1st round on Sunday at 2:30

3. Nnemkadi Ogwumike, Stanford. She leads the No. 2 ranked Cardinal in just about every category:  points per game (21.8), three-point shooting efficiency (.429), and defensive rebounds (212). Only her sister, Chiney, has more offensive rebounds and a higher shooting percentage. Ogwumike is not the biggest player on the court, nor the fastest, nor the most intimidating. And yet, at some point in just about every Stanford game I watch, I realize that she has simply Taken. Over. The. Game. Stanford has finished the last four seasons ranked no lower than 2 in the nation. Those four years just happened to coincide with Nnemkadi Ogwumike's career. Just sayin'.

The Stanford Cardinal takes on Hampton in the 1st round on Saturday at 1:30 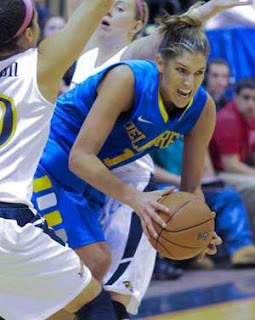 4. Elena Della Donne, Delaware. No list would be complete without Elena Della Donne. She leads the entire nation with 27.5 average points per game and her play is the reason the Delaware Blue Hens, of the wee Colonial Conference, got a three-seed in this year's tourney. But that's not the only reason I'm excited to see Della Donne play. If you don't know her backstory, here's a quick primer:

In 2008, she was the most sought-after recruit in the game and she went, not surprisingly, to UConn. But after just a short time in Ct., she decided it wasn't for her, returned closer to home and went to the University of Delaware. She put down her basketball and played on the volleyball team. Yeah, you read that correctly -- she simply walked away from basketball. There were whispers about her mental toughness; the nicer commenters said that she was simply burned out on basketball. Eventually, Della Donne was drawn back into the basketball gymnasium. And thank god for that. Who knows if there is enough talent around her for the Blue Hens to make a serious run in the tournament? For a much more in depth piece on the amazing Della Donne story, read Sports Illustrated's January feature story here.

Delaware faces the University of Arkansas Little Rock in the first round at 5:20 on Sunday.

5.  Shenise Johnson, Miami. Johnson is one of only three women in NCAA D-1 history to have compiled:   over 2,000 points, more than 1,000 rebounds and  more than 500 assists in her career (along with Nicole Powell and Nancy Lieberman. It should also be noted, that Johnson is just four steals shy of hitting 400 steals. I think. Why is there not a good compendium of these statistics on the inter-webs? Try googling 'career scoring statistics women's ncaa basketball? You get bupkus.)

Johnson hasn't gotten much press because Miami hasn't been a power school of late. It doesn't have the profile of Stanford or the tradition of Tennessee or the records of UConn or a phenom as Baylor does. What happens to players in programs that aren't UConn and Tennessee is that nobody hears about their amazing accomplishments. But in this, her final year, the Hurricanes finally caught up to Johnson and they finished the ACC season just one loss behind the mighty Dookies. It's been a helluva swan song.

Miami takes on the Idaho State Bengals in the first round on Saturday at 6:30. 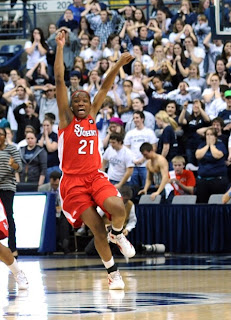 6. Shenneika Smith, St. John's. This kid beat UConn at Connecticut. On a last second 3-point shot. I should again point out that -- this was IN Storrs on a night when UConn was going for their 100th straight home win. Think about that -- they had won 99 straight games on their home court. The last time Geno Auriemma's team had lost at home was March 6, 2007 and here are some fun facts that time:

According to Billboard, "This Is Why I'm Hot" by Mims was No. 1 on the charts that day.

Nobody outside of Canadia had ever heard of Justin Bieber.

And Charlie Sheen was sober (I think.)

That's how long ago it was that the Huskies lost at home. But with just eight seconds left and down by two points, Nadirah McKenith (who was this close to making this list) dished out to Smith. The kid stepped back and drained the three as calmly as though she were playing in the driveway or playground. As Bill Raftery would say, Onions!

The Johnnys take on Creighton in the first round at 5:05 on Sunday.

7. Tyra White, Texas A&M. From one closer to another. And that's just how I think of White -- she finishes games for Gary Blair's 2010-11 National Champions. With Danielle Adams and Sydney Colson graduated, White doesn't have as much talent around her, but if the Aggies can keep her within striking distance, White can still close out a game. She'll dribble drive and she'll pull back and hit a three. Her game is so tough and so physical, she belongs in the Big East. And that's the nicest thing I can say.

In the first round, Texas A&M faces Albany on Saturday evening at 6:30. 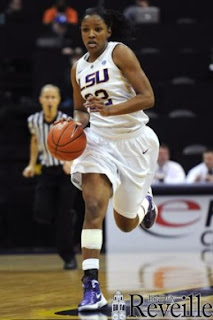 8. Courtney Jones, LSU. If Jones were a football player, she'd be a shut-down corner. If she played baseball, she'd be a gold-glove short-stop. If she played hockey, she might be Martin Broudeur. The LSU Tigers give up just 47.5 points per game and senior Courtney Jones is a large part of the reason why. She's also the main reason that unranked LSU dispatched #11 Kentucky in the SEC tourney and before losing to #7 Tennessee.

The really interesting thing about Jones is, the better she plays on the defensive end, the better her shooting gets at the offensive end. It's all about the yin and the yang. I've seen hockey players get in this kind of zone -- wingers who backcheck hard and then suddenly pucks start going in the net. Jones is the same way. Under new head coach Nikki Caldwell, Jones committed to playing defense, which made her already tremendous offensive game all the better.

LSU plays San Diego State in the first round at 7:30 on Sunday night.

9. Odyssey Sims, Baylor. Like Griner before her, Sims arrived in Waco a bit of a hot-head. And like Griner, she has blossomed under coach Kim Mulkey's approach. I suspect that the best motivators in the women's game remain The Great Pat Summitt (tm) and Uncle Geno, but in terms of being a mentor to a kid who is, I don't want to say troubled, but is a ticking time-bomb, nobody is better than Mulkey. Nobody. Teammate Brittney Griner gets most of the press, but watch Sims on the court. The kid is legit. 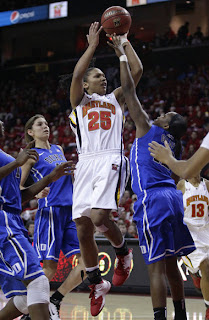 10.  Alyssa Thomas, Maryland. Perhaps I should just cut and paste Thomas' stat line from the Terps site:  100 assists, 54 steals, 14 blocks, 250 rebounds, and 540 points. Um, okay. Reports from around the team are that Thomas is crazy competitive. What I like about her is that she seems to save her best for last. If you're watching a Maryland game and they need a big play in the crunch, grab the person next to you and goad them into betting on every other player making the big play. Then you put your money down on this sophomore forward.

Go to the video, Shirley! Here is Thomas blocking a last second shot against arch-rival Duke to preserve a 63-61 win. The block comes at about 1:20 of the video, but watch Thomas change directions from the wrong side of the key and somehow get out on the edge to make the block. Beautiful.

Maryland plays Navy in the first round at 11:15 a.m. on Saturday.

Seriously, how did I make a list without G'Town's electric Sugar Rodgers? Without Tiffany Hayes of the Beast of the East and Tennessee's Glory Johnson? Without Brittany Rayburn of Purdue or Sasha Goodlett from Georgia Tech? What about St. Bonaventure's Megan Van Tatenhove? Or Penn State's Maggie Lucas?

Like I said, the game, the sport, just keeps getting better and better. I'm gonna need a second TV.
Posted by JODY DIPERNA at 7:05 PM