Skylar Diggins Will Save the World 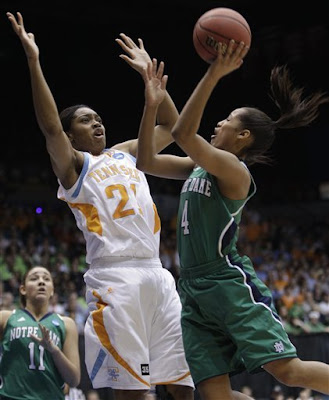 Just one tweet, that's all it took. If Shakespeare were alive, he himself might tweet in response, "Oh brave new world that has such social media in it."

The tweet that sent Skylar Diggins from a great basketball player with a twitter account to a social media supernova came the day before the women's NCAA championship game when Li'l Wayne tweeted to Diggins,

Her twitter account blew up. As of this posting, she now has 68,640 followers and is nothing short of a cultural phenomenon, likely to break into Justin Bieber or Jersey Shore territory for recognizability. Only, unlike Bieber and Snookie, Skylar Diggins might actually have something to say worth paying attention to.

Based on her performance throughout the NCAA tournament, including Notre Dame's losing effort in the final game last night (76-70 to Texas A&M), she is ready to assume the mantle of the best player in the game.

Through six games in the tournament, she averaged nearly 20 points per game and she's on the floor constantly, rarely sitting down for more than a minute. When her team needs her to score, she drops 28, as she did against UConn. When they need her to distribute the ball, she has 12 assists, as she did against Tennessee. And while her stats are impressive, she's more than that. She's explosive, compelling, a charismatic person, but also a charismatic player.

Though a point guard, she's not content to just sit outside the stripe and try to hit three-pointers. She is both fast and quick, will put the ball on the floor, dribble-drive to the bucket, and lay in a beauty of an underhanded shot. Or she'll pull up and hit three. Or, she'll make a great pass to somebody in the paint. She can do it all, and because she can do it all, you don't know what Diggins is going to do next.

She also has model good looks -- accept it, Diggins is a stunner. But unlike other female athletes who were long on looks and short on game, Diggins can flat out play.

And you know what? If people tune in to see Notre Dame women's basketball because Li'l Wayne tweets to Diggins and calls her wifey, or if they tune in because they think she's hot, they have just tuned into a women's basketball game wherein they will see a great basketball player.

And what's wrong with that?

Skylar Diggins will save the world.
Posted by JODY DIPERNA at 11:20 AM