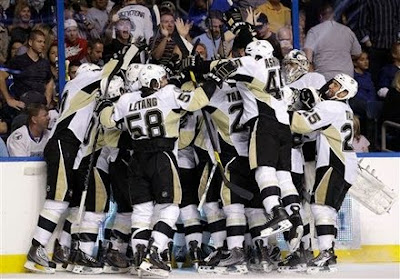 One of my best friends dubbed James Neal "useless" about 10 games into his career with the Penguins. As in James Useless Neal. I, too, was disappointed in the guy. At first he seemed weak, easily taken off his line and he checked with utter indifference. Plus, he didn't score. In fact, he seemed to get flustered around the net, to hesitate a moment too long before shooting, to just not have the quick hands and killer instinct you want from a goal scorer.

Over time, he developed the other parts of his game -- he uses his size to his advantage, finishes his checks, and establishes position. In short, he has become a great overall player and through the first four games of the post-season, he has been the most physical presence on the ice not named Brooks Orpik.

But fans, myself included, want Neal to score. And I'm fairly certain that Ray Shero traded Alex Goligoski to the Stars to get Neal (and Matt Niskanen), because Neal is a scoring winger. Heck, the Penguins -- in the absence of Sid and Geno -- have a ton of guys who are great role players, but not pure scorers. I believe Neal has been pressing around the net, gripping his stick with a vulcan death grip and his desire to score has been counter-productive. The other parts of his game are nice, but we want goals -- big, fat, juicy, game winning goals. And he knows that.

Last night's wrister from the boards that whizzed past an unsuspecting Dwayne Roloson might be just the medicine Neal needs to go on a tear. I actually believe that the dam has burst and we'll see more production from him in terms of points. He is a man who looks like the weight of the world has just been lifted from his shoulders. That's got to be good for his game. 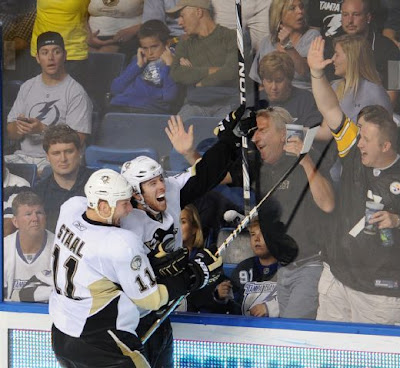 Other random thoughts about this playoff series:

At this time of year, in fact at all times of the year, the outcome of games seems to come down to Marc-Andre Fleury. The team feeds off Fleury, particularly without Sid out there leading the way. When Flower gets off to a good start, makes a great save early, they all feed off of it and get stronger as a result. When he has a shaky start (like Friday night), instead of rising up to give their goalie a lift, they all falter. You can pretty much tell how a game is going to go within the first five minutes of the first period, just by watching Flower. Here's hoping he's a brick wall in net at noon on Saturday, so the Pens can put these guys away and move on.


Dear Tampa Bay,
Get as loud as you want. We love it.
Sincerely,
Max Talbot
Max is a big time player. The Penguins, I would point out, are 11-1 in the post-season when Max has a goal. The guy has the Midas touch.


Has anybody had a bigger series than Arron Asham? Like Talbot, he has a freaky ability to raise his game in the post-season. I think this is precisely why Shero brought him on board. He has three huge goals in this series and constantly goes to net with authority.


Oh wait, I thought of somebody who has had a bigger series than Asham -- Martin St. Louis. He has six points in four games and has single-handedly kept the Lightning in games. Every time I see #26 on the ice for Tampa, my blood pressure spikes. Even though everybody in the building knows that St. Louis is the Bolts best chance to win, he still gets loose around the net. He's got amazing speed, tremendous hands and is maybe the most elusive player in the NHL. If that guy wasn't playing in Tampa, if he played for a Canadian team or in a city like Pittsburgh or Detroit, he'd be a rock star, mentioned in the same breath with Sid and Ovie, Pavel Datsyuk and Daniel Sedin.


At some point today, I will write several love sonnets to Zbynek Michalek. What rhymes with 'cleaner?' Does anybody remember the rules of iambic pentameter?


Steven Stamkos' stat line for this series -- 4 games, 5 shots on goal, 0 goals, 1 assist, and a minus-1 rating. Last night, he didn't even get a single shot on Fleury, that's how much the Pens defense has taken him out of this series. Welcome to the post-season, kid.


Was it just me or did those little drums they passed out to the fans in Tampa Bay on Monday night sound like vuvuzelas? Man, that is a sound I so did not miss. Perhaps there were rogue FIFA vuvuzelas in the house? In addition to the silly drums, that is.
Posted by JODY DIPERNA at 5:35 AM