It would be nice to believe that grit and effort will get you through to the promised land with a bunch of has-beens, never-weres, and never-shoulda-beens because they just want it more than the other guys. What a wonderful world it would be if you could simply 'Braveheart' your way into the MLB playoffs. 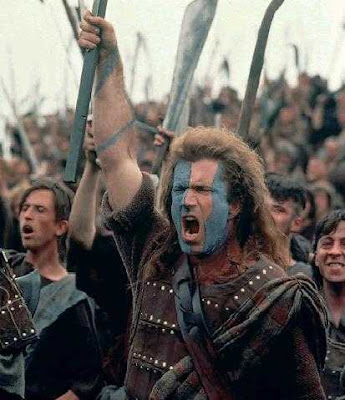 It would be grand if it were actually possible to just "win the whole fucking thing," as Tom Berenger says in 'Major League,' out of spite and sheer bull-headedness. But those are movies and it's a fantasy to believe that you can win a World Series (or even your division), just because you want it more. Sure, you need desire, will and resilience. You need guys who believe and who put in the effort necessary to win.

But you also need starting pitching, relief pitching and a shut-down closer. You need speed on the basepaths and power in the batters box. You need a bunch of guys who can actually, you know, hit a curveball.

And you need a skipper to pull it all together.

The Pirates have the last element, I believe. I believe Hurdle is a good manager. I believe he might even be a great one. At the very least, he's interesting, awake, seems to give a shit, is willing to take some chances and, also, is a guy who stressed fundamentals in spring training. These are all good things. Hurdle is a monumental improvement over John Russell. Hurdle is both engaged and engaging; Russell was comatose. On his best days.

But, really, without a significant improvement in on-field talent, how many wins can a manager account for? I'm saying seven, maybe 10 at the outside. If you put Hurdle in the Pirates dugout last year, that roster might could have won 64 games (maybe 67) rather than 57. They were a bad team. That fact was exacerbated by the presence of a bad manager.

But, aside from the coaching improvement how much different, how much better are these guys? Let's look at the bats first, then the arms.

Of course, even the inert Russell had the sense to sit Iwamura (and his knee-brace, and his .182 batting average. Face of futility = Iwamura) after a while and bring up guys like Alvarez and Tabata. But even with those mid-season moves, the Pirates ranked 29th in runs, 29th in batting average, 28th in on-base percentage, and 27th in slugging percentage. 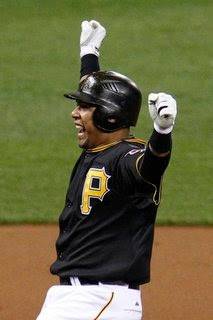 This year's line up should rank much higher in all categories. But even though they are better, are they that much better? Today, they are 29th in run, 25th in batting average, 26th in slugging percentage, and 24th in on-base percentage (that increase might be due solely to the great play of Tabata in the lead-off spot.) Hurdle thought they'd be better than those stats. Heck, we all did. Not that we expected the 1933 Pittsburgh Crawfords mind you, but we did expect to see more lively bats and more runs. The bats may yet turn a corner, crack into the middle percentages for runs scored and on-base percentages. Let's hope so.

Even if the bats wake up, even if Alvarez can actually hit a breaking ball once in a lunar cycle, will it make that much of a difference in terms of record? Unless Clint Hurdle can go out and pitch, how many more wins can we expect him to generate?

Kevin Correia, with his career 4.52 era is expected to anchor the Bucco rotation. Well, he's an improvement over having Zach Duke as your staff 'ace,' and, except for his last outing against the Brewers, he's looked pretty good, which is to say, he'd be a great acquisition if he were your #3 or #4 pitcher. That would be fantastic. That he is the staff ace, tells you something about the rest of the rotation.

The best thing that may have happened to the Pirates is an injury to Ross Ohlendorf. Journos who were at spring training report that Karstens looked better than Ohlendorf anyway, so Ohlendorf v. Karstens in the line-up? What's the difference? It's just an arm to put out there every five days and probably not an arm that should be in an MLB uniform, other than as a long-reliever anyway.

The interesting guys are the four and five pitchers: Charlie Morton and James McDonald. Folks seem to be excited about the potential of both of these guys. And even though I haven't quite seen what those folks are seeing, I'm going to reserve judgment on both of Morton and McDonald until I see more from them.

So, to break down the starting pitching: we have two guys we know are pretty bad but show just enough that the team doesn't quite want to give up on them (Maholm and Ohlendorf); one guy we know is pretty good -- not great, but good (Correia); two guys who are question marks (McDonald and Morton); and one guy who is a long-reliever dressed up as a starter (Karstens).

I think Hurdle will get everything he can from these guys. I love the way his staff handles base-running. I love the aggressive attitude. But when you have to rely on guys like Maholm and Meek, Crotta and Karstens (I assume he'll pitch in Ohlendorf's absence?), the team would have to score upwards of eight runs every night.

On opening day, I predicted 64 wins, which would be a seven game improvement over last year's finish. Even though they've hit a pretty rough patch in the past week, I'm going to upgrade that to 66 wins, just based on my opinion of Hurdle and what I've seen from Tabata as a lead off man. Is that enough improvement for Pittsburgh fans? What kind of record would satisfy you?
Posted by JODY DIPERNA at 6:15 AM