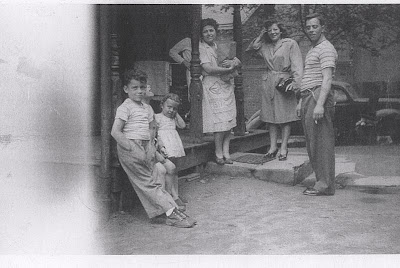 Last week, I posted my great-grandmother's abruzzo ravioli recipe. The other thing that we make at Christmas are tricini. Or that's how Gram said it -- 'tri-cheen' -- phoenetically, dropping the end off, as was her habit. So I figured it was spelled 'tricini' or something close thereto. Then my cousin Peter traced Gram's footsteps back, back, back, across the ocean and found her village, the house she grew up in, and some distant relatives. He asked them about tricini, which they said is spelled, as above -- t'rc'nj. [No vowels. Huh, you'd think they were a Polish Christmas tradition, instead of an Italian one with that spelling.]

My mother recalls Gram making them for both Easter and Christmas, but by the time I entered the picture, Gram made t'rc'nj only at Christmas, to be specific Christmas Eve morning, and by morning, I mean at the ass-crack of dawn. She would start frying the dough around 6:00 a.m. or something equally ridiculous, which meant that she had to make the dough around 3:00 a.m., so that it had time to raise, and be punched down, and raise again. As with the Christmas ravioli, I was the designated family sous chef for the t'rc'nj, too, which meant dragging myself out of bed at around 5:30 to help Gram fry. Then everybody would show up, some with milk, some with wine, some with coffee, and eat these little fried donuts of heaven fresh out of the oil.

I had never heard of any other Italian families making t'rc'nj or any other kind of sweet bread around the holidays until a few months ago, I read Jane Ziegelman's wonderful book, 97 Orchard Street, which traces four families through one tenement in New York's Lower East Side. The last family were Sicilians who made a very similar dish called sfinge -- likewise a sweet fried bread which is traditionally made on New Year's Eve, so that the first taste of the new year is sweet. I'm sure all of these traditions dovetailed, overlapped, morphed into and bounced off one other and are inter-connected.

As to my family's particular tradition, the dough is a sweet, egg bread dough with raisins, which are fried stove top and sprinkled with sugar. The shape is not like a donut, but rather you simply pull the dough by hand and, as you lay it in the frying pan, you shape it like a horseshoe (or, as Gram said, "make like a shoe-horse." I'm not kidding. My cousin Pete and I say that to each other every year.) This year, due to everybody's schedules, I'm making the t'rc'nj on December 26th. And we are going to start frying at 8:30, which means that while I still have to get up at the ass-crack of dawn to make the dough, nobody else does. Tradition. It's so tiring.

You can make them at any time of day, though, and for any occasion, although I must warn, they are best when super fresh.

You will need:
5 pounds of all purpose flour (plus a couple extra cups of flour)
1 teaspoon salt
1 large cake of yeast in 1 cup warm water
2 cups of sugar (plus the remainder of a 5 pound bag for sprinkling post-frying)
1 box or less of raisins
4 eggs, beaten

The Prep:
Soak the raisins overnight in several cups of water. In the morning, when you drain the raisins, save the raisin liquid and put it aside. Mash up the raisins a bit with a potato masher. You just want to give them a cursory smash -- you don't need mashed raisins, just kinda smooshed.

Dissolve the yeast cake in a small bowl in warm water, then mix together the dry ingredients - flour, salt, sugar. Add the yeast, raisins, eggs and 4 cups of water. Use the raisin water, if you don't have 4 full cups of raisin water, supplement it with regular old tap water. Mix it all up by hand until it's thoroughly mixed and give it a little kneading. You'll probably need to add a couple cups of flour at this point - you want a nice sticky bread dough, but not epically sticky.

Cover (I use a big towel) and put it aside to let it raise, about two hours. Note, the raising works better if it's somewhere warm, so don't sit the bowl of dough in an area with a draft.

Now this part is important -- go back to bed.

The dough should raise up in 90 minutes to 2 hours. Get your butt out of bed, punch the dough down, and cover it so it can raise again.

Go back to bed for another 45 minutes or so.

After this second raising, the dough is ready. I need constant access to the dough when I'm frying, and the bowl is big, so I put a chair next to me at the stove.

Heat up vegetable oil in two deep frying pans. My great grandmother didn't have any fancy cooking tools, so she always tested the oil with a raisin. When you think the oil is hot, drop a raisin in -- if it starts to bubble and crackle right away, the oil is hot enough. You don't want the t'rc'nj just lounging about in the oil because, really, yech.

Take a small handful of dough and stretch it so that it's about 3 or 4 inches in length, and about the same circumference as a hot dog. Any stray raisins that are poking out, push back in with your fingertip. Drop in the hot oil and don't forget to make like a shoe-horse. Don't mess with them. I use tongs to flip them. When one side is golden brown, flip. Let the other side get golden brown and remove to a paper towel lined plate or bowl and let them drain for a minute or two. Then toss with regular old granulated sugar.

Enjoy! And then take a much deserved nap.

[Pictured above, standing on the stoop in the center is my grandmother, Vera (Petracco) DiPerna, as a young woman. My mother is off to the side with her hair in pincurls and next to her, in the foreground is her cousin Bobby Alcantara (which I suppose that makes him my first cousin, once removed?) That's the front yard of the house they lived in, also on Orchard Street, but in Brackenridge, Pennsylvania, not Jane Ziegelman's Orchard Street in NYC.]
Posted by JODY DIPERNA at 12:11 PM