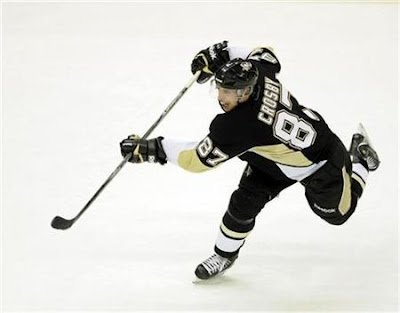 Sid netted his 28th goal of the season last night, streaking down the left wing, effortlessly picking up a feed from linemate Chris Kunitz and let a slap shot fly that blew right through Panthers' netminder, Tomas Vokoun.

When Sid first arrived, he was an assist man. Despite his speed and hands, he seemed to use his talents to feed the puck to other players. Then he added scoring to his bag of tricks, winning the Rocket Richard trophy last year (with Tampa's Steven Stamkos). But most of those goals came from close in on the net. He's got sneaky quick hands and can flip the puck into tight spaces near the goal mouth. This year, we're seeing him take, and make, more outside shots.

I hope catching up to Mats Sundin (Quebec Nordiques) 30 consecutive games point streak (1992-93) is next on the list.
Posted by JODY DIPERNA at 5:52 AM