Of Leviathans and Cinderellas, the Women's Final Tips Tonight 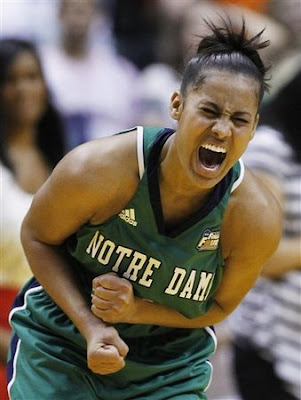 For the last several years, I've heard it said that the problem with women's basketball is the hegemony of UConn (and Tennessee and Stanford, to a lesser degree.) Suddenly, yesterday, after Texas A&M knocked off Stanford and Notre Dame took down mighty UConn (you know what they say -- fourth time's a charm), I heard it said that nobody will watch tonight's final because, wait for it -- UConn and Stanford aren't playing.

Huh? Too much UConn? Too little UConn? I'm confused. So now David felling Goliath is a bad thing? Are dynasties good? Or bad? Are we supposed to want a visit from Cinderella or not, for crying out loud?!

We need UConn (and Tennessee and Stanford) because Cinderella is just another obscure, unknown housewench without the evil step-mother. And make no mistake, the Huskies and the Vols and the Cardinal are the evil stepmothers in this tale. We need them because underdogs don't exist in a vacuum. They require opposition, are reliant on tyranny (or at least overwhelming odds.)

David disappears into the vapor without Goliath.

But it's also no fun if Goliath always wins. Who wants to tune in if David never ever notches a victory? We watch because of the possibility of Cinderella dancing with Prince Charming. So we need UConn (and Tennessee and Stanford). And we also need them to get knocked down every now and again because what compels us, what grabs our attention is the push-pull, the tug of war between big and little, the battle of expected against unexpected, the dynastic and the scrappy.

Without the diametrical opposition of the underdog versus leviathan paradigm laying over it, the 1985 Villanova men's team is just another champion. Which is my high-falutin' way of saying, had 'Nova beaten any team other than Georgetown, nobody remembers that game. But given what Georgetown was, Villanova's victory is considered one of the greatest upsets in men's tournament history. Everybody remembers it, everybody refers to it; heck, 25 years have passed and that game is as relevant, as present, as though it happened yesterday.

So what does this women's final mean, given that the titans have already been toppled, knocked from their exalted perches on high?

It means that this is a Final Four we'll be talking about for a long time to come because it's a harbinger of the development of the game.

It means that depth of field is developing over time. These things don't happen overnight. What we are watching, and I find it fascinating to have a front row seat for this, is a sport mid-stride in a massive growth spurt. For now, the underdogs are teams from power conferences (the Big East and Big 12 are the two best in the women's game, by far), but we're on the road to seeing a team from a lesser conference or a mid-major break through.

It means that there is no substitute for good basketball, which is what all four teams gave us Sunday night. That the outcomes of both Final Four match-ups turned out differently than most anticipated is of little consequence. Those were great games and both Notre Dame and Texas A&M made their way to this stage the hard way.

And isn't that a good thing for any sport?
Posted by JODY DIPERNA at 5:48 AM