My Aunt Fulmay was actually my great aunt -- my grandmother's (older?) sister. Though her given name was Philomena (after St. Philomena) everybody in the family called her Fulmay. [Her friends from beauty school called her Philly, a great nickname for Philomena.] Growing up in Western Pa., the name Fulmay never seemed odd to me, but when I got to college, none of my college friends could pronounce Fulmay (I have no idea why), but they always said Phoo-May, as though she were of Asian descent, rather than Italian.

In a family full of great home-style cooks, all of them with big personalities, my Aunt Fulmay had one of the bigger personalities. I was modified-vegetarian through most of my 20's (I ate fish and dairy, but nothing that walked the earth.) Aunt Fulmay told me to come up for a roasted chicken and when I told her I was vegetarian, she screeched, "But honey! What do you eat?!"

Then, she offered to make pork instead. True story.

If you aren't Italian and if you didn't grow up in Pittsburgh, you may not even know what Italian Wedding Soup is. It's a sad state of affairs, I know. For the uninitiated, wedding soup is chicken broth, with baby meatballs, greens (usually escarole or spinach) and tiny pasta (generally acini de pepe). But if you you grew up in an Italian family in the Pittsburgh area, you probably had wedding soup at home -- we always had it at Christmas and Easter. I remember that my neighbors, the Polish, German and Slovak ones, didn't eat wedding soup for holidays. Talk about a sad state of affairs.

At some point in the mid-1980's, wedding soup exploded throughout the area and, like the Primanti's sandwich and the pierogi, became one of the hallmark foods of Pittsburgh. [We can only be grateful that they don't race tureens of wedding soup at PNC Park.] Now you can get wedding soup at pretty much any little diner and bar that serves food. It is everywhere. I'm shocked, actually, that Monday Night Football hasn't used wedding soup as their go-to Pittsburgh food image. (If you're not a sports fan, you don't realize that MNF has a gratuitous shot of a local food wherever they are. E.G., in Philly, it's always a cheesesteak; in San Diego, generally they show a fish taco; in Cincy, there is always a lingering shot of Skyline Chili; and in Pittsburgh, it's always, always a Primanti's sandwich. 'They put french fries right. on. the. sandwich!')

Read more »
Posted by JODY DIPERNA at 9:43 AM No comments:

What Went Wrong, Went Wrong Fast: a Eulogy for the 2012 Pittsburgh Pirates 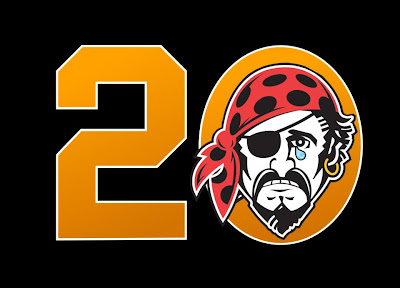 "What went wrong, went wrong fast," John Irving once wrote and with those words, his protagonist in The Hotel New Hampshire revealed the death of his mother and younger brother in a plane crash. As a reader, you know it's going to happen; maybe not a plane crash, but you know that something horrible, something awful, something unspeakable will happen. You know this because Irving is a master of foreshadowing. (Also of pathos, which is probably relevant when discussing the Pirates, too.) Because Irving is just so damned good at it, you know what's coming, but you don't know it, which is to say that you feel something -- your Spidey sense is all tingly and at the same time, the novel is new to you. When it happens, the impact is like a sledgehammer hitting you in the face and yet, a tiny voice in the back of your brain says, "Oh, I knew that was going to happen."

The calamity which is the back end of the 2012 baseball season for the Pittsburgh Pirates season reminds me so much of Irving's crash:  the late season death keel is something we could have predicted -- well, maybe not to the extreme that has played out on the field -- but still we could have seen it coming, or at least parts of it.