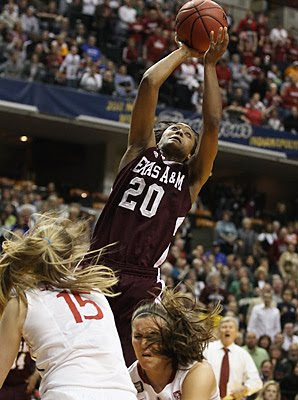 Both these teams are physical, tough and used to beating their opposition by large margins -- Notre Dame and Texas A&M rank six and seven in that stat nationally, respectively. Both are predicated on playing shut-down defense first, so even if their shots aren't dropping, they can keep the game tonight close. Both knocked off two No. 1 seeds to get here (ND took down Tennessee, then UConn; A&M took out Baylor, then Stanford.) Both have shown remarkable resilience.

While it is hard to portray Notre Dame as an underdog, ever, in any sport, I do believe that Jesus, Mary, Joseph and all the saints above are still shaking their heads in disbelief at their victory over UConn Sunday night.

Guard Skylar Diggins, in her second year, arrived in South Bend under a ridiculous amount of hype, which generally predisposes me to raise eyebrow, at the very least, but what she did Sunday night leading her team to victory from a 6-point halftime deficit and under the burden of three previous losses to UConn on their backs, convinced me that she is as good as promised, all that and a shot of Patron.

In the tourney this year, she's played more than 37 minutes per game, averaging 18.6 points, 6 rebounds, and 6.4 assists, plus throw in some steals and blocked shots here and there. In the biggest games of her career (so far), she scored 24 points (v. Tennessee in the Elite Eight) and 28 points (v. UConn.) If you're looking for a superstar, a player who will hold your attention a'la Maya Moore, look no further than Diggins.

And thus endeth the Maya Moore era in women's college hoops. Are we ushering in the Skylar Diggins era? As Shakespeare once said, the king is dead, long live the king!

ND is more than just one player, though. Deveraux Peters is one of my favorite players to watch, because she plays defense like a member of the Pittsburgh Steelers, and guard Natalie Novosel had a hot hand against the Huskies on Sunday night, dropping 22 points. Inside, Becca Bruszewski has battled through injuries throughout the tournament and her gutsy play was a big part of the reason the Irish advanced to the final.

On the other side of the court, I have a soft spot for the Texas A&M Aggies. I fell in love -- hard -- with the Aggies last year. It's hard not to like a coach like Gary Blair, who has one of those great, warm, uniquely southern senses of humor and a drawl that makes me want to just pour myself a big ole glass of iced tea and listen to him talk. I feel like he stepped right off the pages of a Harper Lee or Carson McCullers novel.

First team All-American, senior forward/center Danielle Adams has been the face of this team for a couple of years now and I'm expecting a great heavy-weight slobber-knocker bout between Adams and Bruszewski in the paint all night long, but as gutsy as Adams' play was on Sunday, some of her teammates emerged from her shadow in this tourney as stars in their own rights.

Both Sydneys came up big down the stretch, as did Tyra White as A&M came back from a 10-point deficit in the last six minutes. Sydney Carter hit three of her four 3-point shots in the second half, draining one of the biggest buckets of the night with about 90 seconds left to pull A&M within one-point.

Then, after Nnemkadi Ogwumike put Stanford up with nine seconds on the clock, Sydney Colson drove the length of the floor, with no time outs, and passed the ball to White with authority under the rim. If you didn't see the winning bucket, watch the ESPN video of Colson's drive and pass. White had an awesome game, too, providing much of the offense as A&M clawed their way back.

Can Colson equal Diggins as a field general?

Can Bruszewski withstand the physical assault of Adams?

Tip off in about five hours. Long ice baths needed for both squads three hours after that.
Posted by JODY DIPERNA at 4:48 AM