Penguins and the Flyers: In the Octagon for Round 1 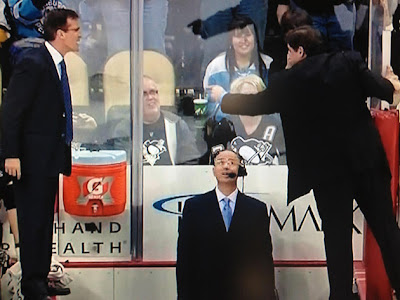 Flyers coach Peter Laviolette passes on a compliment to Dan Bylsma via Penguins assistant coach Tony Granato, with the diminutive Pierre McGuire looking on from below.

When the Penguins and Flyers play, even the coaches pop a gasket.


Some teams try to get under your skin, lure better, more skilled teams  into playing a scrape and grind, emotional game. Most of the teams that resort to that type of hockey don't have very many skilled players and so they have to ham and egg their way to wins. It's not a bad approach if you have nothing but a bunch of muckers in your line-up.

The Flyers have perfected this game -- a style that lives somewhere between agitation and truculence (in the words of Leafs GM Brian Burke) -- but unlike most nuisance teams, the Flyers are tremendously skilled. They average 3.2 goals per game -- 2nd best in the league behind only the Penguins -- and they have a potent power play (ranked 6th in the NHL.) They have sharp-shooters. They have an abundance of guys who can find the back of the net. And they play an exceptionally effective transition game.  This, of course, is precisely why they are so dangerous.

The scheme is to agitate, irritate, provoke, gall, goad and antagonize until somebody finally responds. Just beleaguer the opposition until they lose focus. Four out of six tries, they were able to to just that against the Penguins. The "Broad Street Bullies" is one of the best nicknames in the history of sports because it is both alliterative and dead-on-accurate and this is just what they try to do -- bully you until you make a mistake or two.

The Flyers want to win, they want to score, but I don't think they really enjoy it unless they've gotten under your skin, too. 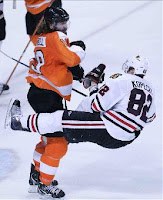 When Wayne Simmonds gives Geno a stick in the ribs and Geno retaliates and gets sent to the box -- that's a win for the Flyers.

When Braydon Coburn runs over the Flower and Brooks Orpik responds and gets sent to the box -- that's a win for the Flyers.

When Hartnell gives the business to Kris Letang, then Letang ends up in the box -- that's a win for the Flyers.

When Brayden Schenn gives Sid a cheap cross-check and Sid ends up in the box -- that's a win for the Flyers.

Did you ever ride in the backseat of the car with a relative to just kept touching you, breathing in your general direction, inching a toe over into your air space and deliberately irritating the shit out of you but never being caught by the adult driving the car?

Those kids all grew up to be the Philadelphia Flyers.

It's a clever plan despite the fact that at least some of the time the Flyers do get busted -- they do lead the league in penalty minutes by a huge margin, after all. 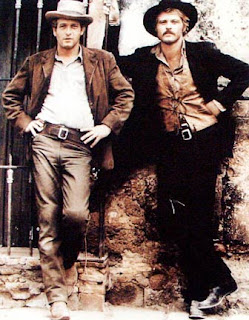 The Flyers are just trying to get a rise out of them and the best way for the Penguins to succeed is to ignore them.

Basically, they need to take a job as payroll guards.

'Butch Cassidy & the Sundance Kid' leave the U.S. of A. and take up their robbin' and theivin' in Bolivia. Everything's swell until they realize dogged lawman Joe Lefors is in Bolivia, on their track.

Sundance:  "And if he misses us, he'll wait for the next job. Let's finish it now, one way or the other."


Butch:  "He's gotta wait for us, right? To pull another job? ... Well, what if there isn't another job? I mean, he can't arrest us and he can't take us outta here. We'll drive him crazy. We'll outlast the bastard. We'll go straight!"

And this, is exactly what Evgeni Malkin and the Kid need to do. Play it straight. Let the refs do their jobs. Stay within themselves and their gameplan. The idea is not to be the guy with the most 'macho points,' but the guy holding the Cup. Nothing with drive the Flyers more insane than Geno and James Neal simply turning away. Nothing will irritate the instigators more than Sidney Crosby back-checking while ignoring them. There's nothing the Flyers hate more than being met with indifference. The Penguins need to turn the other cheek and skate away. Towards Lord Stanley.

And now, to get you in the right frame of mind for this amazing hockey series -- the Hanson Brothers' first shift, from 'Slap Shot.'