How Much Pressure Is on Team USA to Win the Cup? 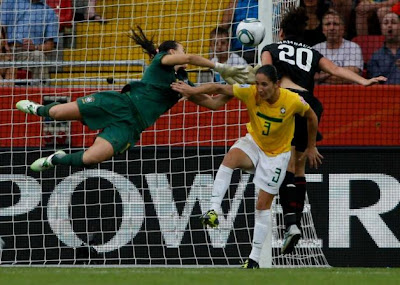 All the pressure in the world.

More pressure than can be measured by existing technology.

More pressure than Freddy Mercury and David Bowie memorialized in song, which they described, if memory serves as, 'under pressure - that burns a building down.'
This group of athletes, to their credit, created this intense pressure by winning through a set of unbelievable circumstances in the quarterfinals. Let me be clear - a women's athletics team got the attention of an entire nation, a nation which remains a male-centric sports culture even in the 21st century. But Abby Wambach, Megan Rapinoe and Hope Solo got our attention. 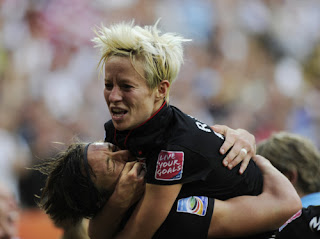 They profited as the German fans turned against first Fifa, then against Marta, then all of team Brazil. And then something else happened. It wasn't just anti-Fifa sentiment. It wasn't just disgust with Erika's shameless flopping. Rapinoe, Wambach and Solo, as well as Ali Krieger and Shannon Boxx, won those fans over. The Dresden fans were cheering for them, not just against Brazil, not merely against referee Jacqui Melksham.

It was a transcendent comeback. With it, they captivated America, too.

I hate to rain on everybody's parade here, but transcendent though this victory may be, it will be an impermanent moment if they do not go on to win the World Cup.

I started to make a list of the most dramatic finishes in sports -- Joe Carter's walk-off home run, the Colts-Giants 1958 NFL Championship game, Kirk Gibson's, "I don't believe what I just saw," home-run, the Immaculate Reception, Lorenzo Charles' unlikely bucket to win the 1983 NCAA championship, the Catch, the Miracle on Ice, etc., etc.

In so doing, I realized that each of the above moments either won a championship (Joe Carter, Lorenzo Charles, Alan Ameche), or happened on the way to a championship (the Catch, Miracle on Ice, Kirk Gibson).

We remember these moments, not in a vacuum, but in context.

The Niners' dynasty was built upon Dwight Clark's catch.

Even the Immaculate Reception, which didn't lead directly to a championship that year, marks the beginning of the Steelers' dynasty. If that team hadn't gone on to win Super Bowls, I don't think Franco Harris' grab and run would have a statue memorializing it at Greater Pitt airport.

The youngins may believe that the 1980 USA Olympic Hockey team defeated the terrifying Red Army team to win the gold medal, but for those of us who watched, we can never forget that game was the semi-final. They then defeated Finland in the Gold Medal game. Without that gold medal victory, nobody remembers Mike Eruzione. Or twitchy Jim Craig. Only die-hard hockey fans would remember Herb Brooks. Without that gold medal, the "Do You Believe in Miracles?!" game drops down on the list of most dramatic sports moments. I'd actually posit that the gold medal alters Al Michaels' career arc, too. 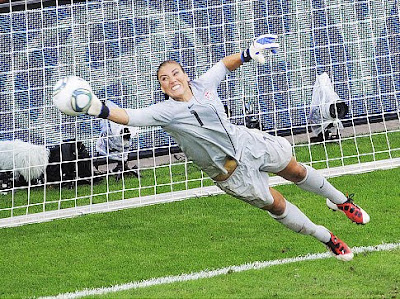 If Team USA loses the semi-final match to Team France today, or, if they go on to lose in the final to either Team Sweden or Team Japan, all of that attention, all of that passion for soccer, and the interest in women's soccer in particular is gone. Wiped clean. Without two more victories, all that buzz is vaporized, lost to the mist.

I have a friend who says that soccer is the sport of the future. And it always will be. For most of my life, soccer apologists have told me that the sport is ready to turn a corner in the US of A. That this one particular game will do it. Or that tournament will be the tipping point. Or this player will drag it onto the front pages for good. Blah, blah, blah. Personally, I don't really care if it never gets bigger than it is right now. I'm not futbol activist.

But if anybody can start a wee love affair with soccer on American soil, I think it's this team, this women's team. They have such a moment at hand. I hope they're up to it.