Back here at Bucco Central, your Pittsburgh Pirates are all alone in first place in the National League Central, one-half game in front of both the Milwaukee Brewers and the St. Louis Cardinals. 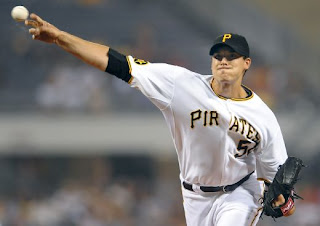 Oh, it's all fun and games here, what with all the scoreboard watching, trade rumors and generally silly joy.

Which brings us to:  are you a glass half-full, or half-empty sort of person? Because the Pirates schedule for the rest of this month is a like a deadly version of Wipeout. You can either view this stretch as a waiting pitfall. I'd understand if you did. Or, you can view it as an opportunity to put a little distance between themselves and the Cards, Reds, and BrewCrew. And see how they stack up against the elite of the NL. I'm gonna go with the latter. I'm going to look at this as a great opportunity for these guys.

First, they finish up a three-game set with the Reds tonight and tomorrow. Then they have the Cards in over the weekend for three tilts. Then they go to Atlanta for a four game set with the Braves, then to Philadelphia for three games against the Phils. Let's put that in terms of record and payroll.

-- two games against the $75 million dollar, 47-49 Reds (a team which won the division last year, it should be pointed out.)

-- then three games at the unfriendly confines in Philadelphia against the $173 million dollar, 59-36 Phillies (Last year's NL East division winner and perennial candidate to win the World Series).

If you want to know if the accomplishments of your $45 million dollar, 50-44 Pirates have all been a mirage, the rest of July should give you a really good idea.

These Pirates have played some really excellent teams and done well this season, most memorably against the Phillies and the Red Sox. Those were the most exciting baseball games we've seen in these parts since Jim Leyland was last fined for smoking cigarettes in the dugout at Three Rivers. But the difference is, I'm not sure we expected much when the Phils came to town. I think most of the talk around here was that if the Pirates could take one game from them, that would be good enough. Same mindset was in place when the Sawks came to the 'burgh. (Admittedly, that was the mindset of the fans, not the players and coaches.) But it will be interesting to see how this group of over-achievers navigates these heavy-weight match-ups now that there are expectations. I may regret saying this later, but bring on the big boys.

[Photo: Christopher Horner for pittsburghlive.com].
Posted by JODY DIPERNA at 8:52 AM