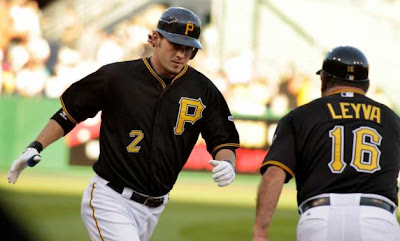 Last night, Wandy Rodriquez brought his 3.25 era and 7-2 record into PNC Park and the Pirates laid 5 runs on him, none bigger than Brandon Wood’s 2-run dinger in the 2nd inning. Your battling Buccos added on more runs, but really, Wood's homer would have done it because Jeff Karstens was,once again, masterful.

As we round the bases into the All-Star break, consider these facts about these Pirates:

-- Wandy Rodriquez has been a huge pain in the private parts for the Pirates. From 2008 up until last night, his career record against the Bucs was 5-1. From the ‘08 season through the ‘10 season, his era against the Buccos was a microscopic 1.85, having given up only 7 earned runs in 5 games. 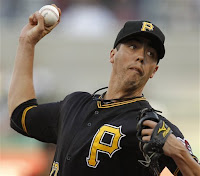 -- In recent memory, conferring an MVP award on any member of the Pittsburgh Pirates seemed a bit like putting Serge Lutens lipstick ($75 per tube) on a honey badger. But this year, there are several strong contenders, and I’d argue that you could give Jeff Karstens an MVP award right now with a strong case to lean on. He was wonderful again last night.

One of the things I love best about Karstens is that he makes teams beat him, which is to say, he doesn’t issue free passes. He’s got just 18 walks all season (and a handful of those are intentional, I think). His era is the 10th lowest in all of MLB. Of the nine pitchers in front of him with lower era’s, only Roy Halladay has issued fewer walks (17.) Kids at home, take this as a lesson: make hitters hit because there's a good chance they'll make an out.


-- I was at Sunday’s game, the opener of this series versus the Astros. Afterward, starter Paul Maholm said it was the kind of game they typically lost in the past. I had the exact same thought walking back to my car that day. After giving up three runs, only two of which were earned runs (really, all three came across the plate as a result of fielding blunders), the Pirates battled back. The Astros put up a flukey run in the 1st inning, but Michael McHenry singled home Lyle Overbay to answer in the 2nd. The Astros put up 2 runs in the 3rd (both on errors), but Chase d’Arnaud, Andrew McCutchen and Overbay answered in the bottom half of the inning. Like I said, the club had zero ability to counter-punch last year. You don’t win many games like that, as they proved.


-- The franchise won a total of 16 series in all of 2010. With the win over the Houston Astros last night, the Pirates have clinched that series (regardless of the outcome tonight), giving them 17 series victories in 2011.


-- Two of those series wins came against the Philadelphia Phillies and the Boston Red Sox, respectively. The Phillies rolled into town in first place in the NL East, sporting a 34-23 record. Then promptly lost two to the Pirates. The Red Sox came to town three weeks later, in first place in the AL East, with their garish 41-31 record. They promptly lost two to the Pirates.

More later.
Posted by JODY DIPERNA at 5:40 AM