What in the World Is Wrong with Pedro? 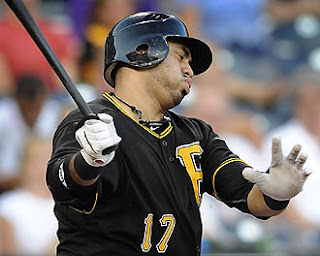 Since the days of Honus Wagner, a third baseman is supposed to be, by design, a serious bopper. It's truism because it generally works -- good baseball teams have a a big stick, or a reliable stick (or both) at third base.

All of which made suffering through the Andy Laroche era an especially painful indignity. Understandably, much rejoicing ensued in places as far flung as Carrick and Millvale, Bloomfield and East Liberty when the big club called Pedro Alvarez up from AAA ball. Word was that Alvarez was the draft pick that the Pirates finally got right -- a can't miss prospect, a prospect so coveted, in fact, that the Pirates drafted him second overall, even knowing they would have to deal with his agent, the noxious Scott Boras, in contract negotiations. Alvarez was so good as to be worth that. They, and we, expected to get some bang for our trouble.


I don't mean to call out Alvarez, given that pretty much every hitter in the Pittsburgh line-up has struggled sporadically through the first month of baseball and nobody in the starting line up has a batting average over .300, [except Chris Snyder and Xavier Paul, but those guys have fewer than 50 at bats per, hardly a significant sampling.] Still, the only guy in the lineup whose struggles seriously concern me is, you got it, Pedro Alvarez.

Every hitter slumps sometimes, beyond which, we all knew that Pedro couldn't hit a curveball when he was still in AAA ball. (We should all be lighting candles and leaving delicious, fruity umbrella drinks for Jobu on Alvarez' behalf.) So his struggles against major league curveballs isn't at all surprising, but what is alarming is his approach at the plate. I don't want to say he's timid, but he's certainly apprehensive up there. He has yet to meet a first pitch he won't watch blow by him.

Last night, in a typical at bat, he struck out looking. Is anything more frustrating than watching a guy strike out while standing there like a statue? In 28 games this year, he's had 99 at bats and in that time, he's struck out 34 times -- good for 1.2 strike outs per game. Or one strike out every third time to the plate. Depending on how you want to slice it.

Worse yet, he's faced an 0-2 count 40 times in those plate appearances. Forty! And every time, every single time of those forty 0-2 counts, he's made an out. Never once has he battled back from that count to somehow hit a grounder up the middle, or work a pitcher for a walk.

It seems to me your third baseman, the guy you drafted to bat clean up, should be a guy who is able to battle through disadvantageous counts. At least some of the time. And, more to the point, that hitter should feel like he's the man in the batter's box. If not aggressive, he should at least be confident. I'm seeing none of that right now. On the other hand, if my batting average were as anemic as Alvarez', I might look less than confident, too.

We all rush to judgment so fast with athletes. Players are declared busts before the All-Star break. That kind of reaction is ridiculous, but his start has been disappointing, has it not? Clint Hurdle has tried everything, and, in an effort to take the pressure off him, has moved Pedro to the seven-hole in the line up. Last week, he even had him attempt a bunt.

Alvarez has a long road in front of him to be a legit major league hitter and the thinking goes that you can teach a guy to hit, if he has power. We know Alvarez has power. When he's feeling confident and when he gets a fastball, he can hit it out of any yard, but still it seems to me that is a lot to teach a guy -- to (a) recognize pitches, (b) adjust to them, and then actually (c) swing at them.

Hurdle has already turned this team from downright unwatchable to moderately entertaining, enough for canonization in my opinion. If he can turn Alvarez around, we'll be re-naming streets for the guy. And frankly, I feel like if anybody can do it, it's Hurdle and hitting coach Gregg Ritchie.

But Pedro's struggles put Hurdle in a tough position. In the long-term, the team needs Alvarez if they want to actually turn the whole thing around. Still, Hurdle has to win and he has to win now. I'm thinking last night's minor injury, assuming it is minor and will just afford him a few days off, might be a good thing for everybody involved.
Posted by JODY DIPERNA at 5:51 AM