Pittsburgh Was Once a Baseball Town -- Can It Be One Again? 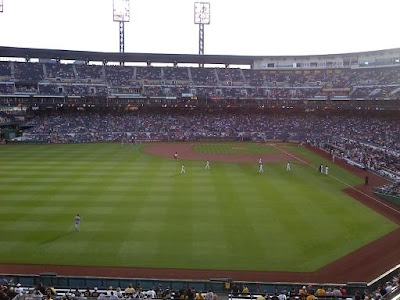 On Saturday night, I went to the Pirates game, a 6-2 win over the Detroit Tigers. Also, notably, it was a sell out, with the last 7,000 or so seats sold in walk-up traffic. Heck, I can't remember the last time I was at a sold out Pirates game. [Oh, wait, I can. It was opening day a couple of years ago, but before that, honestly, it had to be 1992 -- a late September game against the Mucking Fets at Three Rivers. I can actually picture my seats in the old concrete toilet on the third base side.]

The extraordinary drought since that 1992 season makes it easy to forget Pittsburgh's storied baseball history, perhaps the richest history you might find in a market this size, particularly when you factor in the amazing Negro League teams fielded by the Homestead Grays and the Pittsburgh Crawfords. Home to Honus Wagner. Site of the first World Series ever. Pie Traynor. Josh Gibson. And, of course, the great one, Roberto Clemente. It's a veritable murder's row of baseball luminaries.


But as much as baseball thrives on its past, it doesn't actually live in antiquity. After a while, the youngins' tire of hearing stories of the great 'We Are Family' team of my youth. They want heroes of their own, memories of their own. Of heroes and memories that build loyalty, we have lived in shameful want. Because of inept ownership, unwilling to spend money and seemingly unable to spend it wisely when they did open the purse strings, fans turned away out of frustration and boredom in equal parts. We justifiedly turned to other pursuits, other distractions; the Pirates were something to do if it was a give-away night, a fireworks night, or a particularly nice evening and it wasn't too inconvenient, and there wasn't a really good rerun of 'House' on.

As to the team itself? We all knew what to expect from the team -- more fire-sales of talent, inert and ineffectual skippers, more trades for a useless 'player to be named later,' more free-agency idiocy, and more signings of washed up locker room cancers. (Personally, I like my serving of locker room cancer served on a boat named Operation Shutdown.) Even on the rare occasion when things looked remotely optimistic, you could count on ownership to do something stupid.

No wonder this is a football town and a hockey town. The Steelers certainly did their part in worming their way into our hearts. Four Super Bowls in quick order will do that to a fanbase, and they managed to tread water, even during the leanest years in the 1980's. Then along came Mario and this became a rabid hockey town, too. The timing could not have been worse for, at the moment Mario was just starting his second date with Lord Stanley, the Pirates were falling into prosaic monotony.

What both of those teams give the fans consistently is hope. And hope, not bobbleheads or beach-towels, not fireworks or Steve Miller Band appearances, sells tickets.

Putting your faith in the post-1992 Pirates is not for the faint of heart, a bit like watching a slasher flick while nursing a case of food poisoning -- every moment is fraught with trepidation, watched through your fingers as you cover your eyes, and just when you think the worst of the nausea has passed, another wave of bilious queasiness crests. 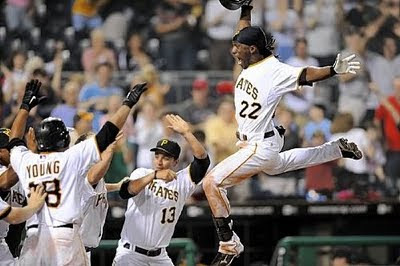 Enter the 2011 Pirates. Right now, May of 2011, I sense a sea change in the mood around Pittsburgh these days. Sure, sure, the battling Buccos are two games under .500, but fans are starting to show just a bit of interest. You can almost smell it -- the faintest traces of hope. Perhaps applied obliquely, or just around the edges, but we are cautiously hopeful. Something just feels different.

The numbers only show part of the story -- their record is just two games better than they were at the same time last year; the team batting average is slightly improved (up to 24th from 29th); and slugging percentage is also moderately improved (up to 24th from 27th). The pitching, however, is much improved with the team ERA up to 15th (at 3.64) from dead last (at 5.00) in 2010. They have 25 quality starts in 46 games. If they continue at that pace, they would finish with upward of 95 quality starts over the season. Last year, they finished with just 71 quality starts all year. Wow.

You can't see it in the numbers, even though quality starts have been like hen's teeth around here, but it's something more than that. Watch a handful of games and something feels different and like pornography, I know it when I see it, sabremetrics be damned. I think a large part of it is the mindset of Clint Hurdle -- a refreshing combination of competence and charisma. His hitting, pitching and position coaches actually seem to, er, coach. So that's a start right there. He's instilled an aggressive mindset in his players. Last year, not one of the Pirates pitchers threw inside with any confidence. This year, they are taking ownership of the inside part of the plate. He has his guys running the basepaths like crazy, testing other teams constantly. Honestly, I saw a game last year, when the Buccos had a guy on 2nd base and he didn't score on a double. How is that even possible? What was he doing on 2nd base? Texting? 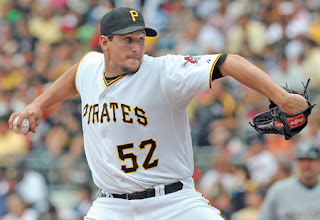 For the sake of argument, let's say that Hurdle is getting everything that you can get from the talent he has, that what we're seeing is the upper limit for this collection of players. And let's say he is consistent enough that the rest of the season plays out like it has so far -- that the Pirates neither improve appreciably, but neither do they decline. With a winning percentage of .478, that would amount to 77 wins for the season and I think the fans can live with that. Actually, I think the fans would be thrilled with that. Heck, if they go into the final series of the season with say, 75 wins, I think the town will rename Fort Duquesne for Hurdle (I like the sound of 'Fort Hurdle'), erect statues of Neil Walker and Andrew McCutchen, and possibly elect Joel Hanrahan to the Mayor's office (actually, he might be an improvement.)

Not that 75 or 77 wins are the long term goals. But compared to what we saw of the Jim Tracy and John Russell eras, that is an epic improvement. More to the point, mightn't this be the season you could possibly point to and say, "that was the turning point." Dare we even hope for that?

In fairness, it must be pointed out that it is usually right around this time when management makes a tragically bone-headed move, but if Saturday night was any indication, I think the fans are ready -- ready to give these guys a chance. Hurdle's doing his job. McCutchen is doing his job. Kevin Correia is doing much more than any of us anticipated. So now? Now is the time that management has to find a way not to screw up a good thing -- the hope of Pirates fans is more fragile than an orchid, more delicate than a Ming vase.

Tread lightly, he who lives in hopes of increased attendance.