I have had this terrible thought for about a month now -- we may not see Sidney Crosby even at the start of the 2011-2012 season.

That Crosby suffered setback from his January concussion(s) mid-way through the playoff series versus the Lightning cannot be a good thing. Head injuries are funny. Not funny ha ha or funny witty, but funny sad ... really, really sad. And also tricky. There's not a straight line of recovery, the way there often is with a knee injury or shoulder injury. Brains are complicated. Months had passed and yet, Sid still had a nasty bout of symptoms. And I wonder ... if three months were not enough for his head to get better, why do we think six months will make it better? Or eight months? There are no guarantees here.


Worse yet, if he is symptom free at the start of next season, there are no guarantees that the next nasty headshot won't set him back to where he was in mid-January. And, if we've learned anything from this hockey playoff season, there will be a nasty headshot. I guarantee that, son.

I've seen way too many guys taking runs, too many elbows thrown at heads, too much blatant boarding, and too much just plain flat-out head-hunting in the playoffs this spring. And I've seen those incidents largely ignored by the braintrust of the NHL, the guys entrusted with protecting the brains of guys like Brent Seabrook and Simon Gagne. With so little punishment being meted out (or no punishment at all), it's open season on hockey player heads this spring.

So, what's the thrust here? If your name is Matt Cooke and you go after somebody's head, you get a 17 game suspension, but if you're not named Matt Cooke, then you just get one game, or no punishment at all for heinous head-hunting? I strongly supported the Cooke suspension when the league handed it down because I believed it marked a sea-change in the way the NHL dealt with head-hunting.

I could not have been more wrong about the NHL's intentions.

There's a simple solution -- ban all shots to the head, regardless of whether they are accidental or not. Without doing that, all of the NHL's talk is just disingenuous hot air.

High stick penalties don't require intent to be called. You're responsible for your stick and if it accidentally whacks somebody else in the face, you still get two minutes in the box. If it looks like you brought your stick up and deliberately cracked another player across the face, it's a longer penalty or even a game misconduct.

Why not apply the same thinking to head shots? If it's an inadvertent head shot, it's a two-minute minor penalty. If it's a blatant attempt to clean somebody's clock, give them a game misconduct. And if you throw an elbow at somebody's head, you're out. Period.

This isn't hard stuff. Believe me, even if the on-ice officials caught and called every single head shot, professional hockey is in no danger of turning into badminton.

Pittsburgh defenseman Brooks Orpik is one of the best in the game. He hits as hard as anybody in professional hockey. We've all seen him have shifts where he has simply taken over the game by checking everything in his area. And yet, Orpik doesn't go head-hunting. He doesn't take runs and he doesn't throw his shoulder or elbow into anybody's ear. Do you think Orpik is a wuss? [If you do, I double-dog-dare you to say that to his face.] But Orpik is no wuss and the game is not in danger of becoming some namby-pamby pursuit if head shots are policed by the league. 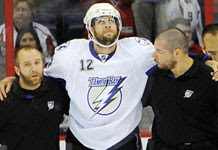 No, if the NHL would take reasonable steps to protect players, ice hockey will not become touch football, it won't become figure skating and it won't become Dancing with the Stars. It will remain a physical, hard-hitting game. The only thing that will change is that we might be treated to watching guys like Sidney Crosby and Simon Gagne actually play in the playoffs. Who could be against that?

As a society, I believe we have all started to change in terms of the way we think about head injuries. Not that long ago, if somebody got a concussion, we used the dismissive term, 'dinged' -- as in, "Oh, he just got dinged. He's fine." But as science learns more about head injuries, we have all started to treat them more seriously. I think that's a good thing. But for the life of me, I cannot figure out why hockey is shrinking from taking this on, why they've taken only the tiniest of baby-steps. They won't lose fans from it. In fact, I think they could only gain a larger fanbase by making a serious commitment to protecting their players.

On the same day that I heard about Crosby's setback, I also heard about the report released on former NFL star Dave Duerson's brain. Wonder if they've read that at NHL HQ in Toronto?