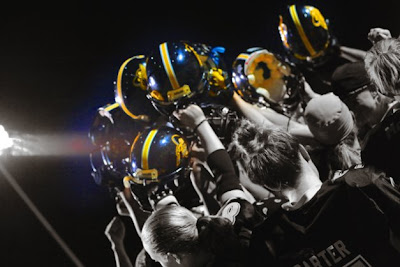 The turning point, according to Michelle Brevard, was the offense getting something going midway through the 3rd quarter. As a six year veteran, team captain and starting safety for the Pittsburgh Passion, I suppose her opinion should count for something.


I don't know about any one turning point. I just thought the Pittsburgh defense played an amazing game, making tackles in the backfield, pressuring the quarterback, harassing wide outs and, though the Columbus Comets had some success running, never allowing Columbus to put together any sustained drives. Every time the Comets got a little something going, or got the ball back after a turnover (Pittsburgh coughed the ball up three times in the first half), the defense rose up to smite them. The success the Comets did have came on the ground, a few first downs picked up here and there, sprinkled over the first two quarters of play, mostly coming on some little counter-running plays. Happily for the about 4,000 fans in the stands (that's my guess, but the attendance could have been higher), Columbus never really posed a serious scoring threat.

Of course, neither did Pittsburgh, as both defenses dominated and the game remained scoreless through three quarters.

"Man, these guys are tough. They're tough. Aren't they?" That was Passion coach and owner T. Conn at one point on the sidelines, and she was right.

It was also partially due to the fact that the Passion offense is an almost entirely new iteration of offense for them. And it looks it. It’s a little hinkey, it lacks the rhythm and consistency that come with endless repetition, players knowing each other like siblings, a seasoned quarterback, the playbook being so deeply ingrained that blocks and routes and reads are second nature. Beyond which, the Comets defense is quite stout, too. They played so well, in fact, that the Passion didn’t pick up a single offensive first down through two full quarters.

Then, as well as Pittsburgh's defense played in the first half, they made some halftime adjustments to tighten up and they played even better in the second half. That bit of running success the Comets had early? That disappeared.

And finally, the Pittsburgh offense went away from any trickeration and let quarterback Amanda Haeg do what she does best -- run. They started grinding out yards, with Haeg eluding and dragging tacklers with her. By the end of the 3rd quarter, the offense drove to the Columbus 2 yard line, where Amy Fallon drilled a field goal to put the team up 3-0.

Those were all the points they would need. But they got some more anyway.

The Passion defense ramped up even more, forcing three and outs, picking off the ball, and setting up the offense with good field position. After a muffed snap on a Comets punt, Haeg hit rookie wide-out Rachel Wojdowski in the corner of the endzone for the first touchdown of the game. After another defensive shutdown and another special teams miscue, Haeg ran the ball in at the goalline for the final score of the game, making the Passion's return to Cupples Stadium a 17-0 victory.

If you missed it, shame on you. But you can watch it here on ESPN3 (just hit replay), or catch the broadcast locally on RootSports on May 5th.

My gameballs go to second year linebacker Ali McGrath, who was everywhere, sacking the quarterback, picking off passes, and stuffing the run at the line of scrimmage and kicker Amy Fallon whose kickoffs helped the Passion win the battle of field position and whose 4th quarter got the scoring started.
Posted by JODY DIPERNA at 1:39 PM