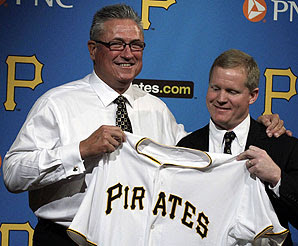 Facebook was not even a glimmer in the eye of Mark Zuckerberg the last time the Pirates won and blogs like this one were unheard of, all of which is to say that my Pirates, if you didn't know, have been terrible for a very long time. And yet, the team seems to be rounding a corner around due in large part to three people:  Andrew McCutchen, Clint Hurdle and Neal Huntington. Whether or not you are on the Bucco Bandwagon or remain skeptical of the team's heretofore success, today seems like a good day to take a stroll through the biggest moves that Neal Huntington has made and evaluate them -- WIN, LOSE or PUSH.


Fall, 2007:  First thing Mr. Huntington did was fire the comatose skipper, Jim Tracy. That was a definite win, because removing a smelly, putrefied object item from your refrigerator is always a good thing, right? But then he hired the even more inert, atrophied John Russell. So let's call this move a PUSH.

June 26, 2008:  Sent Xavier Nady and Damaso Marte to the Yankees and got Jose Tabata, Jeff Karstens, Daniel McCutchen, and Ross Ohlendorf in return. Last year Karstens was the most reliable starting pitcher on the staff and, even though Tabata has been erratic this year, often playing like an old man trying to avoid injury, he's still an upgrade over The X Man. WIN.


July, 2008:  Sent Jason Bay to the Red Sox for Brandon Moss, Andy Laroche, and Craig Hansen (in this case, he would have been better off getting one of the hockey playing Hansons). The idea to move Bay, then the team's best player, to get something rather than simply losing him to free agency, was a good one, but getting Moss and Andy Laroche (or ANY Laroche for that matter), was not exactly making a great deal. We gotta call this one a LOSS.


August 15, 2008:  Drafted Pedro Alvarez. At some point, I'm going to write a longer blog about Alvarez' struggle and his importance to the team, but I wanted to stop here to say that it took guts to draft Alvarez, not because he was an iffy prospect, but because everybody in the baseball universe viewed this guy as a 'can't miss prospect.' Those can't miss guys? They're tough to sign. Particularly when they are represented by the likes of Scott Boras. From the Beaver County Times at the time:

"If and when Pedro Alvarez signs with the Pirates, he will automatically become the most hated player among fans since Dave Parker allowed himself to get woefully out of shape in the early 1980s and became the target of battery throwers in the outfield seats at Three Rivers Stadium." -- John Perotto.

Just for having the courage to make the pick, I'm calling this a WIN. (We can discuss the merits of Pedro at a later date.)

June 3, 2009:  Traded Nate McLouth to the Atlanta Braves for Jeff Locke, Gorkys Hernandez and Charlie Morton. At the time, most Pittsburghers were upset about the loss of our best player (McLouth), but Huntington was right that he was just not a ballplayer you can build around. We still don't know what we'll get from Locke and Hernandez, but we know that Charlie Morton, when injury free, is a solid #3 starting pitcher. Assuming Morton comes back from Tommy John surgery this is a huge win, but there was no way to forecast his injury. It was the right move at the right time. WIN

June 30, 2009:  Traded Nyjer Morgan and Sean Burnett to the Washington Nationals for Joel Hanrahan and Lastings Milledge. At the time, I was bummed. I was a big fan of Nyjer Morgan, but you can't keep T-Plush (twitter feed here) in center field when you have Andrew McCutchen waiting in the wings. Clearly. Milledge never did live up to his potential (I think he's playing in Japan), but the Hammer just keeps on rolling. Frankly, I won't be at all surprised if Huntingdon flips Hanrahan this year the way that some speculators flip houses. WIN

2009 Off-Season:  Sent Jesse Chavez (who?) to the Tampa Bay Rays for Aki 'KneeBrace' Iwamura. Heck, I don't know how to rate this. When I think of the Moribund Era in Pittsburgh (different from say, the Clemente Era, the We Are Family Era, and the Lee Lacy Get Yer Coke Here Era), a few players leap to mind to personify the complete and abject pointlessness of that time. Players like Derek "Captain Operation Shutdown" Bell, Pat "Votive Candle" Meares, and Raul "Say Hello to My L'il Friend" Mondesi (do click on that link -- tears.). Add to that list old Kneebrace Iwamura, who has to go down as one of the worst signings in the history of the franchise. Still, it's not like Huntington gave up much to get him. PUSH

July 31, 2010:  Traded Octavio Dotel to the Los Angeles Dodgers to get James McDonald (and Andrew Lambo). I don't think I need to expound upon this much. HUGE, BIG FAT WIN

July 21, 2011:  Scooped up free agent pitcher Jason Grilli after the Phillies released him. (I view this move as the equivalent of Penguins GM Ray Shero picking Craig Adams off the scrap heap. That move has worked out pretty well for the Pens.) WIN


Sure, he has made other moves, less exciting moves and Huntington has been far from perfect. But when I look over these moves, what I see is a GM with an actual desire to win, the guts to make some big moves and big pick ups, and the courage of his convictions. Now, if he can find a way to get something for Juan Cruz beyond a bag of batting practice balls and a few old rosin bags, I'll be really impressed.