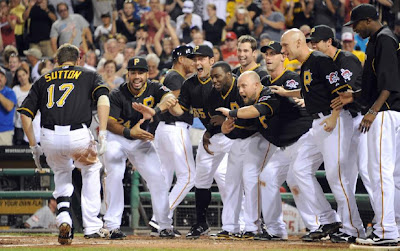 Meanwhile, back at Bucco Central,

On Monday night, I headed down to PNC Park to take in the game with my good buddy Captain Bucco and my other good buddy UConn fan (who, it should be noted, is also a Buccos fan, but that gets complicated.) At any rate, UConn Fan, Captain Bucco and I walked out to the bleachers on a perfect evening, and we watched the game and it was as if we had dipped ourselves in magic water, to paraphrase W.P. Kinsella.

Captain Bucco shared a story, a fantasy really, of what the team might be like away from prying eyes. "Sometimes," he said, "when I'm at the gym and I'm bored on the treadmill, I allow myself to fantasize and I fantasize that A.J. Burnett and J-Mac take the entire pitching staff on a fishing trip during the All-Star Break."

"Entirely possible," I said, knowing what avid anglers Burnett and McDonald are.


"But in my fantasy, in my mind, they camp out. And they all sit up around the campfire telling stories. Instead of ghost stories, they share their deepest fears -- fear of serving up a breaking ball that doesn't break when Prince Fielder is up, fear of just losing their stuff, fear of failure and fear of letting their teammates down."

"And in talking their fears out, they are able to go out and pitch the back half of the season entirely without fear. Sometimes I cry a bit," he paused. "So that's what it's like in my head."

"See, in my version of the fishing trip, Burnett sits around the campfire and just talks complete and utter shit on A-Rod," I said. "You know, he confirms that A-Rod does have that painting of himself as a centaur hung in his bedroom and that Jeter called him 'bitch-tits.'"

Admittedly, my fantasy was possibly more trenchant and definitely more petty, but that's how I roll. Still, Captain Bucco made me pause and, yeah, I was kind of dipped in those magical waters myself. No doubt, I was in love with the Pirates of the early 1990's, but something about this team, the collection cast-offs and misfit toys, has-beens and never weres, a couple of legit players and one amazing superstar ... dare I say it, but they make me feel like a kid again, as caught up and sentimental as any character in a Kinsella story.

One night later, the team that Burnett has helped to carry this season gave him a pick me up and won a game for him when he didn't have his best stuff. That's what good teams do, isn't it? They find a way when their staff ace is off. They get contributions from unlikely sources, and who could be more unlikely than Drew Sutton. They battle and they, wait for it, they have fun. And in so doing, they make us all believe.

I don't know what's possible for this team anymore. I know that without their best player they're doomed. I know that injuries happen and can derail the most magical seasons. I know that a 101 things could go wrong because I've seen all of those unpleasant detours over the last two decades.

But I also know that this team is better than any I've seen since 1992. I know that there is a joie de vivre with this squad that I haven't seen since the great Willie Stargell retired.

Happy Independence Day, yinzers. And all aboard.

WINS NEEDED TO MAKE THE PLAYOFFS:  46
WINS NEEDED FOR THE 1ST WINNING SEASON IN TWO DECADES:  38
Posted by JODY DIPERNA at 9:06 AM