Five Most Pivotal Moments for the Pirates 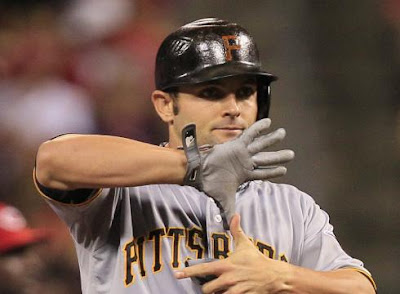 Back at Bucco Central at the All-Star Break, with your 48-37 Pittsburgh Pirates sitting atop the NL Central, I have a moment to reflect on the things that got us here. Obviously the main cogs driving the magical Pirates have been A.J. Burnett's determination and veteran leadership, Pedro Alvarez contributing regularly, Clint Hurdle's genuine affection for his players and light touch, Ray Searage's tutelage of the pitching corps, the amazing bullpen and the even more amazing Andrew McCutchen. Really, I've started to run out of superlatives regarding that guy -- he is nothing short of breath-taking. Still, in the afterglow of Sunday afternoon's beatdown of the San Francisco Giants, I spent a bit of time thinking about very specific moments, five (okay, six) key situations that have made these Buccos so bewitching.


6. Jose Tabata's demotion to AAA. You lollygag the ball around the outfield, you lollygag your way down to 1st, you lollygag in and out of the dugout. You know what that makes you? A lollygagger! I guess Clint Hurdle had seen enough when Jose "Rally Killer" Tabata watched a bloop fall in front of him in St. Louis, on a day when Jeff Karstens was putting in an heroic effort in 105 degrees. Tabata has played the whole season season like a 38 year old player trying not to get hurt but that afternoon seemed to be the straw that broke Hurdle's patience. I hate to start the list with a negative, but I feel like the Pirates sending Tabata down to Indianapolis is crucial because it is the exact kind of move the team never made in the past. There were always eight thousand and one reasons/excuses for allowing guys to be lackadaisical, but the hard truth is that Pirates had forgoten what it was like to have a winning mentality. Winning teams do not tolerate that kind of play -- they do not tolerate dogging it in the dog days. I don't know what this is going to mean for Tabata long-term, but I like what it says about the change in attitude in the Pirates dugout and front office.

5. Fort McKenry touches up the untouchable Aroldis Chapman. Aroldis Chapman strides to the mound, flames shooting from his fingertips, his fastball all-but untouchable. First, the unlikely:  Pirates shortstop Clint Barmes (then hitting an anemic .191) and rips a ground rule double off Mr. Unhitable. Then,  the diminutive Michael McKenry steps into the batter's box and off his bat comes a rocket to deep right, scoring Barmes. Chris Resop nails down the bottom of the 10th for the win. It's important because for the larger part of 20 years, these were the kinds of games the Pirates lost, with their saver allowing the Reds to tie the game in the bottom of the 9th, with the weakest part of the batting order coming up in the top of the 10th, with a reliever coming in who hadn't allowed a single earned run up to that night. But somehow the unlikely duo of Barmes and McKenry won it for them. On the road against the Reds. This is game might be a tipping point when the pennant race all shakes out at the end of the season.

4. J-Mac's complete game.  This is the game where James McDonald proved that he was all grown up.   After eight innings and with a commanding 9-1 lead over the Minny Twinnies, skipper Clint Hurdle threw pitch counts out the window and gave the ball back to his starter to close out the game. McDonald had already thrown 105 pitches by then, a count that would normally indicate a call to the bullpen, but J-Mac wanted the complete game and the coaches believed in him enough to trust him. McDonald is the man on this staff and on June 21st at PNC Park, he showed that he was up to the task.

3. Pedro powers the team to back to back wins in Cleveland, with two two-dinger days. It's pretty common knowledge around here that the Pirates will rely on the bat of Pedro Alvarez if they expect to make any noise in August and September (and in years to come.) They need Alvarez. He is an essential part of the plan. They cannot afford for Pedro to be a bust, or a head case, or just meh. They need him to hit for power and also to hit for a respectable batting average. (.250 would be nice; .260 would be awesome.) In the second game of a three-game set, Pedro came in hitting .198. Opposing pitchers quaked. Yea, verily. Not so much. But they did start to quake after Pedro's two-day hitting spree in which he went 5-for-8, with 2 round-trippers and 9 rbis.

2. Drew Sutton's Walk-Off Tater.  Signing Drew Sutton doesn't make the splash of a signing like Albert Pujols or Prince Fielder. Heck, he doesn't make a splash at all. He is the epitome of a splash-less free agent move, if you will. A career .271 hitter, Sutton hadn't even been with in town long enough to hit the Dirty O when he launched a walk-off homer into the home bullpen against the Astros. Then he got a bit misty when being interviewed by Paul Alexander post-game.I've been watching baseball for more years than I'd like to admit and I know this -- as much as winning teams need guys like Burnett and McCutchen, they also need guys like Drew Sutton.

1. Brad Lincoln against the Phils. It was all going to hell in a handbasket, as things seem to always go wrong for the Pirates in Philly. Not necessarily against the Phillies, but in Philly? It's a horror show. As much damage as the Jerry Meals game did, the three-game blood-bath in Philadelphia that followed put a dagger in the Pirates hopes in 2011.

This year, the Pirates crossed the state for a four-game set. They needed a split to keep pace with the Reds and keep the good mojo flowing. They dropped the first two. Game 3 was crucial. They put up a big 8-2 lead and then the Phils started chipping away at it. With the score 8-7 in the 7th inning, with two men on and none out, Brad Lincoln came out of the bullpen to try to stop the bleeding. First, he got Hunter Pence to strike out swinging. A wee sigh of relief. Then Shane Victorino popped out. Another wee sigh of relief. Charlie Manuel sent out Jim Thome to pinch hit. Lincoln sat him down with three pitches, preserving the lead.  In the 8th, the Pirates bats came to life to add on 3 more runs and basically sock the game away. But this game is a loss -- and a crushing, devastating loss -- without Lincoln staring down the beast.


Bucco Ticker:
WINS NEEDED TO MAKE THE PLAYOFFS:  42
Posted by JODY DIPERNA at 6:49 AM