Down the Home Stretch, What to Make of the Pittsburgh Pirates?

It's been a while since I've checked in here at Bucco Central, too long actually, but I've been meaning to catch up with the Pirates for some time. What have I missed?

Well, oh, let's see, there was, oh yeah, there was a 10 game losing streak that put a stake right into the heart of an otherwise freakishly fun season. That put them in such a quagmire, they couldn't dig themselves out.

What did it? What was the beginning of the end for an otherwise magical summer? Well, most everybody keeps pointing to the crushing 19 inning loss at Atlanta, which, no doubt was one of the worst, most painful losses a team can suffer, but I don't think their problems started because they ended up on the wrong side of an atrociously heinous call.

Rather, I think that 19 inning marathon took a lot out of them, regardless of the outcome. Worse, it came just five games into a 20 game stretch without a day off. They played too many innings, with too much travel, against really good teams, with no time to rest regular players (which Clint Hurdle really makes a point of doing), and worse, no time to rest any of the pitchers, either the bullpen guys or the starters. Frankly, I was shocked that Hurdle didn't go to a six man pitching rotation to get them through that stretch, but he probably didn't want to lose a position player to bring Brad Lincoln into the starting rotation.

Right at the same time, mind you, the wheels came off Kevin Correia. Sadly for me, I was at PNC Park for Correia's worst game ever -- a two-inning effort, in which span he gave up four home runs (that's gotta be like, a record or something), 10 hits and eight runs. I've seen addled octogenarians throw more heat at batting practice than Correia was throwing that night.

Just to give you an idea of how dramatic the change was:  Correia's April ERA was in the rarified air of 2.90; in May, it climbed up to 4.15, a respectable, workmanlike ERA; in June it climbed up another notch to 4.46, which a team can still win with, provided they can score some runs. And then it all turned to shit. His awful 6.08 July ERA climbed up to 8.41 in August and now he's landed on the 15 day DL. Probably fortunate for his bloated ERA, which could easily climb into double digits with another two or three appearances. 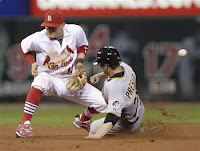 One of the other huge factors, to me, was the loss of Alex Presley. A 26 year old rookie is not supposed to be an impact player:  if you make it to the ripe old age of 26 in the minors, well, that's typically where you end up.

And yet, the diminutive (they guy is only 5' 9" and about a buck-sixty) outfielder is electric. I personally think that his going on the DL three games before that brutal loss in Atlanta had as much to do with the Pirates fall from grace as anything. From his call-up on June 28th through his injury on July 22, with Presley in the lineup, the Buccos were 12-8. Once he was out of the line up (from July 23rd to August 24th), they went 10-22. I know the team is bigger than one guy, but you cannot deny his unusual gift for starting rallies, stealing a base at just the right moment, getting a hit right when they need it most. His loss really hurt them this year, but looking down the road, I think the Pirates have really found something in Presley.

Here are some bullet points, a couple of things that happened to the team that set in motion the pieces that lead to their horrendous July and August:

One. The Cinderella pitchers turned into pumpkins, which is to say, Paul Maholm and Kevin Correia both turned to clay. Both are now injured, but even before they hit the DL, neither looked like the pitchers we had seen in April, May and June. Teams with a proper No. 1 pitcher (say, Justin Verlander of the Detroit Tigers, or Roy Halladay for the Phils, or ... you get the idea), can stop skids just by sending that guy out there to the mound. Despite the fact that Correia was the Pirates No. 1 guy, nobody ever really thought he was a proper No. 1 pitcher.

No, what the Pirates have, and what pitching coach Ray Searage has made the most of are five guys who would be the third or fourth pitchers on other teams. And you can win a lot of games that way -- the Pirates did -- but when the wheels start to come off, you don't have a brakeman. That's just what happened. Nobody could stop the skid once it started. It was a runaway train without brakes.

Two.  Injuries. Yeah, every team has them, but the Pirates lost Jose Tabata for a large stretch of the season. They ran through six catchers. They lost Derrek Lee as soon as they signed him. They lost the electrifying Presley. I could go on, but one of those injuries leads me into my next point.

Three.  Bullpen. They were, by and large, a bright spot that I thought would be absolutely dismal, but they were without the services of Evan Meek all season long. I think that really hurt the 'pen. The amazing Joel Hanrahan is not perfect, but he's the best closer we've seen since Teke. Meanwhile, Jose Veras is just too wildly inconsistent to be a proper 8th inning set up man. Sometimes, he is over-powering, but other times he's so off that he couldn't hit water if he fell out of a boat. A healthy Meek might have only been the difference between where they are and another, say, four wins. [Four wins may not seem like much, but in the middle of a bad slide where you can't buy a win, a win or two in the first weeks of August might have helped to pull them out of the vortex of despair where they were stuck.] 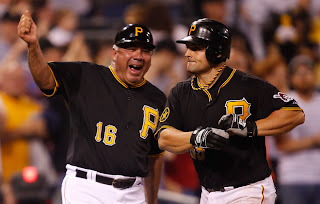 Four.  Run production. This has been a problem all season long, but some how, during their magical run in June, while they weren't scoring many runs, they were scoring timely runs:  Michael McKenry's clutch dinger against the Cubs on July 8th; Tabata bringing in Xavier Paul against the Phils; Presley hitting a triple to bring home Brandon Wood against the Astros. And on and on an on. But without Presley, and without Tabata, and with Hurdle using Garrett Jones very little, there were just no timely hits. Hell, maybe the fairie dust just ran out for the Pirates hitters, too.

I now interrupt this column for a (several) paragraph(s) or to devoted to the perceived need for a power hitter. All year, everybody's been wanting a power hitter for the Pirates, harping away that they have to have a home run guy and that would be the answer to all their woes. Er, wrong.

It would be nice to have a big bopper in the lineup a'la Mark Teixeira or David Ortiz or Prince Fielder. But those home run guys? They carry fat-ass price tags and I'm not sure the price-tag is worth the run production for a team like the Buccos. I'm not sure you want to give one-tenth of your total payroll to one single player, even if he does hit 30 four-baggers a year.

What the Pirates really need are guys who can hit for average consistently. There were so many games this year when a timely single would have done it, would have brought in one or two runs and cracked the game open. As the most recent example, I give you the Pirates v. the Cubs, just on Sunday. Up by a score of 1-0, Jones led off the 2nd with a double. Already, there are zero outs with a man in scoring position. Ronny Cedeno singled and Jones moved to 3rd. So we've got men on the corners, again, with nobody out. Next up, McKenry worked a walk. So the bases are loaded with nobody out. Morton struck out swinging. Presley popped up. Josh Harrison flied out. A single single and the game is 3-0, with perhaps more runs to come. Would a grand-slam have been nice there? Sure. But I would have settled for a two-run single.

It's just this simple -- they don't need home runs, they need better hitting. And by better, I mean more frequent, 'hit 'em where they ain't' sort of hits. They don't need to be swinging for the fences, so much as taking what the pitcher is giving them and dropping the ball into gaps. 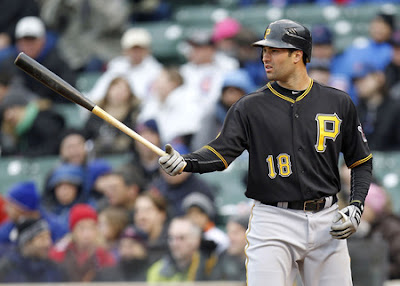 And so, with Steelers season upon us, things are back to normal around here, which is to say, it's pretty much Steelers talk all the time because the Pirates find themselves not just out of the playoff race, but out of a race to .500. [Not technically, mind you. Mathematically, they could finish .500 if they were to win 16 more games. Out of 21 games remaining. You can view that as a possibility if you chose to. Me? Not so much.]

But there's some good news, even through the bad -- thoughts I will expand when the season is over for real, but, for now, suffice it to say that I have hope for next year. Beyond which, and perhaps more importantly, the Pirates made baseball fun again. At least up to the All-Star Break, it was a real blast, more fun than I've had in a long time as a Pirates fan. They've shown a willingness to build through the draft (and actually spend on the draft.) They have the right skipper and a whale of a pitching coach. They showed a remarkable amount of smart, savvy restraint at the trading deadline this year. My confidence in Neal Huntingdon has grown in leaps and bounds this year. So more on all of that, on Andrew McCutchen, on Neil Walker, on Jeff Karstens, et al., at a later date.

We now return you to your regularly scheduled NFL action, Pittsburgh.
Posted by JODY DIPERNA at 1:30 PM