As you may recall from our last installment, Pitt and Syracuse are bolting from the Big East to, em, more upscale accommodations the Atlantic Coast Conference. West Virginia wisely tried to piggy-back along with Pitt and 'Cuse, but they were flat-out rejected by both the SEC and ACC, per this report at CBS Sports.

Hey, it's a dog eat dog world out there in college sports.

Meanwhile, from his seat up on high, balancing upon his golden dome of judgment, Notre Dame Athletic Director Jack Swarbrick weighed in on Pitt's move. Per the USA Today:

"I'd like to know how much of these discussions are: What's right? What is the best thing for the larger enterprise, and how many other schools would be adversely impacted?

"I don't understand it," Jack Swarbrick said as a new round of conference hopping in college athletics moved into high gear Sunday. "How do you vote as a collegiate president on something that has the potential to provide some benefit for your institution and the conference you're affiliated with but has a very negative consequence for a host of other members of the academy, as presidents like to call it?

Not to put too fine a point on this, but Notre Dame can suck it.

Here's the deal. The conference shifting? It's all about football money. Nobody gives one rat's ass about women's soccer or men's wrestling. Even basketball is left out of these considerations. It's all football, all the time.

But it's not even about quality -- it's just about viewership. West Virginia has been the best, most consistent football program in the Big East since the last raid, when Boston College, Va. Tech and U. of Miami bolted for the ACC, so the SEC and ACC can say what they want:  the real reason WVU is the wallflower in this little conference shake out dance is they don't bring much to the party in terms of television markets. The closest big(ish) market to WVU is Pittsburgh, and Pittsburgh is dominated by the Steelers, Pitt and Penn State. In that order.

It's about football television money. Not to beat a long dead horse.

I know it. You know it. Pitt Chancellor Mark Nordenberg knows it. And Jack Swarbrick sure as hell knows it. And yet, he felt comfortable basically calling Pitt out for leaving a sinking conference:


Countered Swarbrick, "It would be one thing if you could say, look, what it does is painful but at the end of the day what it does is fix some significant flaws or issues. But I don't think the case for that is very strong. And certainly, what it does to impressions of the industry and relationships between institutions that have reason to work together for a host of reasons beyond sport isn't good.

Oh, sure. Go ahead Fighting Irish -- Be a member of the Big East for all other sports but football. Take advantage of the amazing competition in men's and women's basketball and all the air-time Big East basketball gets on ESPN broadcasts. Revel in the men's tourney at Madison Square Garden. But the one single thing that you could do to stabilize the Big East, you won't do.  I do believe that dictionary.com changed their definition of "disingenuous" to include a photo of Swarbrick. 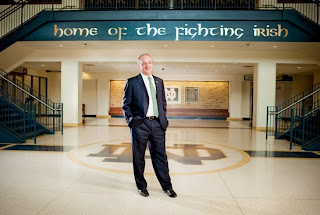 I honestly don't care what Notre Dame does in terms of it's football program. It's their prerogative to go their own way with their football program and their own television stream protecting them. What they have forfeited, though, is the right to comment on other universities saving their skins.

I'm not a fan of the conference re-alignments. I remember the Oklahoma-Nebraska showdowns from my childhood and it bums me out that we won't see that anymore (unless Okla. ends up in the Big Ten, too). I'd hate to see the Texas v. Texas A & M games become a thing of the past. I generally don't care for all the conference jumping. Change is bad.

But it is what it is and this shake out is far from over. Had Pitt and Syracuse just stood pat, stuck their heads in the sand, and ended up holding a bag of crap in a decimated Big East, with no options for moving ... Well, let's just say that pretty much everybody involved with athletics would have been off to the guillotine.

Four 16-team super conferences are coming and they are coming sooner, rather than later. Pitt and Syracuse saw the hand-writing on the wall. And then acted according to their own best interests. Would Notre Dame have done any differently? Really? Really.
Posted by JODY DIPERNA at 5:17 AM