The Pittsburgh Pirates Say: Who You Callin' Cheap, Bub? 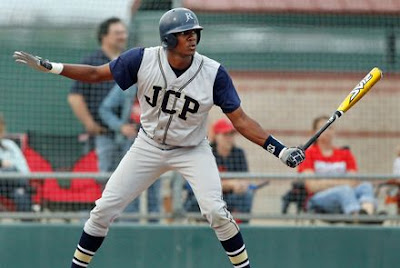 Back here in the Burgh at Bucco Central:

Late on Monday night, the Pirates signed their top two draft picks -- Gerrit Cole and Josh Bell, spending $17 million dollars in bonuses to do so. These bonuses put the Pirates in front of every other team in terms of spending on the draft and, in the Neal Huntington era, they have spent about $47 million on the draft, the most of any club in MLB.

Not to cheerlead for the Pirates, but can we stop saying that they're too cheap? Or not trying anymore? Just because they may fail, just because this particular team hit a losing streak of bibilical proportions (I was expecting a plague of locusts to descend upon the clubhouse any second), just because Pedro Alvarez is positively painful to watch at the plate, doesn't mean they aren't actually trying to win.

I get it. I understand the frustration. I was one of those who said, 'they don't want to win.' To be honest, if they weren't actually using the script from 'Major League' as a 'how to' guide, they just didn't care about winning or if they did, they didn't care enough to hire people who actually understood what it would take to win.
It's hard to think otherwise, given all the awful managers, salary dumps, the moronic veteran signings, the mis-handling of Rule 5 drafts [shivers], and steering clear of top draft picks, particularly those represented by Scott Boras or Drew Rosenhaus. [Both of those guys are scumbags of the lowest order and I cannot figure that neither of them has an entry at Dickipedia. But still no excuse for Daniel Moskos over Matt Weiters. Really? Really?! ] Basically, at best it was a half-assed effort by the Pirates organization. Yeah. Ugh. Moving on.
In the last couple of years that draft timidity is gone. Or at least mostly gone. What I'm saying is not that they've drafted perfectly but they are trying to draft well. We all know about Alvarez' struggles, but everybody with a brain involved in MLB said he was the guy to draft. The Pirates drafted him anyway, knowing he'd come with a huge price tag and knowing that they'd have to deal with the ultra-noxious Scott Boras. It is to the Pirates credit that they drafted Alvarez (the best player available by everybody's estimation), and then signed him. If Pedro really does flame out over the next couple of years, I can't hold Huntington, et al responsible for that. That's on Pedro himself. Period.

[Which reminds me -- I believe Scott Boras is the No. 1 reason that Pittsburgh fans turned on Alvarez faster than a meth 'ho can turn a trick. All small market fans and civilized people hate Boras with the heat of 1,000 suns. As they should. The guy is a creep. But if you think I'm exaggerating the Boras Effect -- read this from ESPN's Jerry Crasnick from September, 2008.]
Fast forward to this year. Knowing that, once again, Boras was in the picture, the Pirates first selected Gerrit Cole and took masher Josh Bell with their second pick. Some MLB analysts felt that Bell could have gone as high as the ninth or tenth player taken overall, but he had stated his desire to go to the University of Texas. Some clubs stayed away. But the Pirates didn't. They took a chance that they could get him, knowing that they would get a compensatory pick (one spot lower than he was taken) next year. It was a good risk to take, the kind of risk they had shied away from in previous seasons.
Here's what I know about anything in life:  if you apply yourself, if you work hard, if you have a plan and execute it, if you devote yourself towards attaining a goal ... you still may fail. That's the sad truth.

But if you don't try, you will always fail. Guaranteed.
Happily, I believe these Pirates are actually trying to put together a winning club. With zero guarantee of success.

Meanwhile, in other big Bucco News: 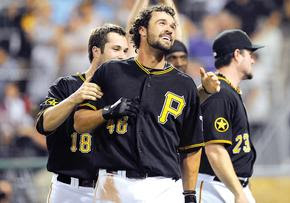 The second happiest man at PNC Park last night had to have been home plate umpire Jerry Meals when Garrett Jones launched an 11th inning home run that cleared the right field seats altogether, bounced once on the riverwalk and landed in the drink. It was a great game from the Pirates, full of the kinds of things they were doing throughout May and June that had the city a-buzz:

-- another solid start from Jeff Karstens. Not as sparkling a start as we've seen from him in the past, but still, a start good enough to put his team in a position to win.

-- it's wonderful to have Jose Tabata back in the leadoff spot. Man, did they miss that guy.

-- a huge three-run dinger from Andrew McCutchen. It all works for the Pirates when Cutch is racking up RBI's.

-- tremendous fielding and speed in the outfield with Xavier Paul robbing Yadier Molina of a sure line-drive double to lead off the 11th, and then McCutchen committing felonious theft of Albert Pujols' shot to the gap to end the 11th.

-- another solid outing from the bullpen. Especially stalwart were Jason Grilli (getting the Pirates out of the 6th inning jam) and Chris Resop who took them through the 10th and 11th. The bullpen has been all hands on deck all year, but last night was one of the very few times we've seen Joel Hanrahan stumble, so it was nice to see Grilli, Resop and Jose Veras pick him up.

-- a clutch hit from Neil Walker. In these two games against the RedBirds, he's gone 5 for 8 with 2 RBI and 3 runs scored. More to the point, he's hitting the ball with authority, right on the button, just about every time up to the plate. I think we can state, officially, that the slump is over.

-- and the homer from Jones. I have to wonder what Jones' numbers might be like had he gotten more starts, both in right field and at 1st. I know they wanted Matt Diaz to face left-handed pitching rather than Jones .... and I know they got Lyle Overbay to be the everyday 1st baseman. But still ... it's worth thinking about.

Later in the week, I'm going to take a look at what went wrong for this Pirates team after the All-Star break and ruminate on what they have to do to make this season a success, even now that the playoffs are out of reach. But today is a day for pleasant thoughts. So today I'm just going to enjoy the afterglow of last night's victory over the Cards.