Reactions to Steelers v. Eagles in the Preseason 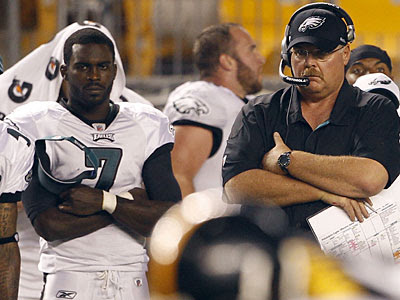 And this is why I love media hype. Some idiot says, "it's like playing on the Dream Team" (Exhibit A:  Idiot -- Vince Young), the media runs with it like a starving dog with a Tuscan steak, prompting the rest of us jump on the Philadelphia Eagles Haters Bandwagon. All Aboard! (The NFL:  bringing you knee-jerk Pavlovian responses since 1958 ...)

It's times like this when I miss Lee Flowers. You just know he would have been calling the Eagles 'paper champions' in the locker room last night. Ah, good times.

At any rate, here are some other thoughts about last night's game: 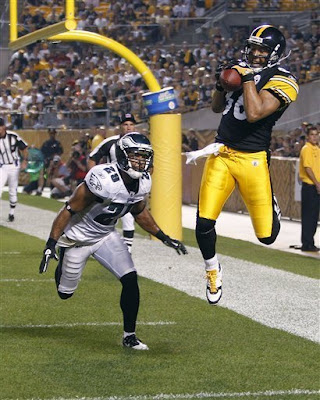 If the late, great Myron Cope were here, I know just what he'd say: 'He went up there like Nijinsky. Nijinsky!'

-- Go down, Troy. For the love of all that is holy, go down! We know from experience, as goes Troy Polamalu, so goes the Steelers defense. The last thing that team needs is for Troy to be dinged up before the meaningful games ever start. However, his interception before his reckless zigging and zagging was vintage Troy. Please stay healthy. Please.

--  The maturation of Ziggy Hood. I admit, I was a bit impatient with young Mr. Hood, but he's grown into a very good, competent defensive end. Welcome to the bigs, kid. [You know what kills me? Restraining myself from making shameless Ziggy Stardust & the Spiders from Mars references. Kills me. Every time. It actually gives me physical pain.]

-- Is the offensive line going to be a triage unit again this year? Jonathan Scott went down on the first play from scrimmage. Marcus Gilbert, the team's 2nd round pick from Florida, came in and, despite one holding call, looked very good, quick and smart out there. [Dear Mr. Colbert, please always draft offensive linemen from Florida. Thanks.] But then Gilbert went down with a hyper-extended knee, so the team had to shift Tony Hills from guard back out to tackle. And it's a shame because the beat reporters were saying that they felt Hills really showed something when moved to guard. Meanwhile, Scott says that he has an 'inner-Godly' feeling that he'll be okay. For what that's worth.

-- The clock is ticking on Keenan Lewis, but he's looked pretty good to me. We all know that he spent good portions of the 2010 season in Mike Tomlin's doghouse for general stupidity. Hence, I dubbed him, "The Stupid" (although that title had been originally conferred upon Anthony Smith some time ago.) It seems to me that there is somebody on the roster every year who can be called "The Stupid" and I hope that Lewis passes the dubious title on to somebody else this year -- he's speedy and he might be the second best CB they have on the roster right now. Fingers crossed.

-- When he's not busy fumbling or tweeting inanities, Rashard Mendenhall sure can run. He looked spectacular last night.

-- If you play fantasty football (and I don't), and if you have the chance to snatch up Antonio Brown, you'd be an idiot not to do so. He's lightning fast, he finished the season so strong last year, and with the injury to Emmanuel Sanders, he's getting way more reps this year. I believe he's going to have a monster year.

-- As my friend Smiley says, I'm really liking me some Cotchery. Wait, that sounds dirty. Jerricho Cotchery is going to be a nice addition to the receiving corps this year.

-- Wait. The Steelers have a kicker on the roster named Swayze? Yup. Swayze Waters. How much you wanna bet his mom's favorite movie is 'Dirty Dancing?' Nobody puts Baby in the corner.

-- The ageless Dick LeBeau. Honest to god, that guy hasn't aged one day in like 20 years. It's freaky.