Super Bowl XLIII Memories ... Or, Just So Long as I Do Not Have to Sleep in a Tent 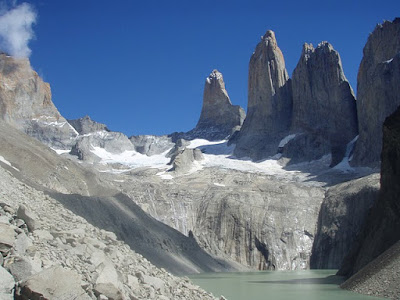 I grunted. Then I continued twitching and tossing and fidgeting on my side of the tent. My crampy left calf was keeping me up, beyond which, sleeping on the hard ground was always a dicey proposition. I wasn't complaining so much as making very unhappy pre-verbal sounds, like a cranky toddler too tired to sleep.

And then there was the black and gold elephant in the tent.

At that moment, as I lay in a tent in a remote area in southern Chile, the Pittsburgh Steelers were playing in Super Bowl XLIII. I had managed to banish thoughts of the game from my head through our long day of hiking (more than 12 hours), but in the quiet of the tent with no other distractions (save for that crampy left calf muscle) I had one, intrusive, insistent thought: I cannot believe I am missing the fucking Super Bowl!

Somehow, I thought I could handle it. To this point, I had managed not to think about it, immersed in each day of hiking in one of the most beautiful areas of the world, plus I was often distracted by searing pain in my bionic, rebuilt ankle, so I had that going for me. Still it was crazy, inconceivable that I would miss the Steelers, the Pittsburgh Steelers mind you, playing in Super Bowl XLIII. I had given some thought to what it might be like to miss the game, but with game night coming down around me, no access to a television or even the internet, it was more slippery, trickier than I thought it would be.

While my fellow 'Burghers were cooking and cleaning and gearing up for the game, I was hiking to The Towers in Torres del Paine (pictured above), a trek that is pretty much straight uphill from the start. It's not technical climbing by any stretch, but it is a consistent climb for many hours which eventually brings you to the moraine at the base of the Towers. You've got to climb up this moraine -- loose rocks and boulders -- at an even steeper incline for about mile to take you to the Towers. That one mile? Takes almost an hour because of the grade, but also because the footing is a sprained ankle or blown out knee waiting to happen, so even those fittest of trekkers have to tread carefully. It was quite the day, too. The photo above is one of mine and I'm told that many a trekker has made the long hike to get there, only to have the Towers themselves obscured by cloud cover.

It had been an amazing, exhausting hike and we had wildly entertaining company at dinner, so it was easy enough to not think about the NFL. We even saw a guy hiking up the moraine in a pair of underpants. No pants, mind you, just a black hat, black vest, and hiking boots. He looked like an outcast from the San Francisco Gay Pride Parade circa 1992, save for his navy blue underpants with little clouds on them. That provided us hours of entertainment at dinner as we all wondered just how he came to hike in Patagonia without pants? Perhaps his luggage was lost? Maybe he was attacked by a feral guanaco, who ripped his pants from his body? Nah. I was convinced and remain so to this day that that he was German.

As Ben Roethlisberger and Santonio Holmes marched the team down the field for the game winning touchdown, I was laying in a tent, trying to be mindful of just how lucky I was. After all, how many people get to hike in Patagonia for over a week, treading their way through the Fitzroy range in southern Argentina and then in the Torres del Paine range in southern Chile? But sports allegiance in America is a funny thing. It defines us in many ways. I am, a writer, cook, reader, glass cutter, kayaker, hiker and a Steelers fan. It's not merely some entertainment, but part of who I am.

I am also a traveler. What to do when the two come in conflict? Super Bowl? Or hiking in Patagonia? Of course, as a Pittsburgh sports fan, the best time to travel is the summer time, the domain of that testament to irrelevancy, the Pittsburgh Pirates. But it's a terrible time to travel -- expensive and crowded. The best time to leave home is smack dab in the middle of football and hockey season. It's a constant conflict and one that I still haven't learned how to balance.

It seemed silly to fret about a game, so I lay there castigating myself for feeling sorry for myself. I was in this amazing place seeing incredible things and I was bumming because I was missing a game? Seriously? 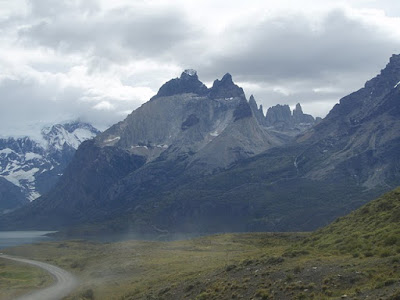 It was a long and mostly sleepless night -- what with the cold, hard-ground, the cramping leg, and the shameful self-pity. But the next morning, with the above picture my view at breakfast and another day of trekking in front of us, it was hard to feel anything but exuberant. A nice guy who worked at the campsite also had the world's weakest internet access and while it took him about 20 minutes to get the ESPN.com site to come up, I was truly grateful for his patience. That's how I learned the Steelers had won -- on a computer moving at glacial speed. (Given that I had hiked near and around several glaciers on this trip, it seemed somehow fitting.) It would be ten more days before I was back in the States and could see a replay of the game. (That's a whole other story. Damn you DVR! Damn you!)

So this year, no matter the outcome, no matter the quality of the game, I am here, able to watch the game in live action and, most importantly, sleep in my own bed. But I have to admit, a small part of me wishes I were going to be in a tent in some other remote part of the world, able to enjoy the news of the outcome at a distance, without the inevitable tension and anxiety of watching the actual game. Funny that.
Posted by JODY DIPERNA at 12:25 AM