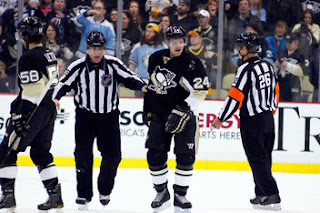 For a decade, Matt Cooke was among the dirtiest players in the NHL. He had a game beyond the cheap stuff, but still, if there was a questionable hit to be thrown, he threw it. If he could take a guy out, he did. When he arrived in Pittsburgh in 2008, I was torn. I absolutely loved the rest of Cooke's game, but the head-hunting bothered me. Watching him over the years, I loved his energy and the way he crashed the net. I loved how hard he played. But the flagrant elbows to the head and the reckless disregard for player safety troubled me. I wrote about how much it bothered me a number of times, in a number of places, but the two I remember writing were after Cooke's hit left Marc Savard positively lifeless on the ice and after he threw a flagrant elbow to the head of Ryan McDonough. Those were some of the worst hits I've seen, the kind of hits which need to be completely eliminated from the game.

After Cooke missed the remainder of the 2010-2011 season (serving the suspension of the McDonough hit), he was basically on notice by the team. Pittsburgh Penguins GM Ray Shero told him -- one more strike and you're out. In the summer of 2011, Cooke did some soul searching. He sought advice from a number of sources. He decided to play the game differently and worked hard to learn how to do just that.


In 2011-2012, he was a new man and for those of us who watch Matt Cooke on a regular basis, the transformation is nothing short of remarkable.

Last season was his first after his come to Jesus moment. He served just 44 penalty minutes in 82 games. By way of comparison, the year before he served 129 minutes; and the 2009-2010 season saw him spend 106 minutes in the box. [Note that Derek Dorsett of the Columbus Blue Jackets served 235 PIM in 2011-2012, and Zac Rinaldo of the Philadelphia Flyers served 232 PIM. Meanwhile, Ottawa's own Chris Neil spent 178 minutes in the box. Just as a reference point.]

But it isn't just penalty minutes. It is more than that. You have to watch Cooke to appreciate the difference. Gone are the head-shots. Gone are the blind-side shots. No more targeting of helpless players. I've seen Cooke actually pull up, rather than hit an unsuspecting player. Heck, I've seen him pull up a few times when he could have taken a clean hit.

For those of you living in Boston or New York or Detroit or Calgary (after all Cooke played nine of his seasons in Vancouver), I know that you are shaking your head in disbelief. I don't blame you. I don't blame you one bit.

You do, in fact, have to see Cooke play to believe it. But I have seen. And I do believe.

On Wednesday night in Pittsburgh, in a game against the Ottawa Senators, Cooke played his best game of this season. He was all over the ice, making smart plays with the puck and with his body. But that performance was marred by the awful injury of Erik Karlsson. While Cooke and Karlsson tangled briefly in the corner for the puck, Cooke's skate came down on Karlsson just above the boot. [Video here.]

Some think it was a deliberate move to injure Karlsson, but I don't think it was. I think you'd have to be a seriously heinous a-hole to try to cut somebody's foot off with your skate a'la 'Justified.' And, frankly, in a league that tolerates and applauds fighting, even the goons seem to have a certain code vis-a-vis injuries to knees and ankles. It is verboten. The cheapest of the cheap-shot guys generally stay away from trying to injure somebody's legs (or as they say in hockey, lower body.)

Players don't go after knees and ankles. Not even the Hanson brothers did that.

In Ottawa, fans are understandably upset over this injury. They want retribution and were I a Sens fan, I'd probably want my pound of flesh from Matt Cooke, too. I'd be pissed to see the best player on the team go down with an injury that essentially ruins the season. [Penguins fans who watched the team struggle without Sidney Crosby should be able to empathize, even if we disagree about Cooke's intent.]

Reputations are hard things to shake. Maybe it's impossible to change minds. When I was a teenager, I met some woman who was my parents age, seemed like a nice woman, married with kids and all that. I don't remember why or how, but this woman came up in conversation with my grandmother who was quick to say, "Oh, she was always a tramp." I don't know if that woman was a tramp when she was younger or if she just slept with one guy and her reputation built like wildfire, through whispers and hyperbole. Maybe she was a real-life Rizzo, but however it happened that she got that reputation, 20-something years later, she was still marked with the 'tramp-tag.' (Not to be confused with the tramp-stamp, of course.)

I remember thinking that while I believed the whole 'permanent record' thing to be a steaming pile of horseshit, a reputation was impossible to overcome. No matter how many years had passed, and no matter how much of a model citizen she might have been, 'Rizzo' would always be a tramp.

And so it goes with Matt Cooke. Had Karlsson's leg been sliced by the skate of Matt Niskanen or Paul Martin, I don't think we'd be hearing quite so much about intent. I do believe this particular incident was an accident -- a really, really unfortunate accident.

But Matt Cooke earned this reputation through years of recklessness and deliberately chippy shots.

It's very hard to change -- to learn new muscle memory, as it were -- as you get older. Old habits die hard. What Cooke has done is unusual, commendable and unlikely. But he also has to know that, to most hockey fans, he'll never get the benefit of the doubt. This is the path he created for himself.