The Curse of the Winter Classic Sweaters: A Call to Action! 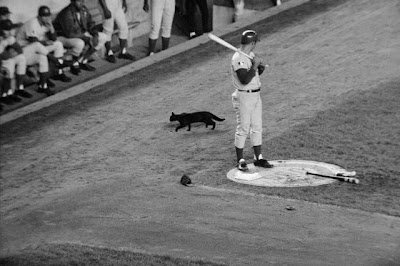 Personally, I don't cotton to curses or karma. I don't subscribe to the belief that mystical forces are afoot in the real world, with fairies and trolls wreaking havoc in our daily lives. I don't believe in god and if I did believe in god, I'm pretty sure he or she would be far too busy with other things than to worry about torturing the fanbase of this or that particular sports franchise.

And yet, I do believe there is patently obvious bad juju around the Pittsburgh Penguins alternate sweaters.

First, they're just too busy. My eyes go all glassy with all those baby blue stripes along the forearm and the base of the sweater. Somebody pointed out that those stripes might look better if there were little swimmers in each lane. Navy blue? Since when is navy blue a primary color in the uniform scheme for the Pittsburgh Penguins? Huh?

But you don't have to get lost in a sartorial critique to hate the alternate sweaters.

It's a matter of simple math. Do the Penguins always lose when they wear these sweaters? A quick check of my razor sharp memory says yes. Yes, they do.

Geno's knee hates the sweater so much that it starts to throb and ache at the mere thought of putting on the alternate jersey.

Did the Penguins locker room look like a MASH unit on a busy day during the season in which they busted out these beauties? Check. Was Dan Bylsma running a regular shuttle to Wilkes-Barre to bring in fresh bodies in the first season of the WC sweaters? Check.

Did the greatest player on earth sustain a severe concussion during the inaugural wearing of the sweaters? Checkmate. I don't ever want to see these sweaters again. Why do they keep torturing me with them, forcing to remember last year's Winter Classic? A hockey game that was neither wintry, nor classic. And a game that was one of the darkest moments in Penguins history.

As much as I blame David Steckel and Victor Hedman for Sidney Crosby's concussions and the miserable aftermath, I blame those fucking sweaters.

How can we lift the curse of the Winter Classic sweater?

I don't think we have to do anything silly like those Cubs fans who had a priest sprinkle holy water in the Wrigley dugout. Or worse, the Sawks fans who famously brought professional witches into Fenway. (And I'd like to know -- just how does somebody become a 'professional witch?' Can I just google that and find one in my city? Are their groups on FB or something? Is there an association or an accreditation board with continuing education credits and stuff?)

I have a simple plan, one for which no witches or priests or Imams need apply.

Step One:  Ray Shero, Dan Bylsma and the rest of the brain trust of the Penguins agree that they will never, ever, ever wear these diabolical jerseys in a game. Or at practice. Or to go to the mall. Or as a sleep shirt. Or even to clean out the basement or paint the bedroom. Simply put, there is never a time when Marc-Andre Fleury should ever pull one of these sweaters over his head. Just like never.

The second step is trickier. I've given this a lot of thought. First I considered re-purposing the sweaters, perhaps installing a drop box outside the Consol Energy Center for fans to deposit the WC sweaters and thereupon, I could have them shipped to third world nations, so impoverished little children could wear them in the chilly night air. After they changed out of their New England Patriots Super Bowl XLII Champions tee's, of course. But I don't want to spread the scourge of the sweater to unsuspecting populations.

No. We have to handle it right here in Pittsburgh -- we need to exorcise the evil sweaters.

I propose that each devoted Penguins fan torches his or her alternate sweater. Yeah, yeah, I know they cost you about a buck-sixty per, but this will totally be worth it. Totally.

Douse it in nail polish remover and toss a match on it.

Put it in the backyard firepit.

Take it camping with you and use it for tinder.

Take pictures of the fire. Tweet it, text is, list it as your status update, use it as your profile picture, send it to everybody in your google circles. Post it at your blog or whatever passes for your own personal social media empire.

Hell, you still have your classic Lemieux, the powder blue Crosby and the home black Orpik anyway.
Posted by JODY DIPERNA at 2:38 PM