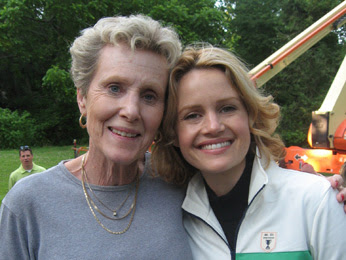 [The real Cathy Rush and Carla Gugino as Cathy Rush in 'The Mighty Macs']
I've written a ton about women's sports over the years in this space, most predominantly football and basketball. As I reported on local women's basketball programs (Seton Hill, Pitt, Duquesne), I kept running across links and ties to Immaculata College, the little women's college that could. No matter where I went, there was another connection to Immaculata -- from my excoriating of Rene Portland, to Suzie McConnell-Serio lighting up at the memories of being coached by Theresa Grentz, to spending an entire day with the dynamo, Ferne Labati.

So I started educating myself about the real Mighty Macs, the players and the coaches. I started to read about the first women's championships. I learned about the old game that girls used to play.

Back in the 1960's, girls played an entirely different game of basketball. They played six players to a side, three each on one half of the court. Basically, three players were designated as defensive players and three were offensive players. There was no running of the floor. Players had to dribble twice with every two steps (unlike the women's game now -- dribble once for every two steps. Or, in the NBA, dribble once for every four or five steps-ish.)

The Macs were the first team to dominate when the game opened up, winning championships in 1972, 1973 and 1974, despite being a small school and, get this, despite the fact that they didn't even have a home gym, not for games and not for practice.

The influence of this one tiny little Catholic school in in the countryside outside Philadelphia, cannot be understated. I wrote a wee review of it at my other blog, Muscle Molls. The Might Macs review here or just below:

THE MIGHTY MACS TELLS AN UNTOLD HISTORY
I went to see 'The Mighty Macs' on Friday. The movie (loosely) tells the tale of coach Cathy Rush and the Immaculata College Mighty Macs basketball team during the 1971-72 season, in pursuit of a national championship. It's not a great movie (more on that later), but it is an important one.

About midway through the movie, the team suffers another depressing, humiliating loss and afterwards coach Rush (played by a very stylish Carla Gugino) decides to try something new. Late at night, while driving the team back to their rural Eastern Pennsylvania campus, she stops the van on the side of the road and orders her team out, then has them run defensive footwork drills through a puddle-filled drainage pipe late at night. She is relentless. "Again. Go! Again. Again," she tells them and the players awkwardly splash back and forth through the pipe, falling and getting back up, going back through, over and over and over.

Certainly, every sports movie of the underdog genre has such a moment. Sometimes it is a montage and sometimes it's just a single scene, but it is the turning point of the movie, the moment when the team coalesces while battling adversity, when individuals break through via sheer stubbornness and grit. You've seen it in 'Rocky'and 'Rudy,' in 'Miracle' and 'Hoosiers.'

In sum, the drainpipe is to the Macs as the steps of the Philadelphia Museum of Art are to Rocky.

The difference here, though, and this is what makes 'The Mighty Macs' important, is that the athletes in this instance are women. Running defensive basketball drills is very, very unladylike behavior, particularly when said drills are run through a drainage pipe, and most especially when the setting is the winter of 1971.

In 1971 we're talking about, the first season in which the women's game adopted the same rules as the men's game, which is to say, basically the rules and you and I know as basketball.  There was no women's tournament to determine a championship -- why would there have been? The game they played was in no way, shape or form basketball. In 1970, while boys and men were running the floor, picking & rolling, fast-breaking and setting screens, their female counterparts were standing around the court, prohibited by rule from crossing the half-court line, from dribbling more than three times, or frankly doing anything vaguely athletic. Foursquare is more challenging, both intellectually and physically. It was a past-time which had more in common with Parcheesi than basketball.

Cathy Rush, then just 25 years old herself, entered the world of coaching right at this moment, when girls were finally permitted to, and expected to, dribble and run, and play a game which required quickness, endurance and creativity.

The movie doesn't answer the question I've always had:  how did Rush master the 'new' game so quickly? I've often wondered if her youth and inexperience were a decided advantage, in that she didn't have any entrenched bad coaching habits to shed in order to suceed.

The other failing of the movie was that the players were stock, cardboard cut-outs representing one type or another. There's the black girl, the engaged girl, the frivilous girl, the big girl and the poor girl (although, the moment when the poor girl pulls on plastic bread-bags before putting on her wet boots resonates with anybody who grew up in the 1970's in a Catholic household.) The problem is not simply a cinematic one. The real-life players here grew up to influence the game immeasurably, particularly  Theresa Grentz and Rene Muth (then Rene Portland.)


In women's basketball, all roads lead to Immaculata.

Portland and Grentz were integral to that Immaculata team, the one which inspired the bucket brigade (the nuns used to bring buckets to the games and bang on them), the team which won the first three women's national titles ever (1972, 1973 and 1974), and both became successful college coaches. They trained and coached some of the best players of the next generation, and mentored many who went onto coaching, too. (Of course, any discussion of Rene Portland's coaching prowess must be balanced against her noxious off-the court homophobia at Penn State.)

300 miles away from Immaculata, here in Pittsburgh, one cannot escape the reach of the Mighty Macs.

Ferne Labati started her coaching career as an assistant to Cathy Rush at Immaculata, before going on to coach the University of Miami, where she won two Big East titles. The tireless coach now works at Seton Hill, less than an hour from downtown Pittsburgh.

Agnus Berenato, the dynamic coach at Pitt, played her college ball at Mount St. Mary's where she played against teams coached by Rush (and Labati.)

Suzie McConnell-Serio, heading into her fifth year as head coach at Duquesne in downtown Pittsburgh, is a direct lineal descendant from the Cathy Rush coaching tree, having played her college basketball at Penn State for Rene Portland (McConnell was the NCAA all-time leader in assists until March, 2011, when Courtney Vandersloot passed her), then played on Team USA in 1992, a team coached by Teresa Grentz.

Over the last few years, I've been lucky enough to  interview and spend time with all three of those remarkable women. Each one lit up at the chance to tell stories of her connection to Immaculata. Because they all understand that without the Mighty Macs, there's no Skylar Diggins or Maya Moore, there is no Lisa Leslie or Cheryl Miller. Personally, I would even posit that without the Macs, the road for Mia Hamm and Hope Solo is tougher, full of dark, rough terrain into uncharted territory.

Every generation of athlete looks to their childhood heroes for inspiration. For women, it's often hard to find athletic heroes and role models. So if the movie 'The Mighty Macs' is less than perfect, at least it tells the story of these women pioneers for a new generation of girls. And that's good enough for me.
Posted by JODY DIPERNA at 11:15 AM