Is the NHL Really Serious About Head Injuries? Only Time Will Tell 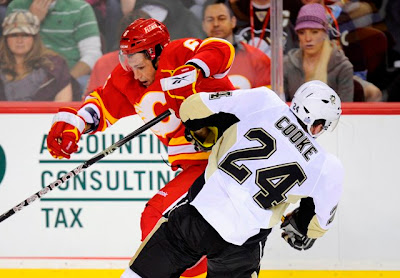 On Saturday night in Calgary, notorious head-hunter Matt Cooke took a flagrant elbow to the head courtesy of Flames defenseman Cory Sarich. After the hit, Cooke was very shaky and missed the remainder of the 2nd period, though he did return in the 3rd period.

Who cares if Matt Cooke gets hurt? After all, he's hurt enough guys in his time, right?

I care if Cooke is victim of head-hunting and not just because I'm a Penguins fan. I care because I think this is exactly the sort of hit the NHL can use to send a message.

For years, the league has said they were serious, but then issued suspensions in hit or miss, willy-nilly fashion. They've show little, if any, consistency and even less resolve.

With this hit, new disciplinary czar Brendan Shanahan can take a step toward eliminating head-shots by suspending Cory Sarich for this hit.

Last year, the suspension given to Cooke at the end of the regular season and which ran through the first round of the playoffs, sent a message to Cooke loud and clear. It sent a message which he says he heard. Cooke says he is a changed man and that he will play physically without cheap shots, without head hunting and without being a danger on the ice. If we can just from the very small sample we have (just two games into the season), Cooke is contributing without being a menace. He's playing hard, but clean. And it's a pleasure to watch because Cooke is more than just a big hitter -- he's a guy with legitimate hockey skills. I hope this continues. I'd like to watch him play hard for years to come, without ever seeing an opposing player laying lifeless on the ice due to a Cooke hit to the head.

One less head-hunter in the league is an absolute good. I'd like to see even more guys clean up their acts. And I'll believe the NHL is really serious about eliminating head-shots when Shanahan suspends a star like Zdeno Chara as well as recidivist goon Jody Shelley.

As to Sarich's hit, Flames coach Bruce Sutter said that was the kind of hit he didn't want to see eliminated from the game. He couldn't be more wrong.

And in Calgary, the debate rages over whether Sarich's hit was clean or not clean. It misses the point.

Shanahan can make his message clear to everybody in the NHL by suspending Sarich for going to Cooke's head.

This is what it means to protect players. It means pulling the trigger on suspensions for players who put dangerous hits on even the most egregious goons. It means suspending superstars who who deliver reckless, high hits. Discipline cannot only be in the form of suspending a recidivist for hitting a star.
Posted by JODY DIPERNA at 3:04 PM