Is Louisville's Take Down of Baylor the Biggest Upset Ever in Women's Hoops?

In 1985, John Thompson's Georgetown Hoyas were a sight to behold. They didn't just win. They weren't merely satisfied to beat teams -- they destroyed them. I mean this in the nicest possible way, but they were like the Roman Legion descending. Nobody would admit it, but other teams were scared. And even if those teams weren't scared, their fans were. They gave up all hope upon seeing the dreaded G'Town on the schedule. Your team was going to lose to the Hoyas. The question then became -- how bad of a loss did it have to be to cross over into embarrassment territory? 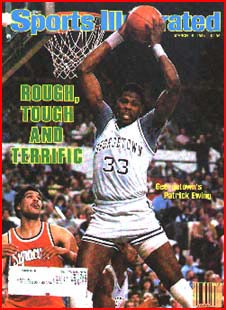 And I'm not talking about G'Town scheduling some mid-majors to pad the schedule; I'm talking about Georgetown smoking the big boys in the Big East. Yeah, they lost a couple of games mid-season, but they were rolling by the time the NCAA tournament came around. People didn't think that Georgetown would win the tourney:  we knew they would win it. They had the unstoppable seven-footer, Patrick Ewing in the middle, the single most dominant force on the hardcourt. Period. There was no argument about that, not even from Syracuse fans. Like it or not, if you had to play the Hoyas, you had to deal with Ewing. And that usually meant watching your shots be batted into the cheap seats and being 'posterized' with a dunk at least once during the game. It wasn't all Ewing, but he was the most terrifying part.

And then this happened:  Villanova 66, Georgetown 64.

If you lived through it, you probably remember where you were. Myself, I was a freshman in college, watching on a tiny black and white television in the living room of the third floor of my dorm. I can't remember what I was studying that semester, but I'll never forget that game, so long as I live. It was so shocking that the memory lingers. If you asked me who won the tourney in 1987? I'd have to google it. But I don't have to google the 1983 game (the amazing Jim Valvano and NC State upset) and I sure as heck remember the 1985 game. I remember the winner, the loser, the score. Mostly, I remember being stunned.

The way I felt about Georgetown back then is just how I felt about the Baylor Bears with Brittney Griner. I didn't think that Baylor would win -- I knew they would win. Did Notre Dame or UConn have a puncher's chance to take them down? Sure. A chance. A small one. Somewhere in the ballpark of a 5% chance, if everything broke right, if they got a little lucky, if they played a perfect game. And then this happened:

In the Sweet 16, no less. Where does this epic loss rank? Some have pointed to Harvard's upset of Stanford in 1992. Stanford was a #1 seed and Harvard a #16. It was a first round take down, a huge shock. That said, most who were seriously involved in women's hoops at the time said that Stanford had suffered debilitating injuries and in no way were up to that #1 seed. And that Harvard was woefully under-seeded. This match up should have been more like the always slippery #5 v #12 seed in all likelihood.

This year, here's how I saw the teams.

And a small gap.

Then there was UConn and Notre Dame.

Then another small gap.

Then there was Stanford.

Then there was a gap.

Then there was a group of about 20 good teams.

Then there was a group of decent, but undersized team or just mediocre teams.

Then there was a pile of shit. (Sadly, my Pitt Panthers fall into this last category. Anyway.)

All of which is my long-winded way of saying that all No. 1's are not created equal. Baylor's No. 1 seed > than Stanford's No. 1 seed. Heck, Stanford lost this weekend, too, to Georgia in the Sweet 16 and NOBODY is talking about that. We're all talking about Baylor, Baylor, Baylor, because Kim Mulkey's Baylor team was dominant, because, like Ewing and the Hoyas, they seemed to be an unstoppable force, because other than one regular season loss to Stanford (when they didn't have Odessey Sims on the court), they rolled. They were an avalanche. That's just how unstoppable they looked.

I believe that if Louisville and Baylor play ten times, Baylor wins nine.

But last night, Jeff Walz' Louisville Cardinals played fearlessly. They played like they were the bullies who had been terrorizing the NCAA all season. They were in Griner's face and she seemed strangely passive. They shot sixty-four percent from the three-point stripe (64%!). The Cardinals might have blown out Baylor had it not been for the heroics of Odessey Sims, who single-handedly willed the Bears back into the game. Louisville still managed to hang in there, even when their best player, Shoni Schimmel, fouled out with over four minutes to go. They were loose and cocky and free. It was the perfect storm of attitude, daring and a bit of luck. It was a sight to behold.

What does this mean going forward? It means that no behemoths are untouchable and that translates into   depth of field developing.

Depth of field doesn't develop in one season or even ten. For nearly 70 years, the women's game was this bizarre game which more resembled four-square than an actual athletic endeavor.

Let me back up. At the very beginning, women took up the sport that Dr. James Naismith invented in 1892, using the rules that he created. Then in the early 1900's the rules changed to 'protect' women. (Sigh.) The halves were shortened to 15 minutes. (God forbid those delicate little ladies break a sweat!) Then dribbling was altogether eliminated. Then it was re-instated -- but you could only bounce the ball ONE time before passing. The court was broken up in some weird way. Basically, six women per side passed the ball to each other, but nobody could dribble (more than once) and I don't believe you ever ran the full length of the court. It was a very un-athletic game.

This went on until 1971. Bear in mind, by 1971 the legendary John Wooden had already been coaching at UCLA for 23 years. So for all that time, from 1892 onward, while the men's game was permitted to evolve  pretty much unimpeded (except, of course, for this nation's nasty problem with segregation), the women lived through 68 years of the equivalent of the Dark Ages. Nothing changed. Nothing grew. No ideas blossomed. It was boring. It was stultifying. Why would you even want to play that game?

So yeah, the women's game is still behind the men's. That imposed gap manifests itself most strikingly,  I think, in depth of field. But when little Louisville -- a team without a single player over 6' 2", a team that was ranked 17th in the coaches poll, a team that finished third in the Big East -- can take down mighty Baylor? That is on par with Villanova taking down Georgetown. It means I'll always remember this game, where I was, who played, and what it felt like. That, my friends, is the evolution of the game.