I have watched less talented teams in my lifetime in black and gold, but I have never watched a more disappointing team.

No team with those five games on their resume has any business at all in the post-season. And so, the season is over, golf course reservations are made and, frankly, some long soul searching needs to happen at Heinz Field. Not to overstate this, but the Steelers have some things to figure out. Every time they were presented with an opportunity this season, they fell short -- sometimes by a hair and sometimes by a country mile.


Still, the Steelers defense kept them in games and, to my mind, won quite a few of those games. To cough the ball up eight times in Cleveland and still only allow 20 points? That's an amazing defensive performance. The defense played well enough to win both games against the Ravens (and did win the second match up) and also well enough to beat the Bengals at Heinz Field yesterday. Had the offense pulled their weight at all, we're looking at 12-3 team at best, or a 10-5 team at worst.

Which brings me to the dreadful Steelers offense. There's no other word for it, is there, besides dreadful?

Every first down they managed was painful, every pass completion a struggle, every four yard run seemed to start as a loss. Every little inch of turf gained on the offensive side of the ball was an epic struggle worthy of  Sissyphus. In short, the offense was positively abysmal.

The Steelers offense is to a root canal:
a) more fun
b) less fun
c) a bathtub full of Terrible Towels.

The answer, obviously, is (b). Watching that offense was like listening to a middle school band's practice on the first day of school, all un-sycopated, flat, off-key, and atonal. The word turgid doesn't really even do it justice.

We cannot avoid this fact:  right now, December 24th, 2012 the Steelers are a mediocre team. Bad teams are on the wrong end of the giveaway/takeaway ratio and the Steelers certainly are that, gifting the ball to their opponent 30 times this season (a number that is good for sixth worse in the NFL.) Is it any wonder they are now on the outside looking in? There is much work to be done to crawl out of this miasma of mediocrity, starting with the turnovers.

Read on for a specific breakdown of what went wrong. 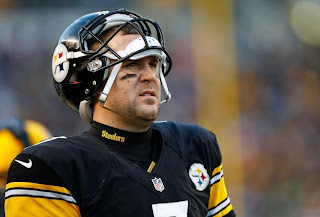 Whatever you think about Pig Ben away from the football field, the Steelers franchise QB used to be the best closer in the game, freedily rolling up comeback win after another, padding his resume with game winning drives, dragging his team to victory in mid-season games and in the post-season, too. To be sure, there were knocks on the guy and chinks in his game, but the one thing I always thought was, 'with the game on the line, I want the ball in that guy's hands.'

This year, he's lost that. He's only thrown eight INT's all year, but those INT's came at awful moments -- moments when the team couldn't bail him out. Perhaps he doesn't trust his OC (more on that later.) Maybe he doesn't trust his receivers (understandable.) He certainly knows the team cannot run. So maybe he's trying to do too much or force the ball. Maybe it's something else altogether, but he has become undeniably reckless with the game on the line. I cannot recall another time in his career when I thought that Pig Ben shouldered the lion's share of fault for a Steelers loss, but this season he has contributed mightily to the losses. Here's a stroll through just a few of his miscues and missed opportunities.

And of course there were the blown opportunities to win in both Tennessee and Oakland and which the once fearsome closer managed to ... simply ... wimper ... and crawl away.

Ben has to play better in the clutch. Words previously said by nobody. Ever. But today, the unthinkable is thinkable. 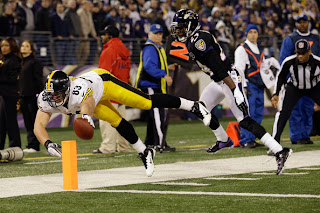 Of course, other than old reliable Heath Miller (get well, soon, Heath!), Ben's receivers very rarely helped him out. Young Money Crew, Mike Wallace, Antonio Brown and Emmanuel Sanders were supposed to be the strength of this team but instead are a glaring weakness. At times, I think that in the hands of a more literary type, the receivers would serve as a metaphor for everything that went wrong this season.

Officially, those three guys coughed up the ball six times. Officially. But it's more than that. They didn't help out their QB at all. The bobbled passes, flailed at passes, batted balls up in the air, rarely fought for position on defenders and sort of passively allowed at least a few of the INT's thrown by Pig Ben, Byron Leftwich and Charlie.

After the Steelers lost to the Bengals on Christmas Eve Eve, I watched the Ravens beat the Giants and then Iwatched the Seahawks roll up on the Niners. And you know what I saw from both winning teams? Wide outs who made plays. Receivers went and got the ball (or at the very least prevented a defender from getting to the ball.) I saw guys who helped out their QB when he was in trouble or made a slightly off throw. I saw absolutely none of that from the Steelers receivers this year. If a pass didn't hit them square between the numbers, they didn't make the catch and sometimes, even with a perfect pass, they dropped or bobbled it. 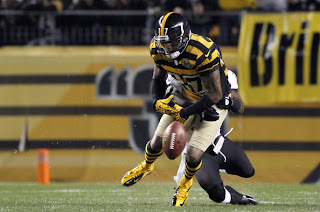 To me, they looked distracted. After a good start to the season, Brown seemed completely unnerved by his mid-season injury. Mike Wallace seemed like he was thinking about his contract when he should have been thinking about catching the ball. And I have no idea what was up with Manny Sanders.


The remarkably mediocre running back corps didn't help much and between Pig Ben, the No Money Boys and RB by committee, the Steelers gave the ball away 30 times this year, a number that is good for sixth worse in the NFL. Is it any wonder they are now on the outside looking in?

A defensive breakdown later at this station, yinzers. At least we have the Penguins ... oh shit.