Favorite Moments from the 2012 NFL Season

I know something amazing might happen today, the final regular season week of the NFL, but the following have been the most entertaining moments of the season for me. Hey, one team which shall remain nameless (but is spelled 'J-E-T-S, Jets, Jets, Jets') makes the list three times. Three!

10.  The Resignation of Fireman Ed as the ad hoc head cheerleader for the New York Jets. Can you actually resign from this sort of thing? Is there a letter or some formal written notification that must be submitted? Did Fireman Ed call up Woody Johnson and tender his resignation? How did this go down? I want to know.

9.  Tags Laying the Boom on Goodell's Bountygate Ex Cathedra Pronounciation. The best part about former commissioner Paul Tagliabue's ruling on Bountygate was that it put Roger Goodell in his place. As a bonus, we got to witness Goodell at his most Goodellian, immediately pivoting to talk of expanding the playoffs from 12 teams to 16 teams (eight per conference.) If that stupendously brilliant plan were in place right now, you would see in the playoffs, the Bears (9-6) and the Cowboys (8-7), as well as the Steelers (7-8) and the Dolphins (7-8). Yup. That's what Goodell wants to do. And probably have the Super Bowl in London. 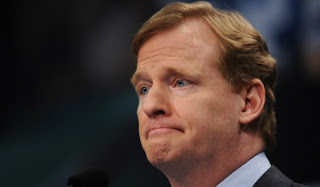 8.  Replacement Refs. More fun with Roger Goodell. The replacement refs. Oh, the countless hours we spent watching lingerie league officials flail around to make calls, muddle through the byzantine NFL rulebook, not be stampeded by an (understandably) angry professional workforce and essentially call games the way one might if one watched through an executioner's blindfold. As the video below illustrates. Good times. (Although I suspect Packers fans do not feel this way.)

7.  Tim Tebow on the Sidelines while the Jets run the wildcat. A couple of weeks away from the end of a miserable season, Sexy Rexy and the Jets ran the wildcat. Without Tim Tebow. Ryan turns to the guy on the sidelines, "Okay. Wildcat! Get in there! Uh, hold up there Tim. Where are you going?" Ouch. At which point, it seemed like Ryan was just fucking with both Sanchez and Tebow. And, of course, now, heading into the last week of a season in which they are jockeying for nothing more than draft positioning, Tebow says he won't run the wildcat if called upon to do so. Is there a more dysfunctional team in the NFL? Nope. Didn't think so. 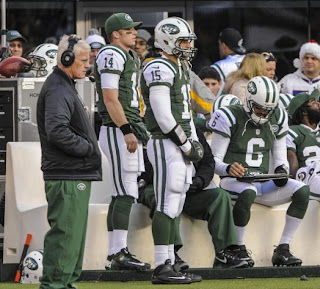 6.  Jim Harbaugh's Thanksgiving Shout Out. Anybody who knows me know that I think the Harbrothers are good coaches and total d-bags. I stand by that, but still, Harbaugh's gobble, gobble, turkey gobblers presser is one for the ages.

5.  Clean My Glasses, Son. If Jerry Jones were a politician, this would be the moment in which he lost the election. I can just hear the post-election chatter over at CNN with their 87 experts talking about how he couldn't connect with the average voter and the party needs to find a way to reach out to people who clean their own glasses. And then Wolf Blitzer yelling something. Meanwhile, over on Fox, Karl Rove would be dissembling and sputtering about the liberal media conspiracy, claiming that real Americans want other people to clean their glasses for them. 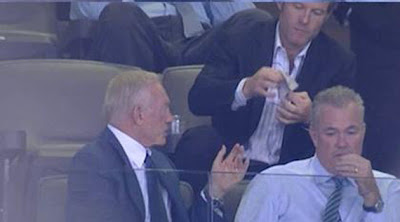 4.  Smokin' Jay Cutler meme. Although he'll always be Sir Pouts A Lot to me, faster than Mitt Romney could say binders full of women, some funny folks on the interwebs created the greatest tumblr page ever. Ladies and gentlemen -- SMOKIN' JAY CUTLER. You're welcome. 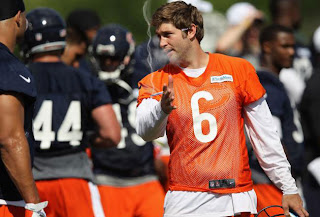 3.  Flacco-ing. Last year, the NFL gave us Tebowing, this year, it's Flacco-ing. Man, am I looking forward to the playoffs.

2. ButtFumble. I am torn, between posting this picture: 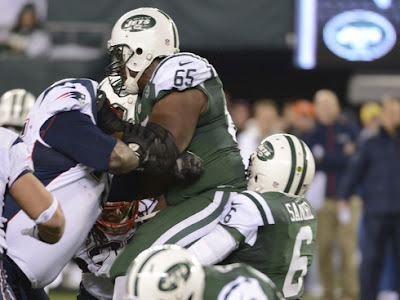 ... and this picture, which so beautifully explains everything you need to know about Jets fans. In fact, if aliens were to land on earth and I were to try to explain a certain segment of the population, I would just show them these two photos in sequence. My work here is done. Then I'd leave them to mess about on the great buttfumble tumblr. 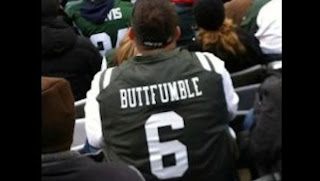 1.  U Mad Bro?! Richard Sherman taunts Tom Brady on the field. And then again on twitter. Oh brave new world that has such people in it. 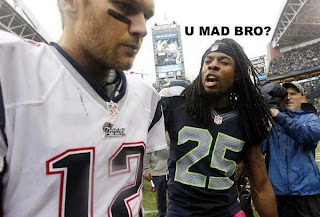