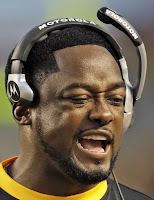 Every coach has one. You can point to it with even the most successful of coaches. Some coaches are great tacticians (usually on one side of the ball or the other), but aren't good with personnel. Some are great at preparing their team, but not so good in game situations. Some are terrible clock managers. The knock on some guys is that they simply can't win the big one. And those are the good coaches, bear in mind.

In the five years that I've watched Mike Tomlin, I wondered about his flaw and how it might manifest itself. After the Steelers shit the bed against a bad San Diego Chargers team at Heinz Field on Sunday, I realize what that flaw is -- his teams underperform against 'lesser' teams.

Call it an achilles heel or a blind spot, this seems to be an area where he struggles. Maybe he lacks a specific talent or an ability to see this as a problem. Whatever it is -- willfulness or simply a skill deficit -- this is more than a trend. It has become a very pronounced pattern.

No doubt, that's a bad stretch. It's a bad season. Frankly, Sunday's performance against the Chargers was disgusting. But this isn't the first time we've seen this movie. Back in 2009, after dropping three straight games in the month of November (to the Bengals, the Chiefs and the Ravens), Tomlin promised to 'unleash hell.' And the team promptly went out and laid a turd against the Bruce Gradkowski led Raiders (at Heinz Field, no less.) Oh, and the Raiders finished 5-11 that year. [Context. Ouch!]

Despite those four ugly losses, a win the next week would have kept the Steelers in the playoff hunt. So they  lost to the Cleveland Browns. At home. On a night when Brady Effing Quinn was the QB. Unleash hell coach? Seriously? It was more like roiling around in the Ninth Circle of Hell, with Phil Simms providing the soundtrack. (Something more repellent than even Dante himself was capable of imagining.)

This is not to belabor the point or just heap criticism on Tomlin (because I think he is a good coach), but rather to identify the pattern. This is not a blip. The Chargers loss was not the occasional fluke game that gets away from you. These losses -- to the Raiders, Titans, Browns, and Chargers -- have not happened in a vacuum. THIS happens to Mike Tomlin coached teams: 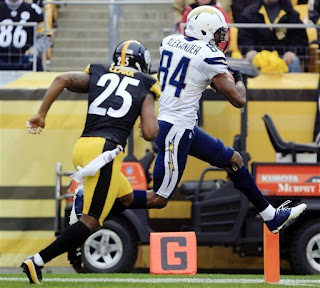 they lose to bad teams much more often than teams with this much talent should.

And now, for a dose of perspective.

Before Mike Tomlin arrived in town, Pittsburghers spent nearly 15 years with William Laird Cowher, a wonderful coach who had a very specific blind spot:  he believed that the quarterback position just wasn't that important. Not that it wasn't important at all, but he didn't recognize how important it really was. He believed this so deeply, in fact, that he started such luminaries at the single most important position on a football field as:  Neil O'Donnell, Mike Tomczak, Kent Graham (Kent Graham?!), Jim Miller (who?), Kordell Stewart and Tommy Maddox. Hardly a murderer's row of passers.

The knock on Cowher had been that he couldn't win the big one, but I believe he couldn't win the big one because he didn't have a QB who was actually up to the task. Except for the 1994 AFC Championship game [which his team lost to a journeyman QB named Stan Humphries], Cowher's teams lost a SB to the Troy Aikman Dallas Cowboys (1995), and also lost AFC Championship games to John Elway (1997) and Tom Brady (2001 and 2004). Those guys -- Aikman, Elway and Brady -- all Hall of Famers.

And yet Cowher didn't really see the need to upgrade at QB. The blind spot was that bad. It was so bad that the team nearly passed up on franchise QB Ben Roethlisberger in the 2004 draft. [Cowher wanted to take OL Shawn Andrews. In fairness, Cowher did want Phil Rivers, but once Rivers was gone ... you get the idea.] 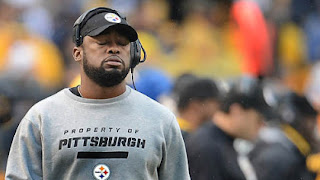 I also suspect it is something which can be corrected, but which will take a good deal of soul searching, work and effort on his part in order to correct. I think he's capable of it. But the clock is ticking now. The window of opportunity with Ben Roethlisberger is closing. The team cannot waste anymore seasons with Pig Ben under center. They have to fix this and they have to fix it now.

Coach, you're on the clock.
Posted by JODY DIPERNA at 7:40 AM