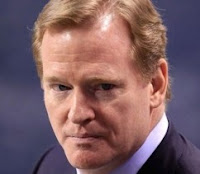 In his tenure as NFL commissioner, Roger Goodell frequently talked out of both sides of his mouth.

"I'm for player safety," he says, while at the same time asserting, "The NFL desperately needs an 18 game regular season."

He has doled out suspensions like the most popular house in the neighborhood doles out Snickers bars on Halloween. At the same time, he awkwardly hugs every draft pick as they walk across the stage on draft day.


Goodell's inconsistency (some might go so far as to say hypocricy) has been a burr under my proverbial saddle for years. All of which was exacerbated by the fact that the NFLPA, foolishly, did not insist on some reasonable checks on the Commish's power in negotiations for last year's CBA.

And then came BountyGate. (A moment to say, the whole 'gate' thing bugs. Can we figure out a new thing? Thanks.) So the whole bounty scandal. Judge Dread swooped in and threw down suspensions right and left, suspending four players for the entire season. In a sport where youth is king and every week matters, this is huge.

This is not the Ben Roethlisberger suspension (four games) and it's not equal to the suspension of head coach Sean Payton, who theoretically can coach to a ripe old age. No, for Jonathan Vilma, Scott Fujita, Anthony Hargrove and Will Smith, that suspension could equal 10% of their entire careers and, likely, an even higher percentage than that. (In the case of Hargrove, an unsigned FA, it's a much, much higher percent right now.)

Vilma tweeted that victory was his. And it was. But it's a bigger victory than one player, or four. It's a slap back on a classic over-reach by a guy who has been able to dictate policy willy-nilly.

But I am always a fan of anything that checks unchecked power.