Where NFL Replacement Refs meet Gary Bettman and the NHL

The New York Times reports that many casual football fans are turned off by the mind-meltingly slow pace of NFL games due to the dithering, amateurish replacement officials. The NFL's lockout of their regular refs, it seems to me to me, presents not merely a chink in the previously impenetrable armor of the NFL, but a wee bit of a vacuum. If fans are turned off by the length and pace of NFL games, might they be inclined, I dunno, to watch something else?

It is a vacuum (however slight) that could be, and should be, filled by hockey. Hockey can easily sell itself to disenfranchised football fans. After all, both football and hockey are fast and violent, both require precise teamwork and vision, and both are sports where players sometimes do things that we ordinary mortals cannot even conceive of.

And to exploit this opening ... Gary Bettman and the NHL have engaged in a pissing contest with Donald Fehr and the NHLPA. Talk about murdering the goose that lays the golden eggs. 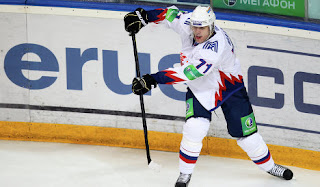 What is most worrisome is the (very real) possibility that hockey will waste an entire, gift-wrapped, perfect storm of a season. Both Fehr and Bettman have previously proven that they are willing to screw fans and lose fans for large chunks of time -- Fehr when he lead the MLB players union during the 1994 strike, and Bettman as he oversaw the NHL's 2004-2005 lockout.

This current hockey lockout began about two weeks ago.  Bettman and Fehr are playing their expected roles to the hilt, fomenting stalemate and bitterness. Bettman fiddles while Fehr plays with matches, to simplify matters. Hockey training camps were canceled, as were all pre-season games. Some players have signed to play in Europe -- notably, superstars Evgeni Malkin, Alex Ovechkin and Ilya Kovalchuk, all of whom are playing in Russia's KHL (Malkin for his old team, the Metallurg Magnitogorsk, Ovie for the Dynamo Moscow and Kovalchuk with the SKA St. Petersburg.)

There have been no talks between both sides since September 12th. Bettman fiddles while Fehr plays with matches, in sum.

Meanwhile, back on a gridiron near you, two weeks into the football season, the biggest story remains not the Arizona Cardinals or the Houston Texans, not Peyton Manning or Patrick Willis, but the replacement officials. 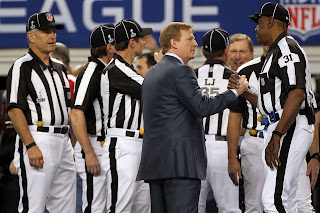 The NFL has locked out the regular officials. Heck, those guys, with years of experience officiating at the highest level of the sport, annoy, irritate, aggravate and just plain make bad calls. And with officials playing a bigger and bigger role in the game in more recent years, pro football has bogged down. I don't mean that it's slow once the players are at the line of scrimmage. From the snap of the ball until the whistle, football is fast, complex and violent. In fact, I disagree with the oft-cited premise that there's only action for 11 minutes of a broadcast -- there is action before the ball is snapped and some of us find that action interesting, too.

Still, football is a game with lulls built into it and I will be the first to concede that there is often too much dead time between plays. [Which doesn't much bother me, unless Phil Simms is the color analyst on the broadcast, because that guy never met a split-second of air time he didn't think he should fill with his moronic prattle.] But as slow as the game may be with regular refs, games are downright glacial with the replacements zebras out there. Things just drag; the officials look befuddled, huddling up to confer before making even the most pedestrian, obvious holding call. Not only can fans make it to the bathroom and refrigerator during one of these lulls, the more efficient among us can make pizza dough, let it raise and get a pie in the oven while the refs huddle together dithering about this call or that. 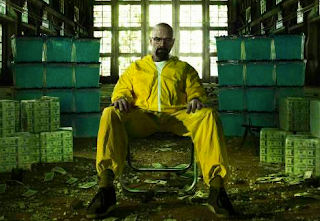 That's turning some fans off. In fact, it's turning a lot of fans off. [I realize that I'm not one of those viewers that the NFL risks losing. (Or the NHL, for that matter.) I am a full-on, long-past hope junkie, a sports skank, if you will. I don't need Walter White's pure blue crystal -- I'll use whatever shitty product the NFL throws out there in front of me. They know that hard-core fans like me won't not watch. That's who I am and I accept this.]

But perhaps, an interminably slow NFL game might  be enough to a few fans away from an NFL broadcast if they had the option to watch a meaningful hockey game between star-studded teams. It is possible, certainly. And it's an opportunity, not matter how insignificant, that then NHL should exploit.

There is a lesson that the NHL can learn from the NFL, a league which is always, always looking to expand it's footprint. The NFL is always concerned with new fans and new markets -- whether trying to hook fans via fantasy football, or globalizing the game, or expanding the season to 18 regular season games. The NFL is always seeking to expand. More is always better. More, more, more. And more! They are the Augustus Gloop of professional sports leagues.

It's not a mindset I adhere to as a rule, but it is one that the NHL could learn something from. If potentially disenfranchised NHL fans aren't enough of a market share to motivate the owners and players to at least sit down together, then hockey's powers that be are bigger fools than the NFL's replacement refs.