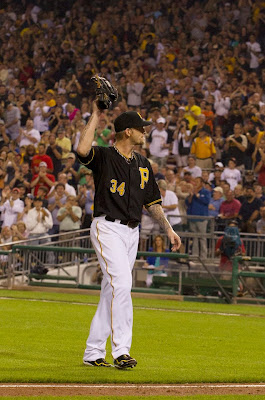 Back here at Bucco Central ... At the start of this baseball season, I was adamant that a winning season -- not a 81-81 finish -- but an actual winning season would constitute success for your Pittsburgh Pirates. Anything less than 82 wins would be a failure.

The Pirates have, so far, exceeded expectations and, in fact, for the Pirates to finish 82-80, they would have to finish the last 59 games of the season at 23-36. So that would actually suck, right?

But the Pirates are not going to go into a 23-36 slump. They are going to remain relevant. They will not go into that good night because Allan James Burnett will not permit it.

Last night, with the Pirates reeling and keeling after two bad losses to two really bad teams, Burnett did exactly what he said he would do -- stop the bleeding. Early in the day, I was running some errands and I was thinking about the Pirates and Burnett, which made me think, "Okay, AJ, you asked for it. Can you do it?"

Yes, yes and another resounding yes. At a crossroads for the Pirates, the kind of game they stumbled through last year, Burnett took the ball and took over, tossing a one-hit gem, shutting out the Cubs and shutting up (at least for one night), the pesky voices of doubt.

When the Pirates signed Burnett in the off-season, I was among the many who wasn't at all convinced he'd be an impact player. Oh, I didn't think he'd turn out as badly as some roster moves, but I thought this was another moment of great sound and fury signifying, well, nothing. I was lukewarm, largely because the Pirates don't exactly have a stellar track record when trading for older players. Beyond which, Burnett never impressed me that much during his stint with the Yankees. The likes of Robinson Cano, A-Rod, Curtis Granderson and Mark Texiera can get you 5 runs a night, so a bloated ERA of 4.79 (over three seasons with the Yanks) is fine, but in Pittsburgh that would spell disaster.

Let me take this moment to formally eat my hat. I don't that I've ever been as wrong about a player as I was about Burnett. Not only has he brought his ERA down (a run and a half to 3.29), he manages to gut out games when he doesn't have his best stuff. Andrew McCutchen is the best player on this team and he may be the best player in the National League, but Burnett has become the emotional leader. When Burnett starts, the Pirates win. And I don't think that's a coincidence.

Joanie loves Chachi. Ricky loves Lucy. Diane loves Sam. And they say that everybody loves Raymond, but honestly, everybody in the 4-1-2 loves A.J. Burnett. And the feeling is apparently mutual. On July 9th, Dejan Kovacevic of the Trib quoted Burnett as saying: "I don't know what got into me, ... I looked around ... the fans cheering for me, for us ... they brought it out. I'm proud to take the mound for the Pittsburgh Pirates. I'm proud, man. I'm proud to pitch for these players, these fans. I could ...I'm not really going to do a good job of putting this into words. I'm just happy to be a Pittsburgh Pirate."

The whole city just gone all Sally Field over the guy -- He likes us! He really likes us!  (And I'm not making fun of Sally, mind you. She may have started her career as Gidget, but that broad's got two Oscars in her china closet.) As Burnett continues to prove his worth, it's up to the rest of the rotation to start doing some heavy lifting.

Meanwhile, at (or near) the trade deadline, Pirates GM Neal Huntington made a bunch of moves, none of them a big Busby Berkley kinda of move, but I like what the moves say when taken as a whole. First, Huntington got left-handed starter Wandy Rodriquez from the Astros (for AAA pitcher Rudy Owens and a couple of other guys). Rodriquez is not the ace of any staff at this point in his career (except maybe Houston's), but he makes the Pirates rotation stronger and also more diverse. It's nice having a second lefty in the line-up.

Then Huntington pulled the trigger on two bats. Here's hoping that a change of scenery will be good for both Travis Snider (acquired from the Blue Jays in exchange for Brad Lincoln) and Gabby Sanchez (acquired from the Marlins in exchange for Gorkys Hernandez and a future pick.) Lastly, Huntington shipped off Casey McGehee to the Yankees for reliever Chad Qualls, which moves seems to me to be designed to simply dump the disappointing MeGehee and pick up an arm to take Lincoln's place in the bullpen.

Did you think that the Pirates were going to pick up Hunter Pence? Or Ryan Dempster? My friends, it's just not going to happen. Huntington has a plan and the plan is to win this year, but it's also a long-term plan. His plan may not work. That's a risk you take. But he does have a plan and I'm as surprised as anybody to find myself thinking this, but I admire his commitment to it.