For many years, I have maintained that Starbucks makes coffee for people who don't actually like, you know, coffee. I suspect that the baristas breathe a secret sigh of relief when confronted with this order:  "large coffee, please," because I see all manner of complicated drinks --- things with whipped cream and syrups and all sorts of other crazy stuff essentially designed to mask the coffee flavor in coffee. I submit Exhibits A and B, pictured to left:  the Starbucks' Toffee Nut Frappuccino and Mocha Praline Frappuccino, respectively. And I rest my case. (Mocha Praline? Really? Who thought up that combo? Paula Deen?)

A week into watching the 2012 Summer Olympics from London, I can say with authority that NBC is to sports what Starbucks is to coffee -- all frothy and foamy and treacly sweet with very little coffee (or in this case, actual competition.) I don't need caramel syrup in my coffee and I don't need personal backstories to create interest in a sporting event.


If there is a competition to see who is faster or stronger or can last longer, I'm in. If there's a team game involving a ball and scoring, I'm down. [The only thing I will not watch is ESPN's coverage of Little League baseball because I think kids should be allowed to be kids, but that's my only limitation.]

In fact, I have yet to learn anything through these personal stories. My viewing is not enhanced by knowing that some (American) athlete sacrificed for her athletic career. I'm going to go out on a limb here -- don't you think that every single athlete who has made it to the Olympics has made unreal sacrifices?

What I do need to create interest, however, is understanding. I watch gymnastics precisely once every four years. The same can be said about a number of Olympic sports. It may actually be impossible to fully understand the bizarre, byzantine and convoluted scoring system used in gymnastics, but you would think that the announcers would at least give it a try. Instead, they tell us it's a good score or a bad score, but we don't know why. Of course, if they devoted any serious time to hammering out the scoring rules, that would cut into valuable air time -- time they could use to talk at length about Danell Leyva's lucky towel. (Who thought it was a good idea to let Ryan Seacrest interview athletes, anyway?)

While we're here, just why did NBC miss so much of the men's gymnastics competition in order to show swimming? The gymnastics in question were finals -- you know for like, medals and stuff. Meanwhile, the swimming was largely preliminary heats. Why so little gymnastics, fellas? It couldn't be because the American men choked like dogs in the gymnasium, but American swimmers were advancing in the pool, could it?

Maybe NBC is on to something. Perhaps, collectively, we are incapable of enjoying excellence because it comes in the form of a team from China. 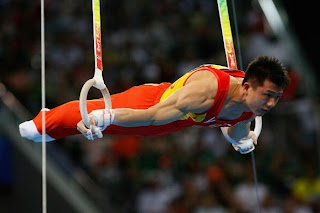 It is sports broadcasting designed appeal to our lowest instincts --  jingoism, xenophobia, small-mindedness. There is an air of sinophobia that would make Douglas MacArthur smile.

But I think we can do better. I know we can do better. And I want to see those crazy still rings, no matter who is hanging from them. (Thanks, NBC, for showing precisely zero minutes of rings in two nights of men's gymnastics coverage.)

In closing, I would like to say, Dear NBC, not only does your hockey coverage suck, and not only does your Sunday Night Football broadcast suck, but your Olympics coverage sucks. You are, quite simply, bad at sports. NBC -- Noxious Broadcasts of Competition. And now you'll excuse me, because my venti sugar-free, non-fat, hazelnut soy, decaf Peppermint White Chocolate Mocha frappuccino with light whip and extra syrup is getting cold.
Posted by JODY DIPERNA at 8:04 PM