The NFL Playoffs, Seeding and Reason 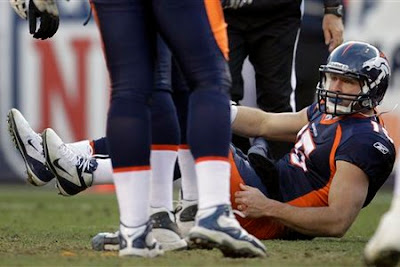 Once again, in the land of the NFL, we have good teams traveling to play el-stinko teams in the playoffs. Last year, when the super-stinko Seattle Seahawks won the crapulous NFC West with a 7-9 record, oh did the talking heads wail. Oh, the 10-6 New York Giants didn't get to play, but the Seahawks were in. Oh, the humanity. At the time, I argued that winning your division should mean something. Even if your division is the bottom of the garbage pail. I think of it as a similar scenario to March Madness -- win your conference and you get an automatic bid. If you perform well, but don't win your conference, you should get a shot, but there are no guarantees.


Because as much as I think the NFC East is often over-hyped, I do enjoy me some Eagles v. Giants match ups.

And because the Bears versus Packers rivalry dates back to the Rutherford B. Hayes administration. (Okay, I exaggerate. But it does date back to Warren G. Harding.)

There is value in rewarding a division championship with an invite to the dance. Familiarity breeds contempt, but there's nothing like seeing a bad team, one with nothing to gain from a win, clawing and scrapping, just because it will screw over a divisional rival. Petty bitterness and enmity -- that's what sports are all about. All of which is to say that the teams which are in the playoffs should be in. But if homefield advantage is just that -- an advantage -- why should teams with records of 9-7 and 8-8, respectively, be rewarded with it? 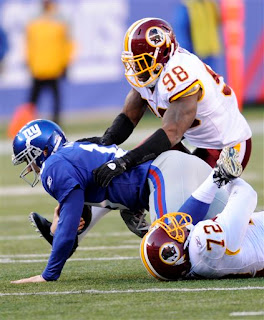 The Giants, while in the middle of a four game losing streak (admittedly to three very good teams), looked like they'd be on the outside looking in when the dust settled. But the NFC East being what it is -- vastly over-rated -- the Giants and their whopping winning percentage of .563 advance to the post-season feeding frenzy.

Worse than the just barely winning Giants are the fair to middling Denver Broncos, who didn't even win to get into the playoffs. Rather, they lost their last three games and were saved by the ineptitude of their fellow sewer dwellers in the AFC West. Heck, they lost their last game to the Kansas City Chiefs, putting just a single field goal on the board with the playoffs on the line, only to win the division anyway because the Oakland Raiders were just flat out worse.

So why do those teams get a home game? Because of some antiquated old tradition that division winners get home games? Heck, that notion dates back to the days of leather helmets, when there were no wild-card teams at all. What I'm suggesting is quite simple -- the invites to the dance go out as they always have -- the four respective division winners, plus two wild-cards. But once the invites go out, each conference will seed the playoffs by record. It's very simple.

What it would mean this year is:

In the AFC, both New England and Baltimore would have the one and two seeds, and the automatic bye. In the NFC, the one and two would be Green Bay and San Francisco, as they are. Here's where it gets fun, though.

Homefield advantage is, presumably, an advantage. You have your home fans there, you don't have a long travel day, field conditions are familiar, and so on and so forth. In the case of the Steelers (not having to go to the altitude of Denver) and the Falcons (playing in their home dome), it would be a big advantage. And, I believe, an advantage both of those teams earned through the season by compiling better records than their opponents.

Simple enough. It is logical, fair and easy. So it will never, ever happen. Enjoy the playoffs, no matter where you are.
Posted by JODY DIPERNA at 6:01 AM