Today, Steelers offensive coordinator Bruce Arians announced his retirement and nary a tear was shed in Pittsburgh, except maybe by Pig Ben Roethlisberger, who was all BFF with coach Arians. 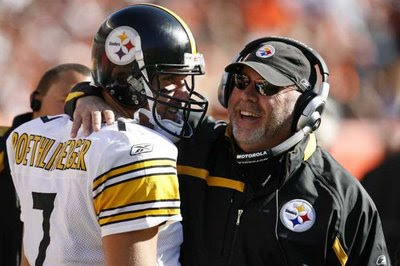 I'm no great supporter of Arians and while it was hard to argue against a guy coming off of a Super Bowl appearance, I felt that Arians' time here was over heading into the 2011 season.

Even with all the givens -- a shortened pre-season and injuries (particularly to an already shaky O Line) --  the team's offensive production was just unacceptable. If you were grading it, it might not get an F, but it  certainly would warrant a solid D.

The Steelers scored just 20.3 points per game -- 21st in the league. Compare that with other elite teams. The Packers clocked in at 35.0 per game; the Saints at 34.2 per game; the Pats at 32.1 per game; and the NY Giants at 24.6 per game. Everybody talks about how offensively challenged the San Fran 49ers were all yaer, but even they scored 23.8 per game. Meanwhile, down in Baltimore, where this week future Hall of Famer Ed Reed said that his quarterback looked 'shaky', the Ravens offense managed to put up 23.6 per game.

When you stop barfing, get back to me.

And also consider this:  with Mike Wallace, Antonio Brown, Jericho Cotchery and Heath Miller at their disposal, the Steelers had just 21 passing touchdowns. Heck, they had just 34 offensive touchdowns in total. Four teams amassed more passing TD's than the Steelers did total TD's. You know what that kind of stat is? Not good. It's not good at all.

I'm sure Bruce Arians is a fine human being, a fine golfer and he knows more about football than I can ever hope to know. So this is not personal. It's just business. It was time for him to go.

His play-calling was too predictable -- if you want to know how many times can a team run a bubble screen, just watch film of the 2011 Steelers to find out. And, frankly, having your big QB run around, tossing off potential sackers for 6 or 7 or 8 seconds does not qualify as actual, you know, 'play-calling.' Particularly when said big oaf is scrambling around on an ankle with as much tensile strength as over-done linguini. 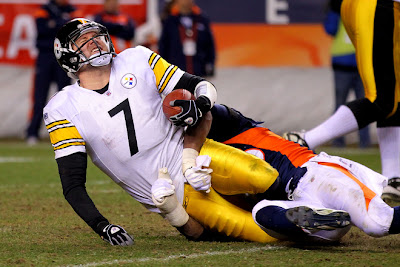 Simply, at the end of the day, the Steelers just didn't score enough under Arians. The offense put up field goals when it should have been putting up touchdowns. It was a problem for the team in their wild-card playoff game in Denver. You can blame Ike Taylor for the Steelers loss all you want (I don't blame you -- the game in Denver was the worst performance of 'Swaggins' entire career), but also consider that the Steelers could have, and probably should have, been up by a score of 10-0, or even 14-0, at the end of the 1st quarter. It might have been a much different game with a lead like that, rather than the overtime soul killer that it turned out to be.

In a nutshell, I'm not sorry to see the guy go. But I am very curious to see who coach Tomlin brings in as his new OC and what that will portend for the future of the team.

Perhaps he will bring in somebody he knows from previous stops in Tampa or Minnesota?

Will he go full-out West Coast style offense with his choice? After all, he was the DB's coach for the Tampa Bay Bucs under John Gruden and while Gruden didn't invent the dink and dunk offense, he certainly perfected it. So Tomlin is familiar with that kind of offense, at least theoretically speaking. He might not be as averse to the idea of a West-Coasty, dink and dunk style, over a smash-mahth style as Bill Cowher seemed to be.

Despite the fact that a quick passing offense may be anathema to certain elements of Steelers Nation, the problem with the Steelers offense has not been that it's a more pass oriented offense, but rather with the style of passing. Perhaps Pig Ben could survive a full 16 game schedule with a quick-passing offense.

As for me, whether it's West Coast or East Coast or No Coast, I'd like to see the Steelers get the ball out of Pig Ben's hands more and more quickly. They have amazingly talented, fast guys in Wallace, Brown and Emmanuel Sanders. What would make me happy would be seeing those guys get the ball in a matter of just a few seconds and then making plays downfield. Frankly, my favorite play in football is a quick slant pass. Not every team has the personnel to turn a slant into a huge play, but when you have guys with as much speed as Brown or Wallace, a 10 yard slant can turn into an 80 yard TD in a blink.

But mostly what I want to see is something new. Whether you liked Arians or hated him, frankly, it was time.
Posted by JODY DIPERNA at 11:27 AM