Up and Down, and In and Out, with the Pittsburgh Pirates 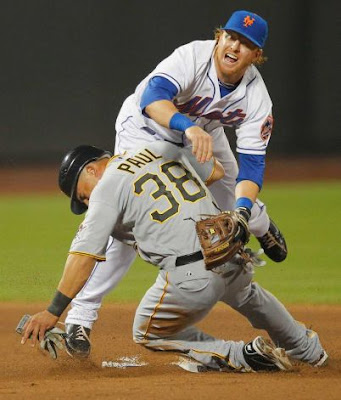 Last night, in front of a sparse New York crowd (just about 25,000, of which 24,000 must have been in the upper decks, because it was mostly empty behind home plate and along the baselines), your Pittsburgh Pirates won their 17th road victory over the Mucking Fets -- as many road wins on June 1st, 2011 as they had throughout the entirety of the 2010 season. Per this morning's Post-Gazette story, the players are downplaying it, but I think that 2010 road trips must have felt like extended funeral corteges. Scratch that, I actually have been to funerals that were more fun than watching the Pirates on the road last year.


Not only have they equaled the number of road wins from last year, they actually have a winning record on the road (17-14, good for a winning percentage of .548.) They've got to find a way to replicate that kind of performance at home, but, you know, inconsistency is a hallmark of a young team. I think William Jennings Bryan said that first, but he was a hopeful guy and after watching 54 games of Pirates baseball this year, I am strangely hopeful, too.

After 54 games last year, the Pirates were 22-32 and while they have just four more wins this year (because I'm not stupid, I do understand that 26-28 is a losing record), they are a little package of possibility. In years past, it felt like they were putting band-aids on amputations, when they weren't self-mutilating shamelessly. This year feels like they're actually building towards something, and they have a legit core of talent -- if they keep them together, ... and if they nurture them, ... and if they add just a few more parts, ... and if the hitting comes around, ... and with a little seasoning ... you can see what they might become. There are flashes of greatness, even now.

Oh wait. I have to go sit down and fan myself, not because the air-conditioning is broken, but because I used the phrase "flashes of greatness" in the same sentence with "Pittsburgh Pirates."

It's way too early for that. I realize a lot of things have to tumble into place. And of course, a young team has to learn how to win, to a large degree.

Take the McCutchen brothers for instance.

Mid-level reliever Daniel McCutchen much better than expected out of the gate, allowing just one earned run in his first eight appearances, but in his last two appearances, he got lit up like Tara Reid, speaking of wasted youth.

Twin brother Andrew McCutchen was went 0 for seven, striking out five times in the first two games versus the Mets, then last night, he was three-for-five, with a run scored, plus he made a magnificent catch in the outfield. 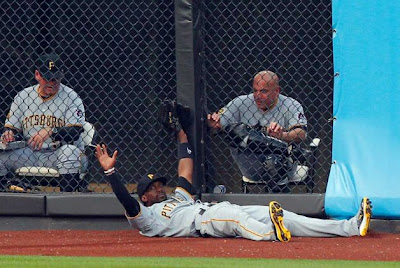 It's not just 'Cutch, of course -- the Pirates' bats have been the biggest source of inconsistency and disappointment. I have to warn you, the numbers are ugly:

** They have the 2nd most strike outs in the NL with 433. That one, for some reason, just pains me more than the others. Like the kind of pain that you call 9-1-1 for.

"I'm having severe chest pains. It's hard to breathe."

"Ma'am, I have to ask this, are you watching the Pirates game?"

"What!? I have a really deep, sharp pain in my chest!"

"Yes, ma'am. I know. But I see that Lyle Overbay just whiffed for the 35th time and I have to ask if you were watching the Buccos game. We've had an on-slaught of calls due to the Pirates propensity to strike out."

"Oh, well, I guess I'll just go get a beer and finish watching the game. Sorry to bother you."

"No problem, but you might want to take aspirin before every game. Have a good night."

And yet, with all the strike outs and wildly variable hitting, the Pirates are only minus one in run differential and are becoming a tough team to beat, because of the pitching. Check out these wonderful numbers: 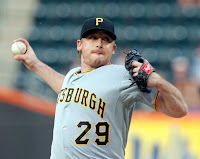 ** Kevin Correia -- tops in MLB with wins with eight.

** 28 Legit Quality Starts from Correia, Maholm, Morton, McDonald and Karstens (by my count -- but your mileage may vary slightly.)

The quality of the pitching is a testament to Ray Searage, of whom we should all be penning folk songs and heroic odes. They are so much better than anybody expected and, I would guess, even Searage himself is probably surprised at how well they are performing.


[Photo credits: mysanantonio.com].
Posted by JODY DIPERNA at 8:20 AM