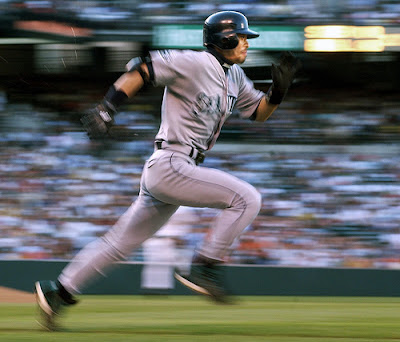 Bud Selig used to love to say, 'chicks did the long ball,' which was kinda creepy coming from a guy who looks like he has Paris Hilton's dog perched on his head, not to mention wrong-headed, as steroid use finally exploded all over MLB and likely tainted Selig's run as commish permanently -- he will be known as "the Performance Enhancing Drug Commissioner," always linked to Mark McGwire's pathetic obfuscations and Barry Bond's giant coconut head.

At any rate, I'm not a huge fan of the home run. I'll take it, mind you. You'll never hear me gripe when one of my Buccos drills one to left field, but this chick? This chick digs speed. Nothing is more exciting than watching players who turn slow infield rollers into singles, guys who can go from 1st to home on doubles, guys who steal bases and make pitchers uncomfortable, speedy outfielders who get to balls in the gap. Speed, brother. That's what I'm after. And if I were a GM, I'd try to build a ball club with speed at every position.

[While we're here, I just want to give a shout out to Pirates skip, Clint Hurdle, for putting Jose Tabata (fast), Xavier Paul (faster), and Andrew McCutchen (fastest) in the outfield together.]

If I were building a team, I'd try to get speed in every position. I realize that pitchers and catchers are pretty unlikely suspects, but there's no reason you can't have at least a modicum of speed everywhere else. (I can't believe that no MLB team has tapped me to be GM. The outrage.)

In the outfield, there are just a ton of fast guys who play the outfield, particularly CF and LF, so I'm drafting five outfielders, all of whom can fly: Ichiro Suzuki, RF, Seattle Mariners. Yeah, he's probably 45 by now, but the guy has 14 steals and can still bunt his way on base.
Michael Bourn, CF, Houston Astros. The Astros are bad stinky, but this kid steals a base every time he gets on base. Not every time, but the kid has been on 1st 73 times and has 25 stolen bases. You do the math.
Coco Crisp, CF, Oakland A's. The name, the hair, the jets.
Andrew McCutchen, CF, Pittsburgh Pirates. When McCutchen first showed up in Pittsburgh (a little over two years ago to the day) I thought Usain Bolt had grown dreds and taken up baseball.
Ryan Braun, LF, Milwaukee Brewers. What can I say? As a Pirates fan, the guy is a huge pain in my ass. But he moves well on the basepaths and he takes away hits with regularity.

The infield is tough because middle infielders are often speedy, but the guys on the corners are typically slow, particularly at 1st base, so when I say 'fast 1st baseman' I don't mean fast like the guys above. But, quickness at first base helps a ton.

Albert Pujols, 1B, St. Louis Cardinals. Hardly the Flash, but five stolen bases for a 1st baseman is pretty good. And he's a complete vacuum cleaner at 1st, showing a good bit of quickness fielding his position. [I actually had to flip a coin on this, because the argument for Joey Votto is so strong. You couldn't go wrong with either guy.] Dustin Pedroia, 2B, Boston Red Sox. I like Pedroia a ton and, since I passed over The Sawks' Jacoby Ellsbury in the outfield, I'll put Pedroia and his 13 stolen bases (most among 2nd basemen) here.

Jimmy Rollins, SS, Philadelphia Phillies. There are probably faster guys playing short stop. I know there are. I really thought about putting Elvis Andrus or Jose Reyes in this spot, but I don't know if there's a fast guy who is more valuable to his team than Rollins is to the Phillies. He's also on my tough-guy list and you know I love cross-referencing.

Placido Polanco, 3B, Phillies. In terms of fielding range and cutting off potential extra base hits, I'm not sure there's a better 3rd baseman than the Polanco. He's only got three stolen bases, but ... he's fast, smart and also, gets on base all. the. time. Two Phils? On one list? God help me, but yes.

Why am I even bothering with catcher? Seriously. What the hell? It would be a no-brainer to take Buster Posey here, but, given the fact that he's out for the season and, for this little exercise, these are guys I'd want to start right now, today, I can't take Posey.

Kurt Suzuki, C, Oakland A's. Why the hell not take the guy who Billy Beane told not to block the plate. He fields his position extremely well and, he's not a proper base stealing threat, but he's quick around the bases and can pull off a good hit and run.

That's it. My all fast guy team, including two Phillies and two Suzukis. What are the odds of that happening? Who are your fast guys?