This week, I was teasing my favorite center in the sport of women's full-contact football and have conferred upon Sarah Young of the Pittsburgh Passion the nickname "Egregious.” She will henceforth be known as Egregious Young. But it made me think of my favorite sports nicknames of all time. I only included guys (and yes, it's all men) who were big time athletes, not random guys who were mediocre players, but had cool nicknames, like Manny Legace ("Legs" or, even better, "The Ferret'"). These are the guys who simply are their nicknames, the ones that everybody knows, the kind that need no explanation.

THE NICKNAMES THAT BECAME NAMES:

These guys had nicknames that were so perfect that the nickname actually replaced their given names altogether. 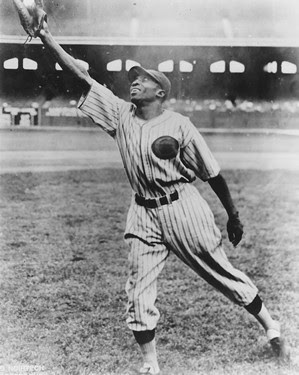 Who even knows Cool Papa Bell's given name? Anybody? Anybody? Cool Papa is so descriptive and it says to me, 'I'm so fast that I make it look effortless to turn a double into a triple, I cruise the basepaths with such confidence and ease that I'm a cool papa.' (Oh, and it's James Thomas, by the way.)


Toe Blake. Raise your hand if you knew Toe Blake's first name was Hector. Hector Blake? Really? I honestly had to look that up, and, according to my reading, he earned the nickname Toe, because his little sister called him 'Hec-Toe' when she was really young. Bonus points because he played on the Montreal Canadiens line that was dubbed 'the Punch Line', so you get two fantastic nicknames in one man.

Magic Johnson. I'll bet that lots of people don't even remember his given name is Earvin. He's just Magic. And not even Magic Johnson, but simply, Magic. You know you're in rarified air when you are a one-name celebrity like Tarzan, Cher and Pele. 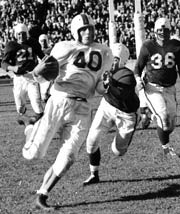 Crazy Legs Hirsch, but his mama called him Elroy. He got his nickname courtesy of Francis Powers, a Chicago Daily News sportswriter who wrote, "His crazy legs were gyrating in six different directions, all at the same time; he looked like a demented duck." If that were the only thing that Powers had ever written, that would be a whole career right there.

Rube Foster. The father of Negro League baseball was always just known as Rube, but his given name was Andrew. Nobody's sure where he got the nickname (although some think it came after he played in a game against a pitcher named Rube Waddell.) I just like the sound of 'rube,' and that it's an old-timey word for an unsophisticated country bumpkin; I like the idea of of some country boy re-appropriating that derisive term as a badge of honor:  'Yeah, I'm a rube. You wanna make something of it?' It's very 'Mr. Deeds Goes to Town' to me and I just like that. 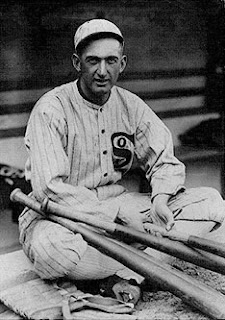 'Shoeless' Joe Jackson. Nobody ever says, "you remember that ballplayer, Joe Jackson? He was with the Chicago Blacksox in 1919?" No. It's always, 'Shoeless Joe Jackson,' or sometimes just 'Shoeless Joe.' He's been the inspiration for two really good sports movies ('Eight Men Out' and 'Field of Dreams' - yeah, I know 'Eight Men Out' is a book, too), his glove was, "the place where triples went to die," and he even nicknamed his bat (he had several nicknames, but Black Betsy was the bat I have heard the most about.) The guy is a treasure trove of anecdotes and nostalgia.

Night Train Lane (Dick Lane). Another one that you just need to say -- 'Night Train.' That's all. You don't even need the last name -- just 'Night Train' could strike abject fear into the hearts of quarterbacks and wide outs, alike. He was one of the most colorful guys in an era when NFL players were organically colorful. No twitter feeds, no PR agencies, no ESPN. Just pure, balls to the walls personality. If you ever get the chance, do read 'Paper Lion' by George Plimpton (on my greatest Sports Books compedium -- Part I and Part II). He has some wonderful Night Train anecdotes. Also, Night Train conferred the nickname, 'Dicky Bird,' on Dick LeBeau.

Per my friend Ernie, Tiger (Eldrick) Woods. Betcha forgot his name was Eldrick. I know I did. 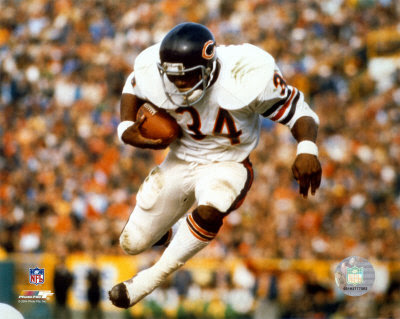 Sweetness (Walter Payton). Everything about Payton's game was Sweet and I don't care who holds the rushing records, Sweetness is the greatest running back I've ever seen. There was something about the guy that was special, beyond his ability to run, to extend runs, to run through and over and around tacklers. Sweetness.

Is there a nickname more descriptive than Mr. October (Reggie Jackson)? Seriously. It's like a koan -- you may not be afraid of me in June, but if you run into me in October? Be afraid. Be very, very afraid. 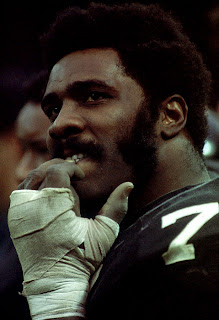 Joe 'Mean Joe' Greene. Sure, he's a beloved athlete in Pittsburgh now that time has given us distance from his absolute ferocity on the field and no doubt his image as one of the baddest men in the NFL was forever altered with his transcendent Coke commercial. But make no mistake, when Chuck Noll drafted Mean Joe Greene to be the foundation of the Steel Curtain defense, he knew what he was doing. Joe was, indeed, mean.

Ed 'Too Tall' Jones. What I love about this nickname is that it's not like 'Too Tall' replaced Ed. It's totally incorporated and it's always, always Ed-Too-Tall-Jones, like it's all one word. I love that. We all say it every time. When was the last time you referred to 'Ed Too Tall Jones' as simply, 'Ed Jones?' Yeah, that'd be never. Thought so.

Sugar Ray. I'm going Sugar Ray Robinson here, but you can fit Sugar Ray Leonard in here, too. Like Sweetness, this nickname says it all about Robinson's abilities in the ring. His science was so sweet, it was like sugar.

Teddy Ballgame (Ted Williams.) One man as the whole game. Some called him the Splendid Splinter, but that always seemed too tortured and forced to me. But Teddy Ballgame? That's a nickname that just sings. 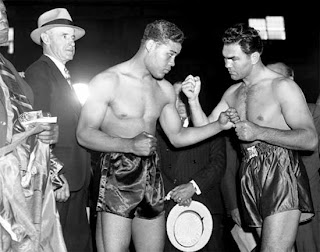 The Brown Bomber (Joe Louis). I have this really deep, abiding fondness for Joe Louis. Maybe it's what he meant to the black community at the time of his rise. Maybe it's the way that he was able to see past the hype and propaganda and develop a deep and abiding friendship with Max Schmeling. Maybe it was that he always called Jim Braddock 'Champ', even after he beat him to win the heavyweight crown. And I love 'the Brown Bomber' because it reflects the color of his skin, something that you can never, ever forget when thinking about Joe Louis living in an era of shameful racism and Jim Crow laws.

THE ONE THAT JUST CRACKS ME UP:

What are your favorite sports nicknames? Why?